Please ensure Javascript is enabled for purposes of website accessibility
Log In Help Join The Motley Fool
Free Article Join Over 1 Million Premium Members And Get More In-Depth Stock Guidance and Research
By Rich Duprey - May 22, 2018 at 9:35AM

The e-commerce giants launches a dry dog food. Will customers eat it up?

General Mills' (GIS 0.05%) $8 billion acquisition of premium pet food manufacturer Blue Buffalo hasn't been well-received by investors, with shares of the cereal maker losing about a quarter of their value since the deal was announced in late February. Sales for cereal and yogurt may have been weighing on the company, but diversifying into pet food apparently wasn't what the market had in mind.

The owner of brands including Cheerios, Chex, Betty Crocker, and Pillsbury hasn't sold dog food in about 50 years, and though treating pets like humans is a big driver in the premiumization trend -- and what launched Blue Buffalo to the forefront of the category -- $8 billion was a hefty price to pay. Standard & Poor's lowered General Mills' credit rating to BBB "because of the substantial increase in leverage" it took on to do the deal.

And now General Mills has to deal with Amazon.com (AMZN 2.07%) entering the market with a private-label premium dog food. 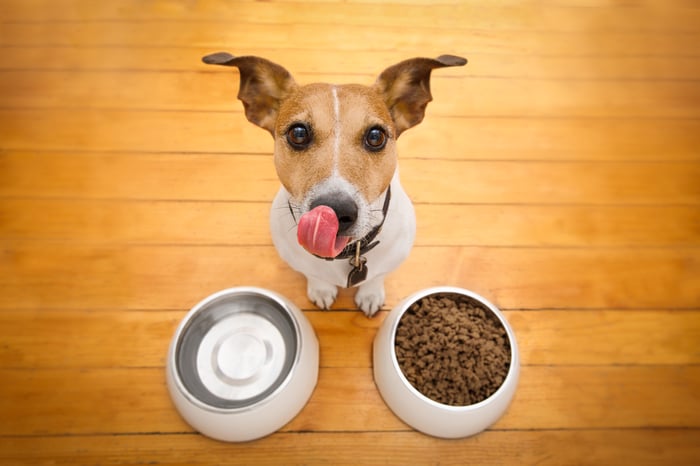 Some may be quick to discount the Amazon threat to General Mills. A few years ago it bought Quidsi, which owned sites like Wag.com, Diapers.com, and Soap.com, but was never able to make them profitable. It ended up shutting them down last year. The thinking may be that if Amazon failed once in the dog food biz, perhaps it will do so again.

But that would fail to account for Amazon being the largest dog food seller in the online space, with a 55% share of the market, according to Packaged Facts, more than twice the share of PetSmart's Chewy.com, which has a 26% share, and PetSmart's own 19% slice, according to the division of MarketResearch.com. PetCo and Walmart round out the top five online retailers with 17% and 14%, respectively.

According to Packaged Facts, pet product sales on Amazon totaled $2 billion last year, a 40% increase from 2016 and a figure it expects to grow, particularly with Amazon's entrance into the premium food space.

Amazon recently launched Wag, the retailer's first major expansion of its pet products business, which will start with dry pet food, but extend to other pet products. This makes sense for Amazon.

The American Pet Products Association says U.S. households own nearly 90 million dogs, and Americans spent $69.5 billion on pet products in 2017, $29.1 billion of which was on food. That's almost 42% of the total, and 70% more than the second biggest category, vet care. The APPA expects almost $30 billion to be spent this year on food.

That, of course, was part of the rationale for why General Mills bought Blue Buffalo. It touted that Blue Buffalo was the top premium brand, generating $1.28 billion in revenue last year and $319 million in adjusted earnings before interest, taxes, depreciation, and amortization.

It also highlighted that Blue Buffalo sold some $250 million worth of food online, a 75% increase year over year, making it the No. 1 brand in e-commerce, with more than twice the share of the second-place manufacturer.

Amazon's entrance has to give General Mills some pause, however. Immediately, Prime members gain the advantage of free two-day shipping on Wag, and it wouldn't be surprising to see the brand show up at Whole Foods Markets. Pet food is already a commonplace item in grocery store aisles, and after buying the organic grocer last year, Amazon immediately began selling its Whole Paws brand online. Wag's premium pricing would also mesh well with Whole Foods' image.

There may have been some justification for General Mills to re-enter the dog food business, but it likely overpaid for the privilege of buying Blue Buffalo's premium positioning, and now that Amazon.com looks to be a serious competitor, it may find the e-commerce leader has plenty of bite to go with its bark.