Please ensure Javascript is enabled for purposes of website accessibility
Log In Help Join The Motley Fool
Free Article Join Over 1 Million Premium Members And Get More In-Depth Stock Guidance and Research
By Steve Symington - May 22, 2018 at 6:23PM

The so-called "Netflix of China" just kicked off its offline movie theater expansion. Here's what investors need to know.

Shares of iQiyi, Inc (IQ 4.05%) popped 11.2% today in a continuation of its recent post-IPO volatility, and as the market absorbed news of the China-based video streaming leader's new physical movie theater expansion.

More specifically on the latter, iQiyi announced it has officially opened its first offline on-demand movie theater, dubbed "Yuke," in Zhongshan, Guangdong. In doing so, iQiyi says it marked "the launch of the company's offline penetration strategy." 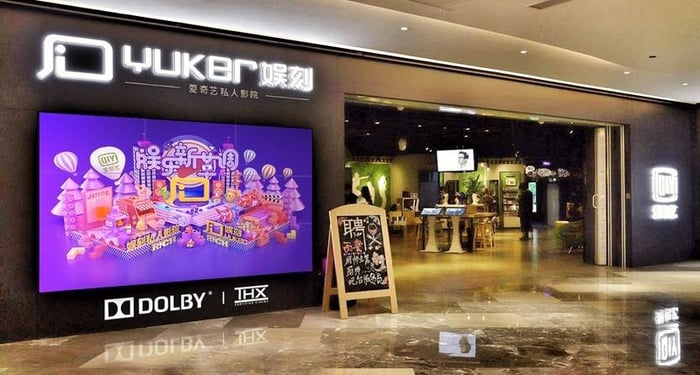 To be fair, today's rally may not be entirely driven by iQiyi's official announcement, which technically hit the wires late Sunday. But it's worth noting that shares initially attempted to pop on the news, climbing more than 4% in Monday's early trading before pulling back along with the broader market to close roughly even on the day. iQiyi has also proven to be extraordinarily volatile following its IPO in late March, often surging or declining without substantial news to drive the moves.

Nonetheless, iQiyi's Yuke initiative is a compelling expansion of its vision for on-demand entertainment. According to the company, Yuke enables customers to select a time, location, and content to be viewed from iQIYI's online movie library, all while enjoying a high-quality audio-visual environment they've come to expect from traditional theaters.

iQiyi also points out that Yuke will create opportunities to integrate retail services and offline consumption of merchandise in those theaters.

Of course, this is only the start of iQiyi's offline expansion. The company further promised it will bring Yuke cinemas to both first- and second-tier cities throughout China going forward.

In the end, whether Yuke proves a hit with consumers remains to be seen. But it's hard to fault iQiyi for its ambition. And it's no surprise to see shares rallying in response.