Please ensure Javascript is enabled for purposes of website accessibility
Log In Help Join The Motley Fool
Free Article Join Over 1 Million Premium Members And Get More In-Depth Stock Guidance and Research
By Ashraf Eassa - May 23, 2018 at 9:11AM

Intel has to do a lot to regain my trust.

I was an investor in chip giant Intel (INTC -1.43%) for roughly six years before finally disposing of my shares earlier this month. I sold my shares because I believe that due to a series of missteps and technical execution issues, coupled with what I believe to be less-than-honest messaging from the company around that execution, the company is at severe risk of losing material market segment share in its core businesses.

Although my view of the company's prospects over the near-to-medium term isn't great (otherwise I'd own the stock), I am open to becoming an Intel stockholder again. However, for me to have the confidence to invest my hard-earned investment capital in the chipmaker again, I need to see the following two things happen.

Intel is a chip company that lives or dies based on the competitiveness of its products in the marketplace. If it's fielding clear leadership products, then not only can the company stand a good chance of sustaining its high market segment share in the areas that it participates in, but it can sustain that market share while maintaining industry-leading gross profit margins (a company can try to defend its market share by cutting prices and ultimately reducing its gross profit margins). 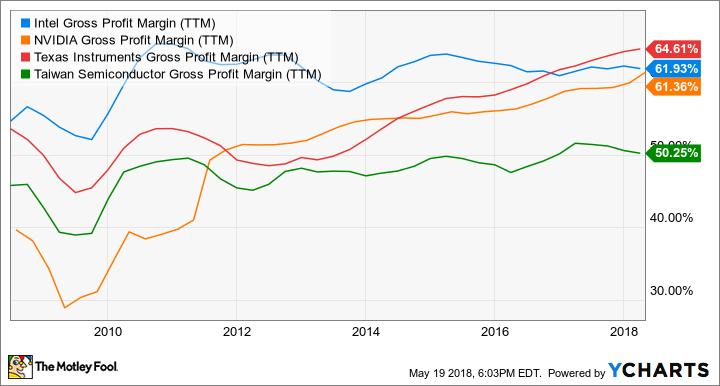 Intel currently sells excellent products across most of its business units, but because the company's upcoming 10-nanometer chip manufacturing technology has been officially delayed into 2019 (it was most recently scheduled to go into mass production in the second half of 2018), the company's competitive positioning is at risk.

Furthermore, there could even be a chance that Intel's competition could start selling 7 nm chips before Intel starts selling 10 nm chips in real volumes. In that case, Intel's competitive positioning could go from measurably worse than it is now to quite poor.

So, one thing I need to see from Intel is reassurance that it will, at a bare minimum, be at manufacturing parity with the competition in the key markets that it competes in. Without that reassurance, I can't see how Intel doesn't lose significant market share in its core data center and personal computer processor businesses, which, combined, made up more than 84% of its revenue in 2017.

Another issue that I have with Intel is that the company doesn't seem to be 100% open and honest with its investors. If I can't trust a company to give me accurate information about the state of its product pipeline, I'm uncomfortable investing my money in the company's stock.

Let's go over what CEO Brian Krzanich had to say about the progress of the company's 10 nm development over the last year.

Here's Krzanich on the second-quarter earnings conference call in 2017:

We'll be shipping our first 10-nanometer products near the end of the year beginning with a lower volume SKU and followed by multiple SKUs and a volume ramp in the first half of 2018.

Then, one quarter later, here's what the executive said:

We're on track to ship our first low-volume 10-nanometer part by the end of the year. That will be followed by the initial ramp in the first half of 2018, with both high volume and system availability in the second half of 2018.

This was a cleverly disguised six-month push-out in the 10 nm production schedule.

Then during the Q4 2017 earnings conference call, Intel reiterated its plans to ship 10 nm chips in high volume during the second half of 2018.

One quarter later, though, on its earnings call in early May, management admitted that its progress in developing its 10 nm technology wasn't going as quickly as planned and then told investors that it wouldn't go into mass production on the technology until sometime in 2019 (Intel's chief engineering officer indicated at another recent investor conference that it could be between 12 and 18 months before 10 nm products would come to market).

The multiple successive delays in when Intel said 10 nm would go into mass production tell us one of two things. Either Intel was highly incompetent and couldn't accurately project the rate at which it would improve the readiness of its 10 nm technology for mass production, or management was giving investors very rosy public expectations that represented more what the company hoped it could achieve than what it expected it could.

If it's the former, then Intel wins back some points around investor honesty and transparency but it looks incompetent, which is also an unattractive quality in a potential investment.

Given how long it takes to develop chips, these 14 nm products were planned for a while, which means that Intel probably knew that the chances of hitting the 10 nm launch timelines that it was giving investors were uncomfortably low.

Intel should've disclosed this to its stockholders. Until I see Intel being more forthright with investors about its future product plans, I'll have a hard time being comfortable in investing a significant amount of money in the stock.