Please ensure Javascript is enabled for purposes of website accessibility
Log In Help Join The Motley Fool
Free Article Join Over 1 Million Premium Members And Get More In-Depth Stock Guidance and Research
By Timothy Green - May 23, 2018 at 1:25PM

Despite a weak earnings report, investors are driving up the stock.

Shares of Lowe's Companies (LOW 0.37%) jumped on Wednesday despite a first-quarter report that missed analyst expectations across the board. News that Lowe's had poached J.C. Penney CEO Marvin Ellison for the top job at the company could be contributing to the gains. Another factor could be news that Bill Ackman's Pershing Square had acquired a $1 billion stake in the retailer. Shares of Lowe's were up about 9.6% at 12:20 p.m. EDT.

Lowe's reported first-quarter revenue of $17.4 billion, up 3% year over year but about $290 million below the average analyst estimate. Comparable sales increased by just 0.5%, impacted by weak sales in outdoor categories caused by unfavorable weather. The company said that sales in May have been strong. 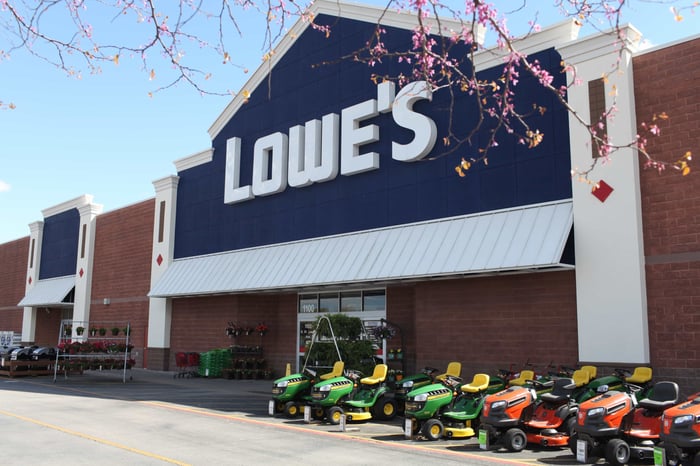 Earnings per share came (EPS) in at $1.19, up from $0.70 in the prior-year period but $0.08 lower than analysts were expecting. EPS rose 15.5% from the adjusted EPS Lowe's reported during the first quarter of 2017. Operating income declined slightly thanks to higher operating costs, but a lower share count helped push up per-share earnings.

For the full year, Lowe's expects sales to rise by about 5%, driven by a 3.5% increase in comparable sales. The company expects earnings per share between $5.40 and $5.50.

While Lowe's missed analyst estimates, the company's success luring Marvin Ellison away from J.C. Penney may be giving investors hope that Lowe's can accelerate its growth. Ackman's $1 billion stake in the company may also be playing a role in Wednesday's rally.

For now, Lowe's investors are overlooking the company's lackluster first-quarter results. Things will need to improve throughout the rest of the year to keep them on board.