Shares of TJX Companies (NYSE:TJX) rallied 70% over the past five years as the retailer continued to win over consumers and investors with its off-price business model. With the stock already up nearly 15% this year, investors might be wondering if they should wait for a pullback before starting a position -- but I think it's still wise to buy TJX at these levels, for four simple reasons.

TJX uses its network of over 1,000 buying associates to purchase excess inventories from more than 18,000 vendors in over 100 countries. It then sells these products at 20% to 60% discounts through its brick-and-mortar chains, which include T.J. Maxx, T.K Maxx, Marshalls, HomeGoods, HomeSense, Sierra Trading Post, and Winners.

TJX's scale enables it to sell products at significantly lower prices than Amazon (NASDAQ:AMZN). It also rotates its products quickly, which encourages shoppers to frequently go "treasure hunting" at its stores. That's why customer traffic at its stores rose for 15 straight quarters.

TJX's gross margin dipped 10 basis points annually to 28.9% last quarter, but its consolidated pre-tax profit margin rose 30 basis points to 11%. Those are impressive margins for a company that regularly undercuts Amazon and other brick-and-mortar retailers.

As a result, TJX's adjusted EPS -- which excludes a $0.17 tax benefit -- rose 17% annually to $0.96 per share during the quarter. Its diluted EPS, which includes that benefit, rose 38% to $1.13 per share. For the full year, TJX expects its diluted earnings to grow 18% to 20%. That's a robust growth rate for a stock that trades at just 18 times this year's earnings. Ross, by comparison, trades at 20 times this year's earnings.

3. Opening stores as others retreat

TJX also consistently opens new stores. Between the first quarters of 2018 and 2019, its total store count rose 7% to 4,141 locations in nine countries, with year-over-year openings across all seven banners. That expansion slightly outpaced Ross' annual store count growth of 6% to 1,622 locations last quarter.

TJX's positive comps, rising earnings, and new store openings all indicate that it's much healthier than other American brick-and-mortar retailers, many of which are closing stores to stay afloat. 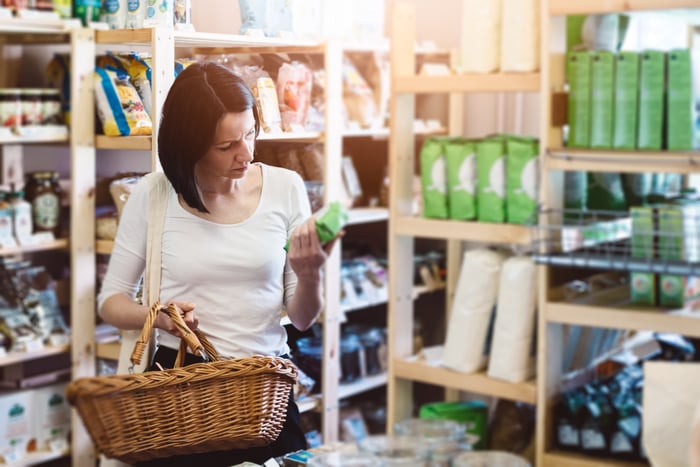 4. Plenty of buybacks and dividends

TJX repurchased $400 million in stock last quarter, and plans to buy back another $2.5 billion to $3 billion in shares this year. It also raised its dividend by 25% in April, marking its 22nd straight year of annual dividend hikes.

TJX's forward dividend yield of 1.9% might not satisfy serious income investors, but its long streak of dividend hikes and low payout ratio (29% in fiscal 2018) indicate that its yield will likely climb over the long term.

TJX's business model is built to last against e-tailers like Amazon. So long as other brick-and-mortar retailers get "Amazoned" and need to dump their inventories at fire sale prices, TJX's business will thrive. Therefore, investors looking for a safe retail play with a decent dividend should consider buying TJX at these levels.