It's been a rough few days for struggling department store chain J.C. Penney (OTC:JCPN.Q). The retailer's first-quarter report on May 17 was a disappointment, featuring almost non-existent comparable sales growth, a tumbling gross margin, and a big loss. Given that this came a day after Macy's put up some solid numbers, it's clear that J.C. Penney isn't benefiting from the strong consumer spending that its rival is seeing.

On May 22, J.C. Penney CEO Marvin Ellison abruptly resigned to take the CEO job at Lowe's. In his time leading J.C. Penney, Ellison pushed the company into the appliance business, added toys to the stores, and expanded the number of Sephora shops. Unfortunately, none of these steps has had any real impact on the company's performance. 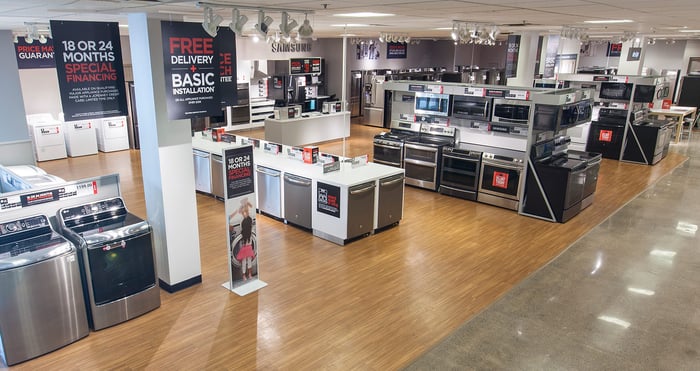 With J.C. Penney's turnaround showing no signs of progress, is there any reason to buy the stock? The only bullish argument left, in my opinion, is the idea that the demise of Sears Holdings (NASDAQ:SHLDQ) and other big-box chains will push sales into J.C. Penney's lap. The company's appliance strategy is tailor-made to pick up some of the sales that Sears is losing as it circles the drain.

J.C. Penney may enjoy a sales boost as other retailers fail. But as an investment thesis, that's about as weak as it gets.

Imagine if I pitched you this investment idea:

Company A is failing more slowly than Company B. They sell some of the same stuff. Buy Company A!

Not very convincing, is it?

Sears was still the No. 3 appliance retailer in the U.S. as of a year ago despite how awful that company has been performing. J.C. Penney doesn't disclose appliance sales, but they're probably a drop in the bucket at this point, given how recently the retailer entered the market. Sales in the home category, which includes appliances, home decor, furniture, electronics, cookware, and a wide variety of other products, accounted for 15% of sales in 2017.

The hope is that J.C. Penney will be able to pick up a considerable percentage of appliance sales that Sears sheds, helping to offset weak sales in other categories, particularly women's apparel. The company will likely pick up some appliance sales. But the assumption that it will be enough to matter seems like a stretch to me.

Lowe's and Home Depot are the top two appliance retailers in the U.S. Each has thousands of stores spread across the country. I'd expect Lowe's and Home Depot to benefit the most as Sears hemorrhages market share. Best Buy was the No. 4 appliance retailer a year ago, and its appliance business has been growing at a brisk pace. During the fourth quarter of 2017, Best Buy's domestic appliance business put up comparable-sales growth of more than 20%. The company is wasting no time scooping up market share as Sears stumbles to its end, and there's only so much to go around.

For J.C. Penney to win a lot market share, it has to convince customers that it's a better choice for appliances than Lowe's, Home Depot, and Best Buy. That's a tall order. How many people are even aware that J.C. Penney sells large appliances? Of those, how many would ever consider stepping into a J.C. Penney store to buy a refrigerator?

This isn't to say that J.C. Penney can't build a respectable appliance business. I just don't think it will be easy. The idea that J.C. Penney will be awash in new appliance customers because it has stores nearby closing Sears locations completely ignores the competition.

Will J.C. Penney benefit from the collapse of Sears? Sure. Will it be enough to ignite a turnaround and put it on a path to consistent and sustainable growth? I doubt it.