Please ensure Javascript is enabled for purposes of website accessibility
Log In Help Join The Motley Fool
Free Article Join Over 1 Million Premium Members And Get More In-Depth Stock Guidance and Research
By Rich Duprey – May 24, 2018 at 8:42AM

Seeking out other buyers for the Kenmore brand is a formality to selling it to the retailer's chairman.

Sears Holdings (SHLDQ) is considering chairman and CEO Eddie Lampert's offer to buy much of the last remaining valuable assets the retailer has. The board of directors announced it was forming a special committee to consider Lampert's proposal as well as to see if anyone else might be interested in purchasing them.

Considering Sears has been trying to sell most of these assets for the better part of two years without any luck, Lampert is likely to be the high bidder, if not the only bidder. It looks more like a formality to clear a path to selling Lampert the goods and giving him the last remaining vestiges of value before the retailer goes under. 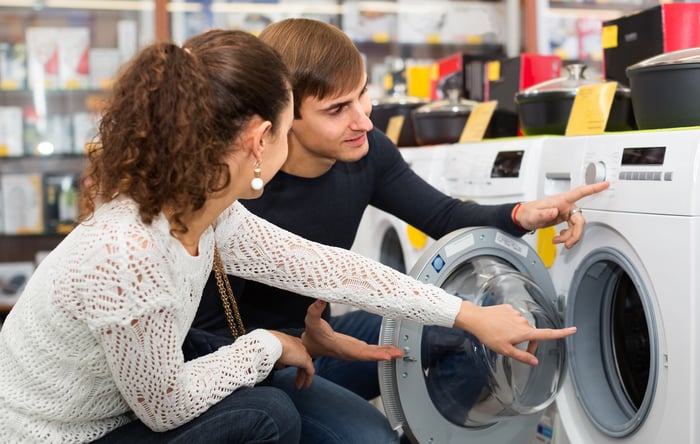 Sears chairman and CEO Lampert will own valuable assets if the retailer finally goes under. Image source: Getty Images.

Before turning out the lights

Last month, on behalf of his ESL Investments hedge fund, Lampert wrote a letter to the Sears board detailing his belief a sale would be in the best interests of Sears: "In our view, pursuing these divestitures now will demonstrate the value of Sears' portfolio of assets, will provide an important source of liquidity to Sears, and could avoid any deterioration in the value of such assets."

Sears has been in a tailspin almost since Lampert joined together Sears and Kmart in online shopping, and tougher competition in the form of Walmart and Target ruined any advantages the old-line retailer possessed.

Annual revenues at Sears have fallen from $53 billion in 2006 to $16.7 billion last year. Much of that is the result of closing down or selling off thousands of stores over the past decade, but also because customers continue to abandon the retailer in droves. Last quarter, comparable-store sales plunged over 18% at Sears and were down 12% at Kmart. Sears has suffered catastrophic losses, too, a cumulative total of $10.8 billion over the past seven years.

He also launched a real estate investment trust, Seritage Growth Properties (SRG -3.17%), to which he sold hundreds of Sears properties, which he then leased out to new tenants at dramatically higher rents. ESL has a large ownership stake in Seritage.

And now he wants ESL to take over ownership of the Kenmore appliance brand, its appliance parts business, the retailer's home improvement business, and some of Sears' real estate holdings. Lampert is willing to pay $500 million for the parts business and the home improvement unit, and though he did not put a price tag on Kenmore or the real estate, he said the hedge fund would assume the $1.2 billion of debt obligations attached to the real estate.

While Lampert maintains he's still "fighting like hell" to turn around Sears and restore it to profitability, the offer to buy these assets looks more like a bid to rescue them from being sold off at fire-sale prices in a bankruptcy proceeding.

Kenmore used to be the premier appliance brand and Sears the top destination to make appliance purchases, but both have long since fallen hard. Kenmore now ranks behind other manufacturers like LG, and Sears is now fourth in appliance sales behind Lowe's, Home Depot, and Best Buy.

To spur sales of Kenmore, Lampert did strike a deal with Amazon.com (AMZN -3.01%) to sell the brand on the site, similar to the arrangement it just announced to have its auto centers serve as the preferred location where tires purchased on Amazon could be installed. But neither has or will likely have an appreciable impact on sales or Sears' future.

What the sale will do is ensure Lampert is able to salvage something of value from the dumpster fire that Sears Holdings has become. Because no one else seems to want these assets, it's almost a given that Lampert will get them, even if it is dressed up with a facade of an arms-length transaction.