Please ensure Javascript is enabled for purposes of website accessibility
Log In Help Join The Motley Fool
Free Article Join Over 1 Million Premium Members And Get More In-Depth Stock Guidance and Research
By Matthew Frankel, CFP® - May 25, 2018 at 6:18AM

These stocks have tremendous growth potential over the next 50 years and beyond.

Billionaire investor Warren Buffett has said that his "favorite holding period is forever." He approaches every investment as if he's going to own it forever and never sell.

While this is certainly a great mindset for long-term investors, the reality is that not all stocks make great "forever stock" candidates. The ideal forever stock is in an industry that's growing and will be around for decades no matter what happens and has a business with identifiable competitive advantages that should protect its market share for the foreseeable future. 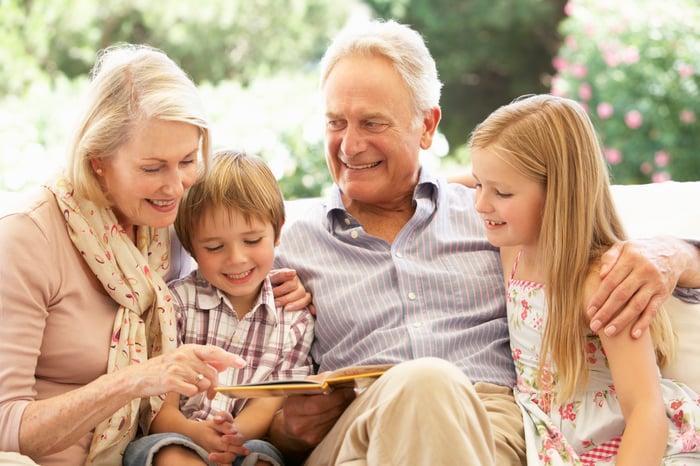 Real estate for the next 100 years

You'll notice that there are no tech stocks on this list, and there's a good reason for it. There's no way to know how computers, tablets, mobile devices, and other connected equipment will evolve over the next century, so it's tough to call any specific tech company a "forever stock."

While we don't know how technology will evolve, we certainly know that it will evolve. That's why I'd rather invest in technology through Digital Realty Trust, a real estate investment trust, or REIT, focused on data center properties. As of the latest information, Digital Realty owns 203 data centers with over 32 million square feet of space that's rented out to more than 2,300 customers, including particularly large tenants such as IBM, Facebook, and Oracle, just to name a few.

Digital Realty has grown tremendously over the past decade or so, and shareholders have been handsomely rewarded. Even so, there's reason to believe that the growth still is in the relatively early stages.

Specifically, the number of connected devices worldwide is expected to explode in the coming years. "Internet of Things" connected devices are growing at a 34% annual rate, and certain types of data-heavy devices, such as autonomous vehicles, are expected to grow even faster. This should translate to a surge in the need for ways to reliably and securely house servers and other networking equipment, which should give Digital Realty a very bright future, no matter what specific gadgets come out on top.

A winning business model, even in the post-Buffett era

While Warren Buffett has advised investors that Berkshire Hathaway won't be able to replicate its stunning performance record in the future (Berkshire is up more than 2,000,000% over the past 54 years), that doesn't mean Berkshire isn't a great forever stock with potential to beat the market. As Buffett has explained, Berkshire has a key competitive advantage when it comes to finding new businesses to acquire -- specifically, companies want Berkshire Hathaway to invest in them.

The reasons he feels this is true is because of Berkshire's excellent reputation, nearly unmatched financial flexibility, and reputation for leaving the business' existing management teams in place to run the operations as they see fit. As Buffett said at a Berkshire Hathaway shareholder meeting years ago:

The key takeaway is that Berkshire's most important competitive advantage these days has little to do with Buffett, so the stock should do just fine after he's no longer running the show. At Berkshire's most recent meeting, Buffett pointed out that he's been "semi-retired" for some time, and Vice Chairman Charlie Munger advised shareholders to keep their Berkshire shares after he and Buffett are gone.

Who knows where this bank's consumer business could go?

There are plenty of reasons to like investment-banking giant Goldman Sachs. Its investment-banking business is the industry leader in several key areas, the investment-banking division has an impressive $1.5 trillion in assets (and growing), and the bank's profitability is well above industry benchmarks, just to name a few. However, there's one potential growth catalyst that could make Goldman Sachs one of the best-performing bank stocks over the coming decades -- the still-in-its-infancy consumer-banking operation.

If you're not familiar, Goldman Sachs ventured into consumer banking in late 2016 through its Marcus lending platform, which has since expanded to offer online savings accounts and certificates of deposit with industry-leading interest rates on its products. The Marcus platform originated $1 billion in loans faster than its competitors did and has already surpassed $3 billion in lending volume.

There's still lots of room to grow. The unsecured consumer-lending market in the U.S. is estimated to be over $1 trillion in size, and this assumes Goldman doesn't branch out into other kinds of lending, such as auto loans, mortgages, and student loans.

Speaking of branching out into other areas of lending, one particularly exciting piece of recent news is that Goldman is gearing up to enter the credit card industry in partnership with Apple to launch an Apple Pay credit card. Details are light at this point, but it's tough to imagine a better co-branding partner to have an immediate impact on Goldman's revenue.

The bottom line is that Goldman's consumer-banking business still is very much in the early innings -- in fact, I'd say it's still the first inning if I had to put a label on it. There's massive potential here, and it could take decades before it's fully realized.