Please ensure Javascript is enabled for purposes of website accessibility
Log In Help Join The Motley Fool
Free Article Join Over 1 Million Premium Members And Get More In-Depth Stock Guidance and Research
By Leo Sun - Updated May 28, 2018 at 5:15PM

Google Home outsold Amazon Echo for the first time in the U.S. during the first quarter.

Amazon (AMZN -0.26%) dominates the U.S. smart speaker market with its Echo devices. Its Alexa-powered devices are expected to control 66.6% of that market this year according to eMarketer's latest estimates, compared to 29.5% for Alphabet's (GOOG 0.19%) (GOOGL 0.33%) Google Home.

By 2020, eMarketer expects Amazon's share to slip to 60.8% as Google's share rises to 32.9%. However, a recent report from Canalys indicates that Google could be catching up at a faster-than-expected pace. 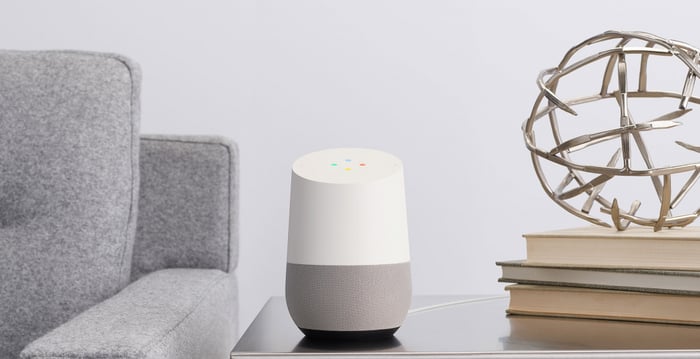 What's at stake for Amazon and Google

Amazon and Google are both using their smart speakers to expand their digital ecosystems into users' homes. Echo and Home both let users control smart home devices, access a growing list of online services like Uber, food deliveries, and streaming music, and answer queries with the help of a virtual assistant.

Amazon's ultimate goal is to tether Echo users to its Prime ecosystem, making them dependent on Alexa when ordering products from its online marketplace. Amazon recently revealed that it had over 100 million Prime members worldwide, and research firm CIRP estimates that the average Echo owner spends an average of $1,700 annually on Amazon, compared to $1,300 for the average Prime member and about $1,000 for all members.

To reach the maximum amount of customers, Amazon launched different Echo versions across multiple price tiers with different features, including the portable Dot and Tap; video screens for the Look, Show, and Spot; and streamlined smart home connectivity for the Echo Plus. It also heavily promoted its Echo devices during Prime Day, Black Friday, and Cyber Monday. 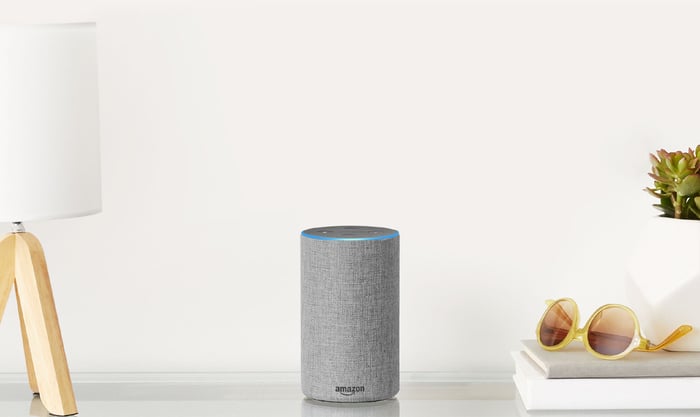 Google constantly trailed behind Amazon in product searches and e-commerce. However, Google Home gives the company a fresh shot at tackling Amazon. A growing list of brick-and-mortar retailers, including Walmart and Target, have integrated their online marketplaces with Google Home, which lets users buy products with Google Assistant.

The expansion of that retail ecosystem could secure Google's position as an all-in-one platform for online services. Its integration of other services -- like Calendar, YouTube, Drive, Photos, Chromecast, and Search -- could then make Home a fundamentally more useful device than Echo.

Why Amazon should watch its back

Google Home's growth spurt comes as Amazon tries to reassure investors and customers that its Prime and Echo ecosystem can keep expanding.

First, Amazon's decision to raise Prime's annual fee from $99 to $119 alienated many customers. Recent surveys by Atherton Research and Yahoo Finance suggest that 59% and 45% of Amazon's Prime customers, respectively, won't renew their memberships after the price hike. Granted, some of those customers probably won't follow through, but this widespread anger at Amazon could leave it vulnerable to Google's growing list of retail allies.

Second, Amazon is dealing with a privacy debacle regarding Alexa after an Oregon woman claimed that her Echo device recorded a private conversation with her husband and sent it to an acquaintance. Amazon claims that the speaker was accidentally woken, then misunderstood the background conversation, believing it contained confirmations to send a message.

That defense is likely valid, but it raises troubling privacy concerns -- especially after Facebook's Cambridge Analytica scandal cast a dark cloud over all data-gathering tech companies. Even if this is a one-off event, the headlines could hurt Echo sales as Google Home gains ground.

The global smart speaker market could grow from $2.7 billion this year to $11.8 billion in 2023, according to Research and Markets, so there's probably plenty of room for Amazon, Google, and other companies to thrive.

Nonetheless, Amazon investors should keep a close eye on Google Home, since it could eventually challenge the growth of its Echo and Prime ecosystems.