You may not think of Alexandria Real Estate, Walt Disney, and Nielsen Holdings as dividend plays, but each company has the potential to be a great stock for income investors.

Dividend investors are always on the hunt for great companies that reward their shareholders handsomely. To track down those companies, sometimes investors need to get off of the well-worn path and take a closer look at dividend plays that aren't the most obvious choices.

Fortunately for you, we asked a few Motley Fool contributors for companies that many investors may not consider dividend stocks, but that have the potential to be great long-term picks. Here's why Alexandria Real Estate (ARE 0.69%), Walt Disney (DIS -2.60%), and Nielsen Holdings (NLSN -0.14%) made this list. 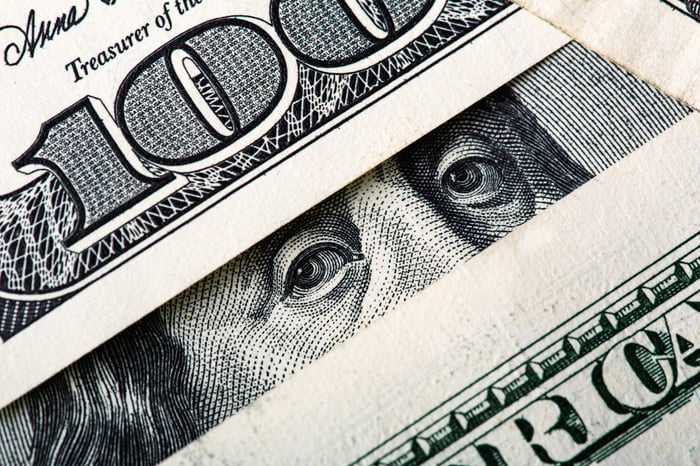 Todd Campbell (Alexandria Real Estate): Only 5% of over 10,000 known diseases have medicines available that can treat them, and that means that there's a lot of opportunity for researchers to investigate and develop new drugs. That's great news for Alexandria Real Estate, because it's been renting specialized lab and office space to biopharma researchers since the 1990s.

A real estate investment trust, Alexandria Real Estate is a Goliath in its niche. The company creates biopharma clusters in research communities including San Diego, San Francisco, Seattle, and Boston, and growing demand for its properties has allowed it to steadily increase rents and build more properties. As a result, its revenue has soared to over $1.1 billion from less than $500 million in 2012.

The company's success has been a boon for income investors. Although REITs only need to pass through 90% of their taxable income to shareholders, Alexandria passes through 100%, and that's resulted in its dividend becoming increasingly bigger. Alexandria's quarterly dividend was $0.90 per share in March 2018, and that was 38% higher than it was in the summer of 2013.

There's good reason to think Alexandria's sales and dividend hikes will continue, too. A growing understanding of the role that genes play in disease has unleashed a torrent of biopharma research and development. Due to that, the company's occupancy rate is nearly 97% despite the addition of new space. Alexandria's leases include 3% annual rent increases and it's got 2.3 million square feet of new space in its pipeline (which is 81% leased), so I suspect investors are going to pocket increasingly more money in the future from dividends.

Captain Dividend to the rescue!

Anders Bylund (Walt Disney): Hold up -- of course I'm not saying that Disney is an unknown stock, company, or brand. It is the business behind Disney World and Disney Land, the name behind Mickey Mouse and Donald Duck, the movie studio that produced six of the 10 most profitable films in Hollywood history, and quite frankly the wind beneath all of our wings.

You don't get any less "unknown" than Walt Disney. But I bet you haven't thought of Disney as a top-notch dividend investment. That's a mistake.

As one of the most efficient cash machines on the planet, Disney has seen its free cash flow surge 63% higher over the last three years. At the same time, a shareholder-friendly dividend policy has returned somewhere between 20% and 30% of those annual cash collections to shareholders in the form of dividend checks.

So why hasn't this constant generosity resulted in sky-high dividend yields, then? Well, the yield equation must also consider Disney's share prices, where a higher stock price results in a lower dividend yield.

In the first few years of the emerging Marvel's Avengers franchise, Disney shares tripled in four years. At the end of that fantastic run, in the spring of 2015, the annual dividend yield had dwindled to a mere 1%.

That's when Disney investors took their eyes off the healthy Marvel, Pixar, and Lucasfilm brands to focus on Disney's struggling TV properties instead. Above all else, sports portal ESPN has struggled to sell ads as more consumers cut the cord and turn to streaming-video services instead.

At this point, Disney is about to release its own ESPN-branded streaming-video service for sporting content. A full-fledged service for movies and TV series will follow in early 2019 as the streaming partnership with Netflix expires. In short, things are looking up and the company hasn't stopped churning out record-breaking silver screen hits.

So Disney's stock stalled in recent years but the payouts kept getting richer. That's how the annual yield climbed back to 1.6%, and I see no end to the dividend boosts. I mean, have you seen Disney's cash flow chart lately? 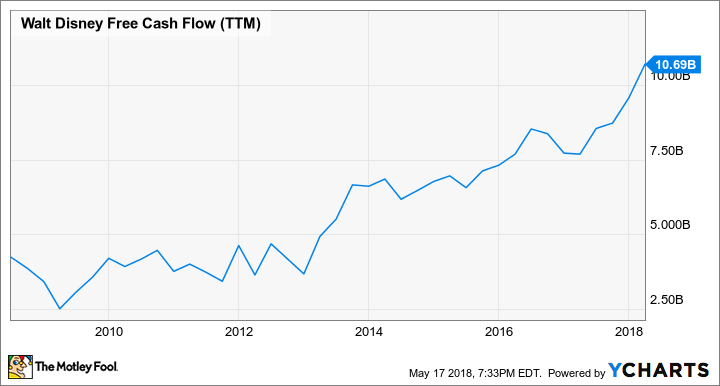 Sure, the yields may stall or even fall again if Disney's share prices pick up the pace again. That's a really nice problem to have, though. Either way, investors should celebrate.

And that's why Walt Disney is the dividend superhero you just never really knew.

A steady dividend play that's all about data

Chris Neiger (Nielsen Holdings): You probably know Nielsen Holdings as the company that provides ratings for television shows -- and it still does that -- but the audience measurement company also gives its clients access to data across radio, online, and mobile platforms as well. Aside from its traditional audience tracking, it also provides essential buying data to consumer goods manufacturers and retailers through its Nielsen Buy services. In world where data drives which products and content are worthwhile and which aren't, Nielsen's services are as relevant as ever.

Total sales for the company increased by 5.5% in the first quarter to $1.6 billion. The modest revenue gains over the past few quarters have led investors to push down the company's share price about 20% over the past year, but that doesn't mean dividend investors should avoid this company.

Nielsen is currently at the beginning of its "Path to 2020" plan that includes cutting back expenses to achieve annualized cost savings of $500 million, as well as a goal to generate double-digit GAAP EPS growth through 2020.

Investors should also take note that the company has boosted its dividend annually for the past four years and its yield is now at a very desirable 4.5%. If that's not tempting enough, consider that Nielsen's shares are trading at just 16 times the company forward earnings right now. With management's growth plan in place and the company's high-yield dividend intact, Nielsen's shares may be just what income investors are looking for.