Please ensure Javascript is enabled for purposes of website accessibility
Log In Help Join The Motley Fool
Free Article Join Over 1 Million Premium Members And Get More In-Depth Stock Guidance and Research
By Billy Duberstein – May 29, 2018 at 8:13AM

At these levels, it’s much easier to nibble on its burgers than the stock.

Shake Shack (SHAK -0.13%) was one of the big winners of the current earnings season, with the stock popping 25% the day after its first quarter earnings release. Revenue increased 31.2% to $96.14 million, beating expectations by $3.27 million, while adjusted earnings per share (accounting for the substantial minority interests of its founders) came in at $0.15, up 50% over the prior year.

However, with the stock now up over $56 per share, and now trading at a lofty 82.5 times forward earnings estimates, is Shake Shack a buy at current levels?

While the market reacted like operating results knocked it out of the park, let's keep things in perspective. Traffic in Q1 declined by 4.2% on a same Shack basis, while overall same-Shack sales increased 1.7% on the back of a 5.9% increase in pricing and some shift in mix. Things would have looked a bit better  (2.1% boost to same-Shack sales, with only a 2.2% traffic decline) if factoring in the free burger promotion in the year-ago quarter, but that still means declining traffic. 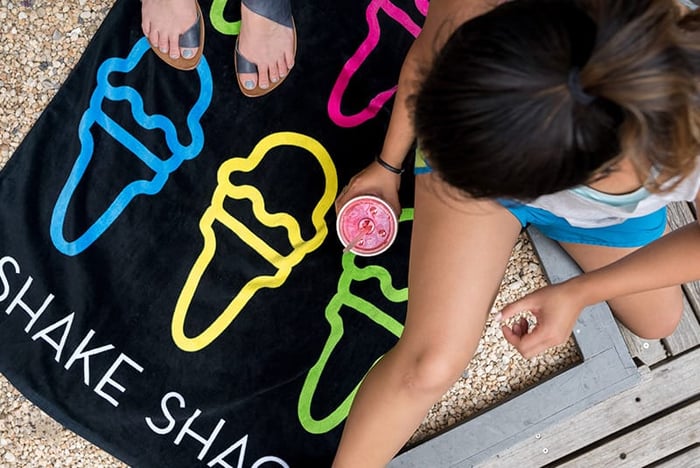 While seemingly underwhelming, these figures were a big improvement over the 2.5% same-Shack-sales decline last year. Management also raised 2018 same-shack sales guidance to 0% to 1%, up from the previous forecast of 0%, and upped revenue guidance to $446 million to $450 million, up from a previous guided range of $444 million to $448 million, and Wall Street clearly liked this relative outperformance.

Not all same-Shack sales are the same

Though traffic declines are concerning, Shake Shack does deserve a break on same-Shack sales from investors... within reason. The company first launched in extremely high-traffic, high-cost areas in New York City and the eastern corridor from Boston down to Washington D.C., and was immediately a hit product. So while these markets may in fact be more saturated, Shake Shack's growth story is really one of unit growth in new markets over the next few years.

But while the company is planning to double its restaurant count by 2020, one shouldn't necessarily expect a doubling of sales, as new markets will not come anywhere close to the average unit sales or profitability of its base big-city restaurants.

Now for the real bad news. To achieve that growth, Shake Shack is rapidly increasing its corporate overhead -- even faster than sales and restaurant profits are increasing. General and administrative expenses were 11.9% of revenue last quarter, up from just 11% in the year-ago quarter. These, as well as increased labor and marketing costs, caused operating profit margins to fall from 7.3% to 6.6%, even as gross profit on food rose. Management claims these costs will eventually drive operating leverage as the company grows, and that the company is taking further steps to drive efficiency.

Another cost that is rising is technology, as Shake Shack is pursuing a number of initiatives to streamline its processes and increase customer satisfaction. CEO Randy Garutti explained that the company is "heavily investing in" a combination of the Shake Shack app, delivery integration with that app and outside partners, and launching in-store kiosks where customers can order instead of waiting on Shake Shack's characteristically huge lines. Labor costs are on the rise across the industry, so if technology can help mitigate the need for extra hands to take orders, that would be a big benefit.

All of these initiaitves are in the experimental stage though, as management is still figuring out the right features for Shake Shack's operating model. Tech initiatives such as these are also not easy wins; when Starbucks rolled out mobile order-and-pay to its customers, the deluge of customers  initially overwhelmed the staff, and the company actually had to increase labor at peak hours.

Trading at 82.5 times next year's earnings estimates, I am not a buyer of Shake Shack at these levels. While Shake Shack's pricing power signals good brand strength, it's unclear how much more it can do that while keeping traffic at reasonable levels. In addition, the combination of increasing infrastructure costs and lower-revenue markets makes future profitability too uncertain. Don't get me wrong, I love my Shake Shack burgers, but won't pay up for the stock here.