Please ensure Javascript is enabled for purposes of website accessibility
Log In Help Join The Motley Fool
Free Article Join Over 1 Million Premium Members And Get More In-Depth Stock Guidance and Research
By Cory Renauer - May 29, 2018 at 8:18AM

The Cologuard test is gaining popularity. Can it deliver profits?

Exact Sciences Corporation (EXAS 2.95%) became one of the best-performing stocks of 2017. A successful marketing blitz helped test volumes soar, and they're still climbing. Now that Cologuard's launch trajectory appears to be tapering off, though, the shares have been bouncing around as nervous investors begin to worry the company might never turn a profit.

What will 2023 look like for Exact Sciences? Instead of using a crystal ball to divine the future, we can look at a couple potential scenarios that could allow the stock to climb again or continue sliding. 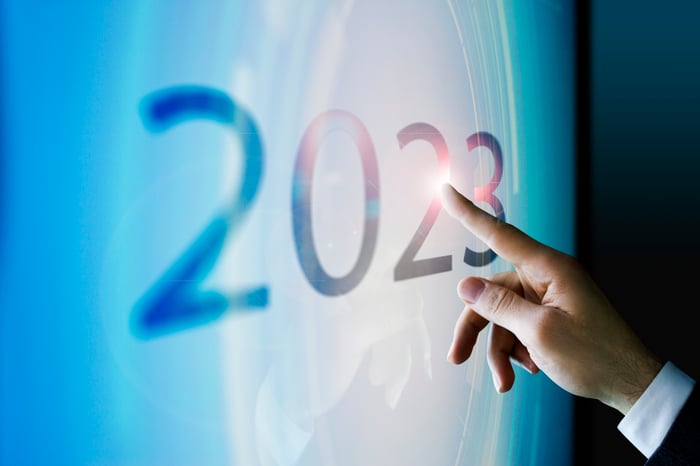 Exact Sciences Corporation bulls have some big numbers on their side. If 40% of the eligible U.S. population used its home screening kit every few years, the company could haul in around $5.4 billion annually. This is assuming Exact continues recognizing $485 per test in top-line revenue as it did during the first few months of 2018.

If Exact Sciences can keep expenses in check and squeeze out an optimistic 20% profit margin, hitting its lofty 40% market share goal would work out to bottom-line earnings of around $9 per share for a stock that currently trades at around $53. If the company simply approaches approach its goal within the next five years, patient investors would be richly rewarded.

It's way too early to start popping champagne corks, but Cologuard's launch has progressed better than anyone could have hoped for. During the first three months of the year, an effective sales force added 9,000 healthcare providers to a list of clients that reached 110,000 at the end of March.

According to a survey conducted late last year, the service met or exceeded 99% of provider's expectations. I'll admit, the percentage of patients that "deposit" and ship their samples is much higher than I expected when I first heard of the self-administered colorectal cancer exam. At the end of the first quarter, 68% of patients were returning their kits within six months.

This stock's bears are quick to point out that the company's spending an awful lot of money to get the word out about its Cologuard test. Exact's marketing blitz has been successful but at a tremendous cost. 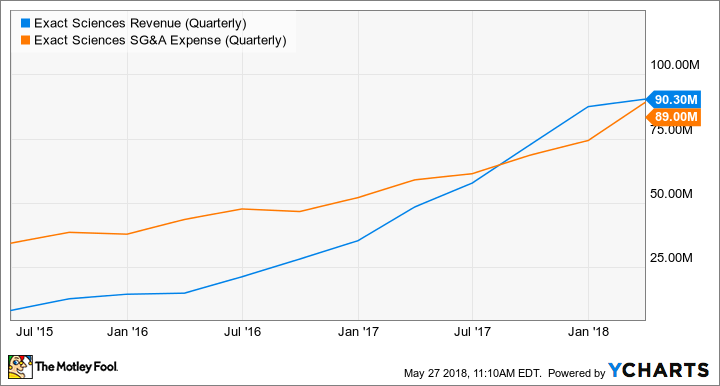 It isn't unusual for sales, general, and administrative expenses to exceed revenue during the initial launch of a company's first product. Cologuard's been available since 2014 and despite achieving significant test volumes, it still doesn't generate nearly enough revenue to cover Exact's operating expenses. Tack on the research and development necessary to stay ahead of the curve, and operations lost $119 million over the past 12 months.

It doesn't look like getting the word out about a cancer screening is getting any cheaper, but the test itself is. The Centers for Medicare and Medicaid services set the reimbursement rate for Cologuard at $508.87 for a three-year period beginning this January, which was a few dollars less than its previous rate.

Cologuard's reimbursement rate isn't arbitrary, and investors could lose a lot of money between now and 2023 if it falls dramatically. The CMS adjust the rate according to the volume-weighted median of private payer rates and will make another adjustment based on prevailing prices during the first half of 2019.

When it comes to healthcare, governments generally shell out less than private payers. Exact Sciences doesn't break down how much private payers cough up for Cologuard, but the company reported an average of $485 per test during the first quarter.

An overall average significantly lower than the CMS reimbursement rate suggests Exact Sciences is offering deep discounts to snag patients that aren't old enough for Medicare, and it probably wouldn't be the first time. A couple years ago, Exact Sciences filed a lawsuit claiming it was never paid after billing Humana more than $800,000 for at least 4,664 tests, which works out to perhaps $172 per test.

If Exact Sciences Corporation's experience with Humana wasn't an isolated one, and recognized revenue from each test continues falling, this company's bottom line could still be deep in negative territory five years from now.

Why I'm leaning toward a negative scenario

For what it's worth, I think the Cologuard test is worth every penny. That said, investors need to realize that Americans tend to switch insurers too quickly for them to realize all the long-term financial benefits that cancer diagnostics can provide.

Until Exact Sciences begins breaking down exactly how much it earns from tests that aren't reimbursed by Medicare, we have to assume the figure isn't flattering. That doesn't bode well for Cologuard's pricing down the line or the company's odds of earning a profit in the years ahead.