Please ensure Javascript is enabled for purposes of website accessibility
Log In Help Join The Motley Fool
Free Article Join Over 1 Million Premium Members And Get More In-Depth Stock Guidance and Research
By Joe Tenebruso - May 29, 2018 at 9:31AM

Management expects sales and profits to be harder to come by in the year ahead.

Zoe's Kitchen (ZOES) reported first-quarter results on May 24. The fast-casual restaurant chain is struggling with declining traffic and shrinking margins, prompting it to cut its financial outlook for 2018.

Total revenue rose 12.7% year over year to $102.1 million, driven by new store openings. Zoe's Kitchen opened 11 new company-owned restaurants in the first quarter and a total of 40 restaurants over the past year, bringing its store count to 251 locations at the end of the first quarter.

However, comparable-restaurant sales fell 2.3%, as a 2.1% increase in price only partially offset a 4.4% decrease in transactions and product mix.

"In select markets where we had the first mover advantage, competitive restaurant square footage growth is having an impact on our sales and transaction trends," CEO Kevin Miles said during a conference call with analysts. "We also believe that disruption from delivery and discounting has created headwinds." 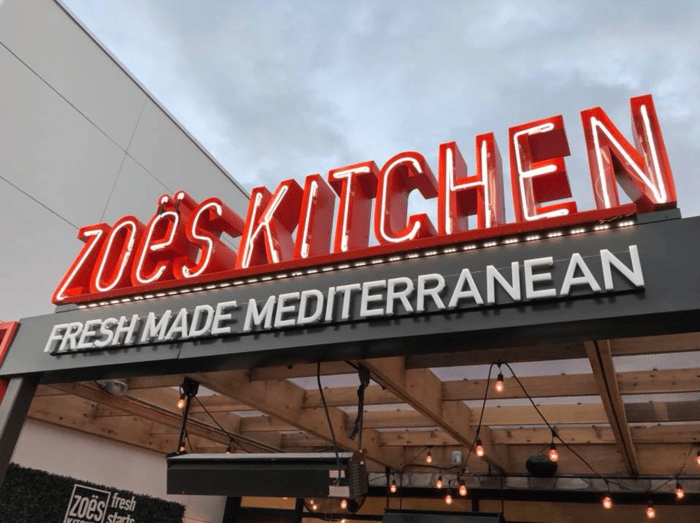 Zoe's Kitchen maintained its full-year store openings target at approximately 25 company-owned restaurants. Yet the company said it would reduce its pace of expansion in 2019 to about 10 store openings.

Management also said that it might look to close five to 10 lower-performing stores. "While we are still early in this evaluation process, we have identified a handful of older restaurants approaching the end of their lease term that we may prefer to close when the lease expires and other locations that we may decide to close prior to the end of the lease term," Miles said.

Management believes these actions -- combined with cost cuts and increased marketing investments -- will help place the company back on track.

"We are fully committed to reversing our traffic trends and our team is laser-focused on operational execution and sales driving initiatives," Miles said. "We believe the steps we are taking are right for the long-term health of the brand and to maximize shareholder value."