The Walt Disney Company (NYSE:DIS) still enjoys a position at the top of the entertainment industry, but its share price has sagged in recent years as a result of uncertainty surrounding key aspects of the business. Reviewing how the House of Mouse is making its money should help put the big challenges and opportunities shaping the company's stock performance in perspective.

The small screen is bigger

With franchises like the Marvel Cinematic Universe and Star Wars drumming up excitement at movie theaters and being featured on everything from pajamas to cereal boxes, a person could easily get the impression that movies are Disney's main moneymaker. Blockbuster films do play an important role, but the company's biggest cash cow is actually its television business. That characteristic helps to explain why Disney's share price has declined roughly 10% over the last three years, while the S&P 500 index has climbed 28%. 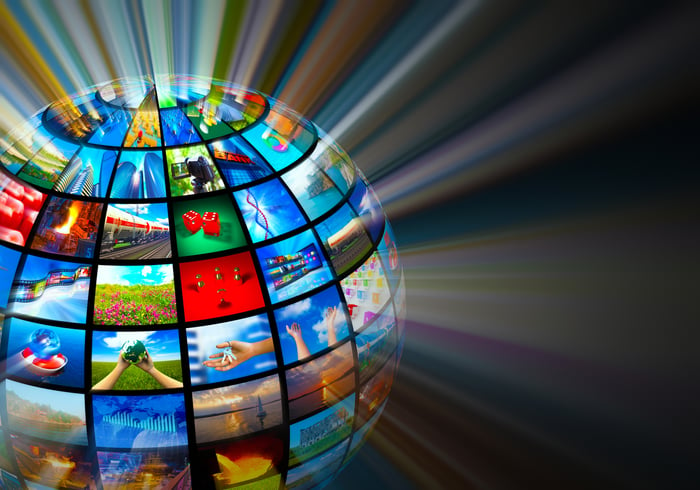 Let's start with an overview of the company's sales profile. The table below outlines Disney's revenue contributions by segment in its most recently reported quarter:

The company's television segment accounted for roughly 42% of sales and 49% of operating income in the March-ended quarter -- contributions that are within normal bounds for the business. For a broader look, the chart below shows Disney's revenue and operating income contributions by segment over the trailing-12-month period: 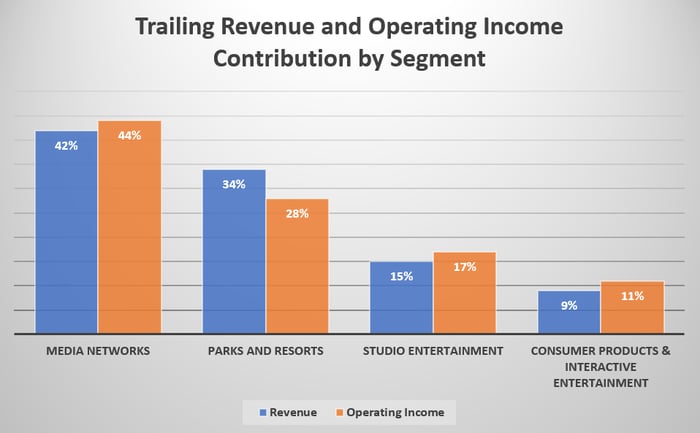 The core of Disney's television business

The company's cable business generates sales from ads as well, but the bulk of its revenue comes from fees paid by cable companies like Comcast and Charter Communications in exchange for the rights to carry networks like ESPN, ESPN2, and The Disney Channel. The main ESPN channel is Disney's biggest sales driver and likely accounted for around half of the $23.7 billion in sales that the media networks segment recorded over the past year.

For each of the 87.5 million U.S. households that receive ESPN through cable or satellite, Disney receives a monthly payment of $8.14. That rate is far above what other channels are able to command -- a distinction that stems from ESPN's strong ratings and importance to the standard cable package. This advantage has been a key factor in Disney's fantastic performance over the last two decades, but reliance on the marquee sports channel and broader media networks segment represents a fault line for the company as the entire television industry faces challenges.

Cable companies have traditionally bundled a large selection of channels together, but the rise of digital distribution is making it easier for viewers to get their desired content without buying a full-service package. Right now, there are households that pay for ESPN and other Disney networks even though they do not watch them, and consumers are understandably migrating to service packages that better fit their needs. That's putting pressure on Disney's core cable networks and has been a big factor in ESPN losing roughly 12.5 million subscribers since 2011.

Segment dynamics and what lies ahead

Disney has been able to hike its carrier fees and advertising rates, but rising content costs continue to tamp down profitability in TV land. The table below shows year-over-year change for sales and operating income of Disney's business segments across the last two quarters.

Operating income for the the media networks segment is seeing a substantial decline even as sales inch up, and, based on current conditions, it looks like the company's television branch will continue to experience profit erosion. That's not necessarily a death sentence for Disney stock, however.

While cord-cutting and the high cost of securing sports content have put pressure on the television business, other parts of Disney have picked up the slack -- especially the company's theme parks segment. Promising results from international expansion efforts have helped push theme parks forward and pricing increases at domestic locations are aiding in big sales and profit gains.

The company's movie business accounts for a smaller share of sales, but it's posting strong performance as well and plays a much bigger role than the raw numbers might imply. When a movie like Frozen or Avengers: Infinity War hits it big at the box office, synergistic effects are created with Disney's other business segments. Successful movie properties become long-term draws at the company's theme parks, inspiration for toys, clothing lines, and other merchandise, and they also add to the library of content that can be used for the company's television networks and its upcoming streaming platforms.

In response to changing viewer habits, Disney is moving away from featuring its content on Netflix and other third-party platforms by launching its own streaming services, including one that will leverage its extensive library of well-loved franchises and family-friendly content. The multimedia giant also recently launched ESPN+, a streaming service that carries a $4.99 monthly subscription fee and primarily offers content that's not being broadcast on core ESPN channels. This move should help the company make use of licensed sports content that would otherwise go unused and provide feedback as it becomes a player in the streaming ecosystem. Disney also owns a 30% stake in Hulu.

Turning to consumer products: This division contributes the lowest share of overall sales and operating income, but it also produces better margins than any of Disney's other businesses. Most of the segment's sales come from licensing the rights to make products featuring its characters to companies like Hasbro and Electronic Arts, and this highly profitable business likely still has substantial room for growth.

With all this in mind, Disney's other segments are looking strong and, with its foray into streaming, it's not as if the company is standing still as its media networks empire slowly slips away.

The media networks segment will continue to be the House of Mouse's biggest sales and earnings generator in the near future. That means that investors should pay close attention to shifts in the cable industry and Disney's efforts to meet these rising challenges, but it's worth keeping in mind that the company appears to be strengthening other areas of its business.