The beer industry keeps shrinking. Drinkers haven't been bellying up to the bar for years, and last year sales volumes were down another 1.2%.

But while megabrewers like Anheuser-Busch InBev (NYSE:BUD) and Molson Coors (NYSE:TAP) continue to see overall sales shrink, craft beer at least can say its business is still growing. While the heady double-digit growth rates of the past decade are probably a thing of the past, sales volumes still rose 5% in 2017 for craft brewers, and small and independent brewers account for nearly 13% of the total market by volume, according to a report in The Washington Post.

That's cold comfort for Boston Beer (NYSE:SAM), the second-biggest craft brewer and arguably still the face of the craft beer industry. Even as it reports growth in sales of its hard cider, tea, and seltzer, its flagship Samuel Adams brand hasn't posted a single quarter of higher depletions in over three years. (Depletions are an industry benchmark for consumer demand that measures sales to distributors and retailers.)

Unfortunately, it doesn't look like things are going to get any better for beer overall this year, and craft beer's fortunes may soon take a turn for the worse, too. 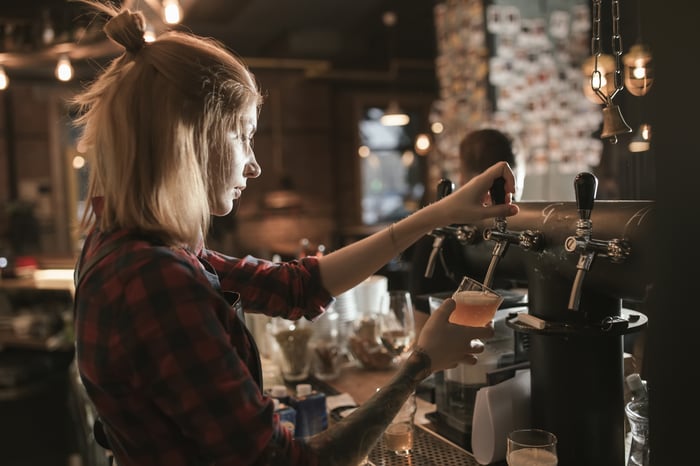 A recent series of tweets from the chief economist of the Beer Institute brewing trade association, Michael Ulrich, suggests how trends are working against the industry.

While beer is still the alcoholic beverage of choice in the U.S., at 49.7% of servings versus 15.4% for wine and 34.9% for hard liquor, it is the lowest share of servings it has ever commanded, according to the Beer Institute's 2017 state of beer presentation. More worrisome is that the only beer segment that actually did better in 2017 than the year before was the "economy" segment, and that was only because brewers engaged in discounting and rolling out larger pack sizes.

The 15-pack case is increasingly becoming a favored size for craft brewers, and though still small at the moment, it has the potential to one day replace the 12-pack as the industry standard. But with the larger size comes a lower price per unit, which could serve to lower brewer revenue and pressure profits.

Boston Beer founder and Chairman Jim Koch said last year on a conference call with analysts that he didn't think there would be a price war among craft brewers given their limited ability to absorb price cuts. "... I think the primary downward pressure on pricing at this point is the advent of 15 packs into craft beer ... And the consumer may or may not look at that as price degradation because they may be looking at the cans and thinking, well, that's kind of equivalent to a 12-pack bottles except I'm getting three free beers."

Even the megabrewers are getting in on it, with MillerCoors transitioning all of its economy brands to the new size, but also moving its Blue Moon brand to it as well. Anheuser-Busch says it will utilize 15-packs as well as 18-pack cases, which of course, with its greater financial resources, allows it to push prices even lower.

Tapping into the new trend

Ulrich tweeted that even though U.S. consumer spending on beer grew 0.7% last year, it was much lower than in recent years and shows resistance to the price hikes brewers -- including Boston Beer -- made in the first quarter. A bigger problem for craft beer may be where its growth is coming from.

The Brewers Association trade group for "small and independent craft brewers" notes there were more than 6,370 breweries operating last year, almost all of them craft, up 16% from the 2016 number. Ulrich noted that taprooms and brewpubs -- on-premises locations where breweries sell their beer -- and other direct sales counted for all the growth in volume that the craft industry experienced last year.

There are now over 2,250 brewpubs in business, according to the Brewers Association, almost double the number that existed just five years ago. Although that could be a healthy sign for the industry, and even Boston Beer is opening up a series of taprooms, it could very well be that as occurred with the explosion of craft beer labels on store shelves, too many brewpubs will mean everyone's glass ends up less full.

Ultimately, Ulrich sees 2018 being another down year for the beer industry, and it's easy to extrapolate the troubles the megabrewers are facing to the craft beer industry itself. Production continues to expand, but the beer market is in decline, and it may find that not nearly enough people will be bellying up to the bar.