Market caps don't mean a thing when evaluating future prospects for biotechs, though. Which of these stocks is the better pick for investors with a long-term perspective? Here's how Bellicum Pharmaceuticals and Alnylam Pharmaceuticals compare. 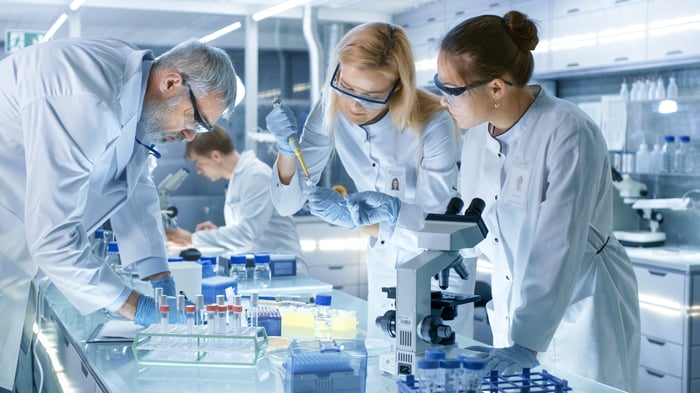 At the moment, there's one overriding reason why investors might want to consider buying Bellicum stock: the biotech's lead candidate, BPX-501. The drug is in phase 3 clinical studies in both the U.S. and Europe targeting treatment of blood disorders.

Bellicum is farther along in Europe. The company expects to report top-line data from its BP-004 study of BPX-501 in treating malignant and nonmalignant pediatric patients undergoing haploidentical hematopoietic stem cell transplant (haplo-HSCT) by the end of 2018. If those results are positive, Bellicum plans to file for European approval next year.

The biotech ran into a roadblock in the U.S. in January when the Food and Drug Administration placed a clinical hold on studies involving BPX-501. This clinical hold resulted from three cases of encephalopathy (a broad term including various types of abnormal brain function) in patients taking the drug. The good news, though, is that this clinical hold was lifted in April after Bellicum agreed to implement an amended study protocol that monitors patients for potential adverse neurological events.

There's certainly a solid market opportunity for BPX-501 if it's successful in the registrational studies. Patients undergoing haplo-HSCT can develop infections and a very serious condition called graft-versus-host-disease (GvHD), where stem cells from a donor attack the patient's cells. BPX-501 addresses these risks through genetically modified T cells that fight blood disorders but shut down if GvHD or other issues crop up.

Bellicum also has other pipeline candidates that aren't as far along in development. Chimeric antigen receptor T cell (CAR-T) therapy BPX-601 and T cell receptor (TCR) therapy BPX-701 are now in phase 1 clinical testing. In addition, the company is working with an academic collaborator on evaluating an experimental CD19 CAR-T drug in a phase 1 clinical study.

The case for Alnylam

Investors have at least five reasons to like Alnylam, all of them late-stage pipeline candidates. The biotech's lead product is patisiran, which targets treatment of hereditary ATTR amyloidosis -- a rare genetic disease where amyloid deposits made of transthyretin (TTR) cause a wide range of debilitating symptoms. Alnylam hopes to win FDA approval for the drug by August 2018.

Assuming patisiran wins approval, Alnylam might have another product on the market not long afterwards. The biotech expects to submit givosiran for FDA approval as a treatment for acute hepatic porphyrias, a rare liver disease, by late 2018.

Another drug for which Alnylam owns full rights could also be on its way to success. The biotech intends to advance lumasiran to a phase 3 study soon. This study will evaluate the drug in treating rare genetic disease primary hyperoxaluria type 1 (PH1). If all goes well, Alnylam could potentially file for regulatory approval in the first half of 2020.

In addition to these three drugs, Alnylam is partnering with other biopharmaceutical companies on two other candidates. Sanofi is evaluating fitusiran in late-stage studies as a potential treatment for hemophilia A and B. The Medicines Company is conducting phase 3 studies of inclisiran, an Alnylam-developed drug targeting treatment of high cholesterol levels.

Alnylam has more shots at goal with five late-stage pipeline candidates compared to only one for Bellicum. I think this is the key reason why Alnylam is the better stock at this point.

Another factor is the two biotechs' cash stockpiles. Alnylam reported cash, cash equivalents and fixed income marketable securities, and restricted investments of $1.6 billion at the end of March. That should be an ample amount to fund operations until product sales start flowing in -- assuming patisiran wins approval, of course.

Bellicum, on the other hand, only had around $82 million in cash, cash equivalents, and short-term investments as of March 31, 2018. The company subsequently raised another $69 million (before underwriting discounts, commissions, and other expenses) in April. While that should be enough to carry Bellicum through the end of 2019, Alnylam is in better financial shape.

Although my take is that Alnylam is the better stock to buy, the biotech definitely faces some risks. There's always a possibility that it could experience pipeline setbacks. Patisiran will also likely face competition from Ionis Pharmaceuticals' inotersen and Pfizer's tafamidis, for which positive phase 3 results were reported in late March.

Alnylam might be akin to Goliath if Bellicum played the role of David, but in this battle, my bet would be on the giant. However, giants aren't known to be fast movers. I think Alnylam stock will perform relatively well in 2018, but don't count on huge gains.