Shares of Ascena Retail Group Inc. (OTC:ASNA) were flying higher last month even though there was little news about the diversified apparel retailer. Instead, investors seemed to pile into the stock due to bullish earnings reports from peers like Macy's (NYSE:M) and Kohl's -- and to take advantage of the stock's bargain price after it had fallen so sharply in recent years.

According to data from S&P Global Market Intelligence, the stock finished May up 47%. As you can see from the chart below, the stock rose sharply through the second week of the month, seemingly in anticipation of earnings season. 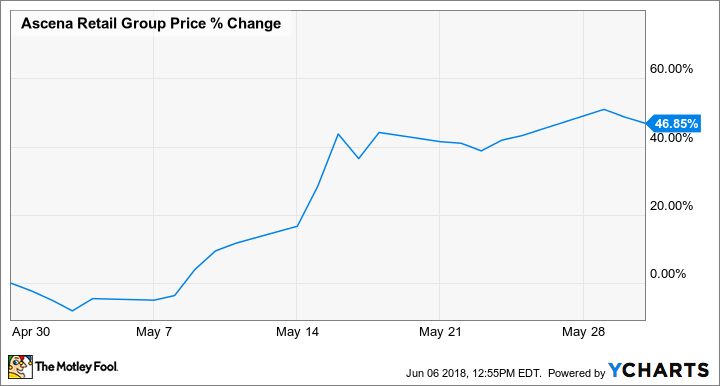 The best day of the month for the parent of brands like Ann Taylor, Dressbarn, and Lane Bryant was May 16, when the stock rose 12% following a 10% jump the day before. Macy's first-quarter earnings report also came out on May 16, and the department store chain, a close competitor of many of Ascena's brands, rose 11% on strong results. Macy's said comparable sales were up 4.2% on an owned-plus-licensed basis, though without the shift in its annual Friends and Family sale, that figure would have only been 1.7%. 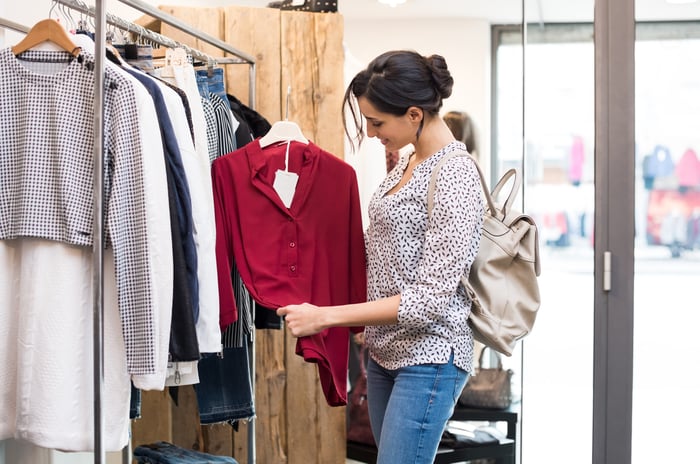 Still, investors applauded the overall numbers, as adjusted earnings per share (excluding asset sales) surged from $0.12 to $0.42. Macy's also raised its adjusted EPS guidance for the year to a range of $3.75 to $3.95 and sees comparable-store sales rising 1% to 2%.

The relationship between Macy's and Ascena may be tenuous, as Macy's momentum had been building for a some time and Ascena has been spiraling. But shares of Ascena had perhaps gotten too cheap to ignore. Even after last month's gains, on a price-to-sales basis, Ascena now trades at a valuation of just 0.12, compared to Macy's at 0.49. Ascena is not profitable, while Macy's is.

In early June, Ascena stock moved higher again as the company posted third-quarter earnings that were better than expected. The stock whipsawed on June 5 after the earnings report came out, falling as much as 14% in morning trading before closing up 8%. Results weren't great, with an adjusted loss of $0.08, down from a profit of $0.05 the year before, but that beat estimates by a penny.  Overall comparable-store sales were down 3%, falling at every brand except Justice, its kids' fashion chain, where they rose 10%. However, the company sees comparable sales ranging from flat to a 2% rise in the current quarter, and expects break-even adjusted EPS.

At this point, last month's rally looks like an anomaly, but considering its valuation, Ascena stock has potential if management can deliver consistent growth and profits.