You might assume that Alphabet Inc. (NASDAQ:GOOG), one of the largest internet companies in the world, with dominant positions in search and advertising, gets more productivity out of its employees than most companies. However, Royal Gold Inc. (NASDAQ:RGLD), a gold streaming and royalty company, produces 14 times more revenue per employee than does Alphabet. That might sound shocking, but it's true -- Royal Gold trounces Alphabet when it comes to this metric of productivity. But what does that really mean?

What revenue per employee tells you

In a recent company presentation, Royal Gold highlighted the statistic "revenue per employee." It's a little bit obscure, but relatively simple to calculate. You just take a company's revenue and divide that figure by the number of employees. Clearly, every employee at a company doesn't generate revenue, but it's a rough estimate of how efficient a company is at using its employees. The higher the number, the better. 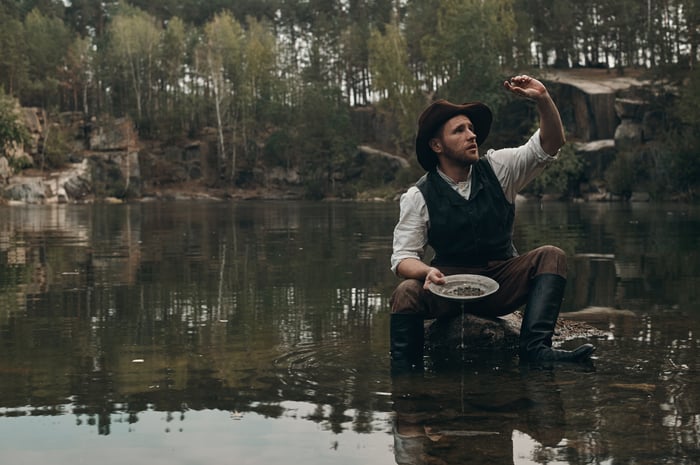 If this guy worked at Royal Gold, he would have to be a lot more productive. Image source: Getty Images

And on the whole, Royal Gold is very, very efficient. Each of the streaming company's employees generates $19 million in revenue. According to the company, that bests 497 of the companies in the S&P 500 Index. Including Alphabet, which generates only around $1.3 million per employee. It also beats Apple Inc., which generates around $2 million per head.

How does Royal Gold achieve such incredible success? It had only 23 employees in 2017 (and revenues of nearly $441 million). For reference, Alphabet has over 80,000 employees. With such a small divisor, Royal Gold has a clear edge in the revenue-per-employee calculation. Even Alphabet's nearly $111 billion in revenue in 2017 can't make up for the disparity in employee headcount.

So is Royal Gold a better company than Alphabet? Not exactly. Notice how close Apple and Alphabet are on the revenue-per-employee metric. This is a far more relevant comparison because the business models of these two technology giants are far more similar to each other than either is to Royal Gold's. Which is why you need to consider the business models here.

How does Royal Gold do it?

Alphabet is a technology company with lots of employees running servers, writing code, conducting research, and doing a myriad of other things. Without getting too far into the business model, the company requires a lot of employees to keep it running smoothly. Royal Gold is a gold streaming and royalty company. It basically provides cash up front to miners for the right to buy gold and silver at reduced rates in the future. 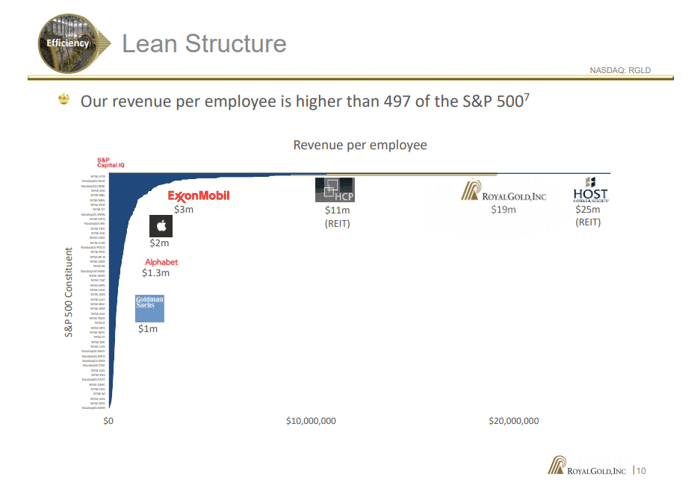 Royal Gold's revenue per employee put up against some of the world's largest companies. Image source: Royal Gold Inc.

It's really something of a specialty finance company that owns a portfolio of mine investments. Of the 192 investments in Royal Gold's portfolio, only 39 are operating mines. There are 22 mines in some stage of development, with the rest in pre-development stages.

But here's the key: Royal Gold's team of 23 employees evaluates each mining project before investing, and then sits back and lets the mining company do all the rest of the work. Royal Gold doesn't get involved in the day-to-day operation of mines, which is very labor-intensive.

Avoiding all the costs of running a mine is one factor that allows Royal Gold to achieve strong margins in both good years and bad (another is contractually locked-in low prices for gold and silver). But it should be pretty clear that comparing Royal Gold in revenue per employee to a company like Alphabet isn't an apples-to-apples comparison -- even if it makes a good headline.

The more appropriate comparison for Royal Gold would be to streaming and royalty peers Wheaton Precious Metals Corp. (NYSE: WPM) and Franco-Nevada Corporation (TSX:FNV). The chart below lays out the vital stats for these comparisons.

*Franco-Nevada has seven part-time contractors which I estimated at 0.5 employees each for this analysis. Data source: Company filings

Looking at Royal Gold compared to its peers isn't nearly as flattering as comparing it to companies with more labor-intensive businesses. But that's not the only issue here. Revenue at Royal Gold, Wheaton, and Franco-Nevada is tied to highly volatile commodity prices. So when gold prices are relatively high, Royal Gold's revenue per employee will be high. But if gold prices were to tumble, the metric would look worse. Alphabet, which is really something of a service provider with advertising sales making up a huge portion of its revenue, is likely to have a far more consistent top line.

Interesting, but not enlightening

At the end of the day, looking at revenue per employee can be a useful gauge of a company's efficiency, but only if you compare similar companies. It's a fun statistic that Royal Gold generated over 14 times more revenue per employee than Alphabet in 2017, but it isn't really useful from an investment standpoint.

Far more telling is comparing Royal Gold to Wheaton and Franco-Nevada, which both appear to be making better use of their employees when it comes to revenue generation. That doesn't mean Royal Gold is a bad investment, only that you need to take its revenue-per-employee bragging with a grain of salt.

This Gold Company Is Beating Alphabet on This Metric, but Does It Matter? @themotleyfool #stocks $RGLD $FNV $GOOG Next Article
Current