Shares of Adobe Systems (NASDAQ:ADBE) rose 12.5% in May, according to data from S&P Global Market Intelligence. The catalyst for the move was the company's $1.68 billion deal to buy Magento Commerce, a leading e-commerce platform.

Adobe prides itself in being the "the leader in designing and delivering digital experiences through content and data." According to Executive Vice President of Digital Experience Brad Rencher in the press release, Adobe is "the only company with leadership in content creation, marketing, advertising, analytics and now commerce" thanks to the acquisition. 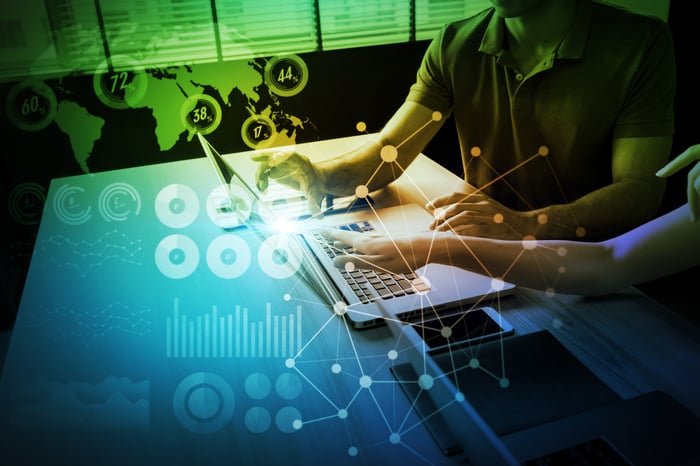 Magento rival Shopify is currently unprofitable, yet its shares cost 12.4 times its forward sales. Given this level of optimism over the industry, the market was always likely to approve of the Adobe/Magento deal, particularly as it's complementary to Adobe's digital strategy.

For obvious reasons the acquisition will be seen as putting pressure on Shopify, but it's worth noting that its stock also generated a double-digit return in May. The extra muscle of Adobe behind Magento may raise the profile of the industry. Shopify and Magento both sell primarily to small and medium-sized businesses and raising awareness of their services to a large number of potential customers could be a net positive for both companies.

Adobe is a company that has engineered a shift toward digital marketing services and more subscription-based revenue. One of the key advantages of this is that it can effectively market its solutions to a loyal subscriber base, and it can also buy businesses in order to add new solutions.

In fact, Adobe has been very active in buying digital businesses in recent years. The Magento deal follow its purchase of Neolane (cross-channel campaign management technology) for $600 million in 2013, Fotolia (marketplace for royalty free images, graphics and video) for $800 million in 2015, and the acquisition of TubeMogul (video advertising) for $540 million in 2017.

In other words, not only does the Magento deal make a good strategic sense for Adobe, it also fits perfectly into the company's business model, too. The deal is expected to close in Adobe's third quarter of 2018.

Why Adobe Systems Stock Jumped 12.5% in May @themotleyfool #stocks $ADBE Next Article
Current