Fresh off of its initial public offering (IPO), this company may be one of the very best fintechs in existence. GreenSky (NASDAQ:GSKY) makes its money by offering a point-of-sale solution to connect consumer borrowers with regional banks.

Its fee-based model relieves it of many of the growth constraints in traditional banking, and the company could see double-digit growth for years (if not decades) to come. Last year, the company quietly drove nearly $3.8 billion of loan volume to its banking partners, growing more than 30% from 2016.

GreenSky acts as a middleman that connects consumer borrowers with banks, collecting a hefty fee in the process. It relies on merchants (primarily home improvement and medical professionals) to bring in loan volume by pitching financing at the point of sale.

Consider this scenario: A homeowner wants to install new windows on a particularly drafty side of her home, but she doesn't have $6,000 of accessible cash to pay for the project outright. The contractor proposes that she apply for a loan through GreenSky, which can offer a 12-month, no-interest financing deal to break the purchase into bite-sized payments.

On the spot, the contractor scans the homeowner's ID card on a mobile phone or tablet, which provides most of the necessary information for the credit application. The homeowner then enters her Social Security number, annual income, and verifies other information before tapping to submit her application.

Behind the scenes, the data is sent to GreenSky, which looks to match prospective borrowers with one of its bank partners based on their preset underwriting criteria. Since the application was a good fit for one of its lenders, it can approve her for a credit limit of up to $8,000 instantaneously.

The contractor tells his future client she's approved for up to $8,000, more than enough to finance the $6,000 project, and now has an opportunity to upsell additional work the client may have otherwise deferred if not for a big credit approval. The homeowner decides to give the green light to the contractor, knowing she'll have months to pay off the balance without paying interest.

One can think of GreenSky as something similar to an offline version of LendingTree. Rather than lend its own money, it merely provides the technology to connect borrowers with lenders.

Its investors have big hopes for what it can become. Nigel Morris, Capital One Financial co-founder and the first institutional investor to buy into GreenSky, told American Banker that the company is "one of those truly magical win-win-win companies," referring to the fact that merchants, consumers, and banks all stand to benefit from its existence.

Morris may be talking his book, but he's certainly credible. Together, he and Richard Fairbank led Capital One from a tiny upstart to one of the largest credit card issuers in the world, opening nearly 50 million credit card accounts in just eight years by targeting customers with personalized offers, powered by technology that set it apart from its peers. 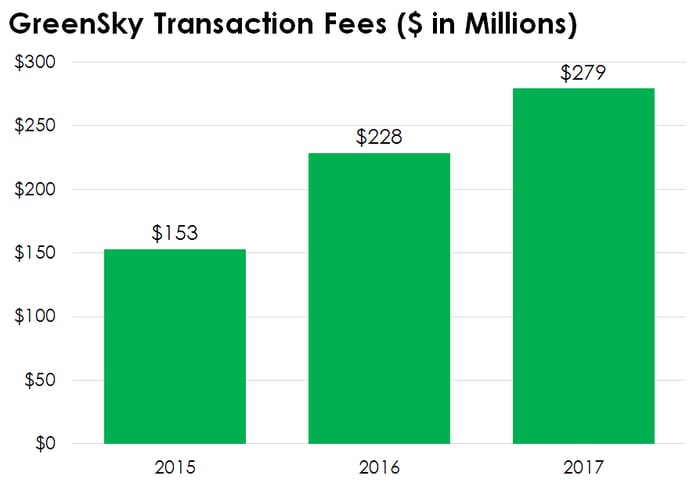 It's easy to see why Morris says this is a win-win-win business. Merchants get the ability to convert customers who are on the fence and upsell other services by offering affordable payment plans. Consumers get the flexibility to pay for a major purchase over time, potentially without paying a dime in interest. And banks score loan volume with little effort on their part.

Of course, GreenSky also benefits. It collects a fee on every transaction (which the merchant pays), plus a small stream of income over time for servicing the loan. The transaction fees are the big score, amounting to about 7.4% of transaction volume in 2017. Merchants are happy to pay the price, though, since getting about 93% of the transaction value beats losing 100% of it because they don't offer a financing option.

What GreenSky offers the banks

GreenSky sends most of its deals to just four regional banks -- SunTrust, Regions Financial, Fifth Third, and Synovus -- which together comprised about 89% of its commitments from lenders.

Regional banks like the high yields offered by consumer lending, but the business is notoriously difficult because of the high cost of finding customers and servicing loans that are sized at about $7,000, on average. GreenSky solves both of these critical issues by bringing in the customers and servicing the loans. Its bank partners simply provide the balance sheet -- the money to lend.

Though it doesn't share in the interest income, GreenSky sets aside a small amount of cash from each transaction to help paper over credit losses. At the end of March, it had set aside approximately 1.3% of outstanding loan balances in escrow to help smooth the earnings of banks who partner with it.

Some of GreenSky's loans feature 0% APR periods in which customers can repay the loan without paying interest. If a customer pays off the loan during this period, its bank partners would have risked their money without earning a dime in interest income. GreenSky takes on this risk, too, by paying interest on behalf of its borrowers who pay back a loan during the 0% APR period.

Since GreenSky acts as a servicer, it also helps the banks avoid the issue of scaling their servicing and customer support operations with loan volume, thus making it easier for banks to scale their lending up or down based on their ability to put more loans on their balance sheets.

Risks to the model

As investors have learned from fintech flops like LendingClub, businesses that seek to pair lenders with borrowers aren't immune from the risk inherent in lending. If anything, loan originators are leveraged bets on consumer lending since they live and die on volume.

Even if GreenSky is only on the hook for some of its bank partner's loan losses, it's heavily reliant on their willingness to fund unsecured consumer loans. And though it discloses that its weighted average borrower had a FICO score of 769 last quarter, unsecured loans are often low on the totem pole when borrowers feel the financial pinch. Borrowers would prefer to default on an unsecured loan than a car note since the car can be repossessed, for example.

Should consumer credit metrics deteriorate, GreenSky may have to eat more of the credit losses for its banking partners to keep them involved, and it could lose its partners altogether. It also doesn't help that most of its volume comes from home improvement and elective medicine purchases, which consumers are likely to defer in a recession.

Regulatory risk is an omnipresent, if difficult to quantify, risk. As mentioned earlier, many of its loans carry a 0% APR period during which a loan can be repaid at no cost to the borrower. If the balance isn't paid in full by the end of the 0% APR period, though, its borrowers are charged "deferred interest" on the entirety of their balance.

The Consumer Financial Protection Bureau has fired warning shots about the practice of charging deferred interest, writing letters to store card issuers last year. A snippet from the CFPB's letter appears below:

The Bureau's 2015 analysis of deferred-interest promotions revealed that a large portion of consumers who fail to repay their entire promotional balance before the deadline at the end of the promotional period do manage to pay off the entire balance and associated interest charges shortly thereafter. This data may indicate that many consumers do not fully understand how deferred interest promotions operate and the manner in which interest is assessed on these products.

Should regulators take aim at deferred interest plans, GreenSky may suffer lower origination volumes, since the 0% APR offer is undoubtedly a popular choice. (Consumers can also elect for a longer loan term at a low APR, consistent with a traditional personal loan.)

The blue sky for GreenSky

Of course, bulls can point to a big runway for growth in adding merchants in fragmented markets. The company says that sales in the home-improvement category stood at $315 billion last year. GreenSky has only scratched the surface, given it facilitated $3.8 billion in transaction volume in 2017.

This market is hotly contested. Synchrony Financial, Wells Fargo, and EnerBank USA have similar programs designed as a funnel for their own loan books. But GreenSky works with multiple bank partners, which potentially increases an applicants' approval odds, and its merchants don't have to pay an upfront fee just to get started.

Eliminating upfront fees and monthly service charges has been a boon for other fintech companies, including Square, which has made inroads with small businesses precisely because it is a low-risk, easy-to-understand product. If you don't use its services, you don't pay anything -- a compelling sales pitch.

Scale is everything. As GreenSky grows, its processes improve, and its margins in loan servicing will expand. With each new bank partner it adds to its program, it can approve a greater percentage of applicants, ensuring that its merchants continue to feed it business.

GreenSky strikes me as a different breed of fintech because it solves a real need: Helping small merchants connect with banks to offer attractive financing to customers who would otherwise defer or avoid a large purchase. It isn't trying to upend the traditional banking model, nor is it throwing caution to the wind by trying to make a better credit scoring model.

It is exactly what it is -- a funnel to connect creditworthy borrowers with banks who are hungry for loan volume. By all appearances, GreenSky has built a better mouse trap.