In general, high-profile name changes for well-known chains have not gone well. When Yum! Brands attempted to promote Pizza Hut's other offerings by marketing it as "The Hut," the campaign was met with a combination of indifference and Jabba the Hutt jokes. Similarly, Radio Shack's efforts to become "The Shack" brought it a soupcon of ridicule, and did nothing to stop its demise.

Even a recent test by Dunkin' Brands Dunkin Donuts -- to drop "Donuts" from its name hasn't truly resonated, nor has Domino's Pizza's decision to drop the word "pizza." As with the Yum! move, that last one was supposed to reinforce the idea that the chain sells more than its former namesake product. It's hard to call the switch a success, but at least it didn't have to be walked back like "The Hut" and "The Shack."

Now, as you've doubtless heard, another well-known brand has decided to change its name. Dine Brands' Global (NYSE:DIN) IHOP, which is short for International House of Pancakes, teased the move for few days, telling the world it would flip its capital P upside down and turn it into a lower-case b. Responses to the campaign on social media had folks guessing that the 'b' in the new name would stand for everything from bacon to bananas to brunch ... to what it actually does stand for: burgers. 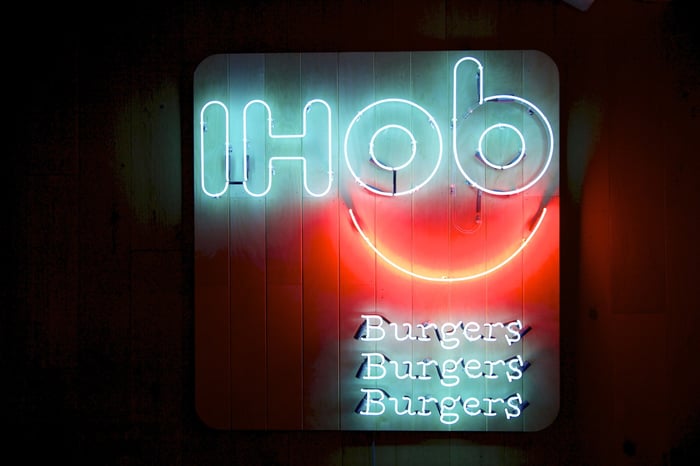 Clever, but not permanent

Pizza Hut and Radio Shack were serious about their name changes. IHOP isn't. The change is temporary -- a publicity stunt designed to draw attention to the fact that it's adding a line of what it's calling "Ultimate Steakburgers."

IHOP/IHOb has long offered a lunch and dinner menu in addition to the breakfast items it's best known for. These latest additions, however, reflect an effort by the chain to step up its burger game, and -- perhaps more important -- attract more customers during its slow lunch and dinner hours (though they will be offered during breakfast hours as well).

Yes, the restaurant is resorting to a fairly goofy publicity stunt, but it clearly worked. Media outlets have picked up the story, and kept it alive for multiple days. The struggling chain has certainly garnered more attention this way than it would have received if it simply ran some ads promoting a line of premium burgers.

The chain needs the help

While IHOP has been performing better than its sister chain, Applebee's, it's domestic same-store sales did fall by 1.9% in 2017 (compared to 5.3% for Applebee's. However, in the first quarter of 2018, it turned in a 1% comps gain, showing that the mostly breakfast chain has been building some momentum.

Adding premium burgers puts the company into a crowded and competitive space. There are a lot of better-burger players now, several fast-food stalwarts have improved their hamburgers, and a host of other casual sit-down chains offer their own "premium" versions as well.

Still, IHOP/IHOb has something those chains don't have -- a full, made-to-order breakfast menu. Yes, McDonald's has improved some of its burgers recently, and it now offers all-day breakfast, but its offerings don't really compare to IHOP's pancakes, omelets, and such.

This new burger line probably won't entice many customers away from Five Guys or even Shake Shack. It might, however, lure in more families and groups in the afternoon and evenings, when some members are in the mood for breakfast foods while others want lunch or dinner.

The chain's old menu -- its dinner offerings notwithstanding -- wasn't doing that well enough. This new one might, and that makes the attention and sampling that should be driven by this short-term name change a big win for the brand.