Of course, that's a much different scenario than Buffett actually investing in a marijuana stock like Canopy Growth. As far as I know, no one has asked him about the idea. But we can make an educated guess as to what Buffett's answer might be.

I recently read some of his letters to Berkshire shareholders to see what investing tips he's given over the years. In one of those letters written more than 40 years ago, Buffett spelled out his rules for buying stocks. Here they are -- and whether or not Canopy Growth passes Buffett's criteria. 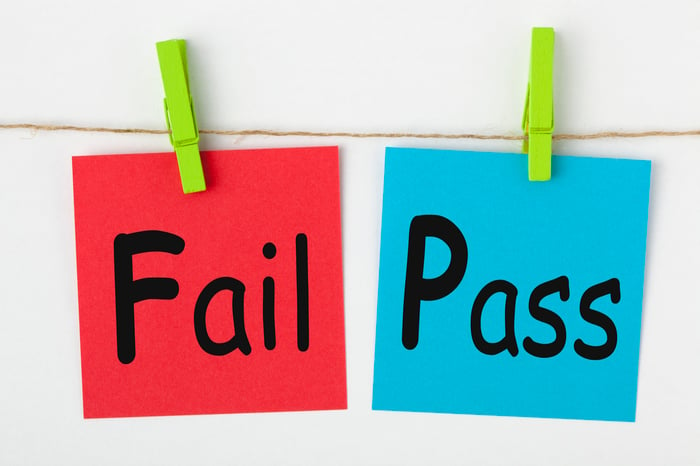 We can't read Warren Buffett's mind. However, I think it's fair to say that he would have no problem understanding Canopy Growth's business. The company's business model isn't nearly as complicated as the businesses of some other stocks in the Berkshire Hathaway portfolio.

Canopy Growth's business, in a nutshell, is to grow cannabis and distribute it to customers. Sure, that's a simplistic view. But Warren Buffett usually likes to keep things as simple as possible.

You might object that Buffett wouldn't be up to speed on the regulations of supplying marijuana in Canada, Germany, or other countries. While that's probably true, Buffett has guided Berkshire in the past to buy pharmaceutical stocks -- but I doubt he's an expert on all the Food and Drug Administration (FDA) regulations. I don't see that as a real issue.

2. Make sure the business has favorable long-term prospects

There are probably two schools of thought on this criterion. Some could look at the potential of a supply glut in the Canadian marijuana market and conclude that Canopy Growth's long-term prospects aren't that great. Others might point to the huge global marijuana potential and think that Canopy should be in fantastic shape over the long run.

My view is that both projections are right, but not both conclusions. I think that Canadian demand for marijuana will outstrip supply for a while after recreational marijuana is legalized in the country. Eventually, though, there'll be more supply than is needed to meet demand. That will result in a supply glut -- but only in Canada.

I suspect that global demand for marijuana will increase enough that Canopy Growth and its peers shouldn't have huge problems, although there probably could be some temporary unfavorable supply-demand imbalances.

But does Canopy enjoy a "moat" like Buffett desires for the companies he buys? Not much of one.

Marijuana is a commodity. Customers could easily switch to using marijuana produced by another company. Rivals could grow marijuana just as cheaply as Canopy does. However, there are hurdles to selling marijuana that governments put in place. Canopy, along with some of its larger peers, could enjoy at least a partial moat because of these tight regulations.

3. The company must be run by "honest and competent people"

Canopy Growth appears to check this box off. The company's management team has a solid track record of performance. Canopy didn't become the largest marijuana grower on the planet by accident.

However, Canopy's management has come under fire in the past. In early 2017, Canopy CEO Bruce Linton apologized to customers after traces of banned pesticides were found in medical marijuana sold by the company. I don't think this incident is a big concern, though.

The tainted marijuana was produced by Mettrum, a company that Canopy acquired in February 2017. But the marijuana with traces of pesticides was sold between January and March of 2016 -- well before Canopy took over. Canopy's leadership implemented new quality assurance processes and took ownership of the problems. That's what you'd want from a management team.

4. The price should be attractive -- or at least sensible

Over the years, Warren Buffett has changed his tune on valuation a little. Instead of insisting on a bargain price, he now wants to make sure that the price tag of a stock is "sensible." But Canopy Growth has a big problem when it comes to this investing rule.

Could Canopy's growth prospects justify its valuation? Maybe so. The company's market cap is a little over $6 billion. Aurora Cannabis Chief Corporate Officer Cam Battley recently stated that the global marijuana market could be as big as $180 billion in the future. Even if that estimate is overly optimistic by a lot, Canopy Growth could have enough opportunities to make the current stock price much less scary than it seems at first glance -- although not likely enough to entice Buffett.

The biggest strike against Canopy

Even if Canopy Growth satisfied all four of Warren Buffett's investing rules, it's very doubtful that he'd consider buying the stock. The biggest strike against Canopy is that it's in the marijuana business.

Back in the late 1980s, Buffett was asked to participate in Salomon Brothers' bid to take over RJR Nabisco. He declined to do so, stating, "I'm wealthy enough where I don't need to own a tobacco company and deal with the consequences of public ownership."

Warren Buffett is much wealthier now than he was back then. And marijuana is at least as controversial as tobacco was three decades ago. Buffett almost certainly wouldn't remotely consider buying Canopy Growth stock.

Of course, that doesn't mean the stock still can't be a winner. Many stocks that Buffett has snubbed went on to generate huge returns. But if you want to buy Canopy Growth, you'll need some different investing rules.