Shares of the clinical-stage cancer specialist Verastem (NASDAQ:VSTM) are up by double digits today on heavy volume, thanks to a positive clinical update for its lead product candidate at the European Hematology Association meeting in Stockholm over the weekend.

Turning to the details, Verastem noted that duvelisib produced a stunning 94% objective response rate as a front-line treatment in younger patients with chronic lymphocytic leukemia (CLL), when used in conjunction with a chemotherapy regimen called FCR. This combo regimen also reportedly generated a promising 26% complete response rate in this patient population. 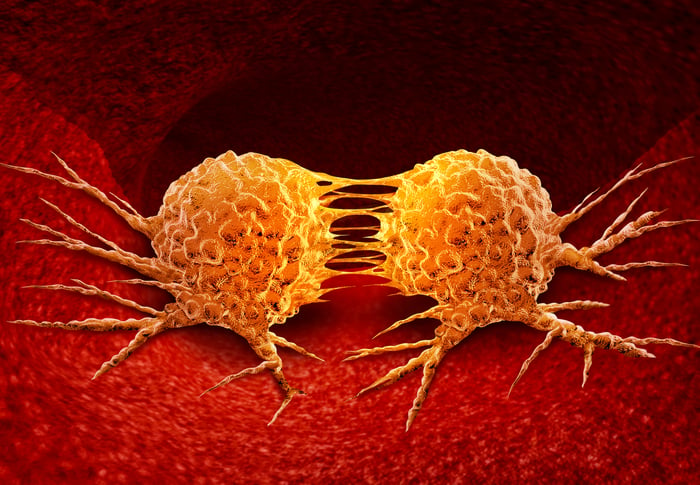 As of 11:00 a.m. EDT, Verastem's shares were up by a sizable 16% in the wake of this conference presentation.

These positive midstage data build upon duvelisib's encouraging late-stage readout in patients with advanced CLL that led to the drug's first regulatory filing earlier this year. In other words, duvelisib is starting to come across as a viable platform drug for various forms of hematological malignancies, which could translate into some truly stellar sales figures down the road.

While positive data readouts are a crucial steppingstone in the life of clinical-stage biotechs, the real test of duvelisib's emerging clinical profile will ultimately be the Food and Drug Administration's upcoming regulatory decision that's scheduled to be handed out by no later than Oct. 5. If the agency greenlights this drug, after all, Verastem will have a novel, well-differentiated drug on the market in the red-hot hematology space.

And that development should eventually spark takeover interest from multiple big pharmas and blue-chip biotechs. In short, this small-cap biotech stock isn't showing any signs of slowing down, perhaps making it an attractive buy right now.