Jacksonville, Florida-based third-party logistics (3PL) provider Landstar System, Inc. (NASDAQ:LSTR) enjoyed record revenue in the first quarter of 2018. The handsome $1.05 billion top line was accompanied by record quarterly gross profit of $155.5 million. Investors have applauded the performance: Though volatile, Landstar's stock has gained nearly 9% year to date, and over a 12-month period, the LSTR symbol has returned nearly 29%. As we look ahead to second-quarter results, which will be reported next month, can the Landstar maintain the vigorous earnings momentum that has supported its stock price ascent?

Trucking capacity is a tailwind

Landstar is benefiting, of course, from tight capacity in the freight truck market. As I noted last month, John Wiehoff, CFO of fellow 3PL provider C.H. Robinson Worldwide (NASDAQ:CHRW), recently gave an informative rundown of the factors contributing to the utilization of supply in the trucking market. These include an expanding U.S. economy, a shrinking pool of skilled truck drivers, rising e-commerce related shipping demand, and the recently implemented "ELD" (electronic logging device) regulations mandated by Congress. ELD seeks to make trucking safer through the implementation of advanced monitoring of the hours truck drivers log.

In Landstar's first-quarter earnings conference call, CEO James Gattoni indicated that he expects truck capacity to remain tight during the second quarter. Landstar's success in the back half of the year, then, will be predicated on its ability to reap the benefit of this tailwind. While the company does offer rail, air, and ocean cargo services, roughly 93% of revenue derives from truckload and less-than-truckload (LTL) services.

Landstar's trucking logistics services follows an "asset-light" model, in which most of its trucking services are sold by commission agents rather than employees and fulfilled by third parties. These third-party providers are broken down into two major groups: small, independent truck contractors, known as independent business capacity owners, or BCOs, and truck brokerage carriers. In 2017, BCOs and truck brokerage carriers accounted for 45% and 48% of total company revenue, respectively. 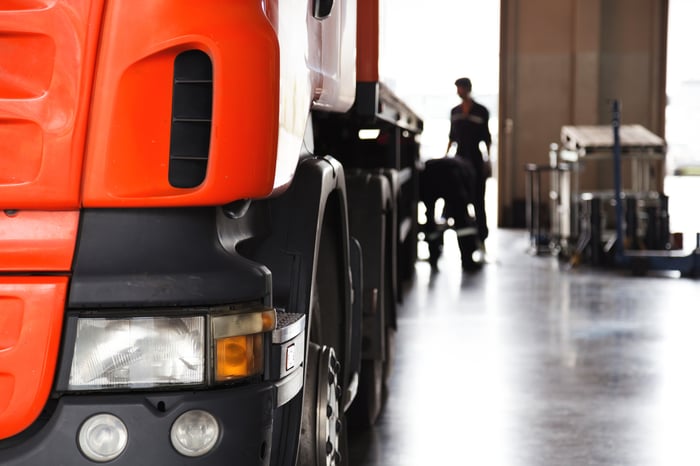 Signing on new carriers, in particular BCOs, is essential to sourcing shipping in a tight but growing market. In the first quarter of 2018, Landstar reported 9,868 trucks provided by BCOs, an all-time record, which represented an increase of 172 trucks over year-end 2017. Management points out that in the current environment of rising prices, BCOs are attracted to Landstar, which pays a percentage rate on shipments, translating into higher profit for these independent contractors.

The maximization of load is another critical tool in taking advantage of the capacity tailwind. During the first quarter of the year, the number of loads hauled via truck improved by 12% over the comparable 2017 quarter. Combine this with an increase of 21% in revenue-per-load hauled by truck, and you get a sense of the formula that drove total revenue up 34% in the first quarter of 2018 versus the prior year. For the second quarter, management expects an increase in number of loads hauled via truck in the low double-digits, and a revenue-per-load improvement of between 19% and 21%.

Finally, while it's true that high demand has created a climbing price environment in truckload and LTL shipping, Landstar prefers to focus on volume instead of price. Unlike C.H. Robinson, which derives about 60% of annual revenue from longer-term contractual rates, Landstar's commission sales agents price truck loads daily on the spot (i.e., current price) market.

Thus, today's boon can be tomorrow's headache if pricing reverses. To improve volume, the company has invested in technology resources, including mobile apps that give carriers more visibility into available freight opportunities they can bid on. The organization expects to invest $6 million to $10 million annually over the next two to four years in similar technology enhancements.

Allocating resources toward factors within your control is a pragmatic method for expanding a business. I'll end with a comment made by CEO Gattoni during the first-quarter call, which nicely sums up the execution on truckload volumes needed for Landstar to keep outperforming in the back half of 2018: "We live in a spot market world. We don't have a lot of influence over pricing. So, our team is charged with adding volumes."

Will Landstar Earnings Continue to Rise in the Back Half of 2018? @themotleyfool #stocks $LSTR $CHRW Next Article
Current