All year long, Terex (NYSE:TEX) stock has been pacing the S&P 500's performance -- and even leading it a bit, up 15% to the market's 14% gain. Today, shares are moving in and out of negative territory.

But pay the market's daily gyrations no heed. At least one analyst thinks Terex is a buy. 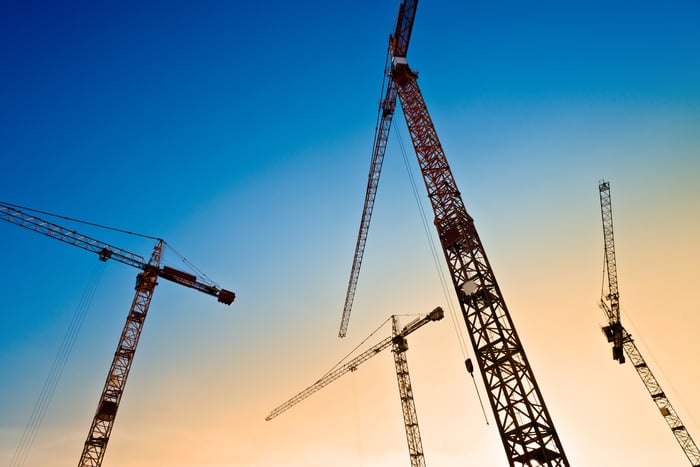 Jefferies & Co. upgraded Terex from hold to buy today. Priced around $40 a share now, the analyst thinks Terex shares could hit $50 within a year -- a 25% gain -- according to an update just out on TheFly.com.

Jefferies bases its forecast on "improving backlog and visibility into 2019," which should translate into sales gains down the road, and sales of cranes in particular. What's more, the analyst argues that Jefferies has "significant internal margin opportunities" to improve the profit margin it earns on those sales.

What other analysts are saying

That seems an awfully fast growth rate for a heavy equipment manufacturer like Terex, which splits its business three ways -- aerial work platforms (about 48% of revenue), cranes (27%), and materials processing (25%). Still, if Terex manages to hit the targets that Wall Street has set for it, it's hard to argue the stock is anything but a bargain at 16.5 times trailing-12-month earnings -- and only 14.8 times free cash flow.

What Terex itself said last quarter

So are these growth forecasts believable? Last quarter, in Terex's Q1 2018 earnings report, CEO John Garrison noted that Terex's "strong financial performance reflects the improvements made to our operations and capital structure, and broad-based improvements in our global markets." Both aerial work platforms and materials processing were "off to a great start," while cranes "improved compared to the prior year."

As a result, Terex felt confident enough last quarter to boost its earnings guidance for this year to $2.70 to $3.00 per share.

Granted this was an adjusted earnings forecast, but according to analysts who follow the stock, the difference between Terex's GAAP earnings this year and its pro forma adjusted profits is only going to be about $0.08 per share. This suggests to me that Jefferies' prediction of $2.81 per share in GAAP earnings is probably in the ballpark. (And of course, Terex's free cash flow numbers are looking better than reported GAAP earnings, which is another point in the stock's favor.)

Assuming Terex delivers on its promise this year, and continues to grow as fast as analysts expect it to in years to come, I think Jefferies is more likely right than wrong that this stock will outperform the S&P 500 going forward.