Shares of the commercial-stage biotech Heron Therapeutics (NASDAQ:HRTX) gained as much as 36.3% today on abnormally high volume. What triggered this massive surge higher?

Investors are bidding up the biotech's stock in response to the company's announcement that its experimental pain medicine, HTX-011, received the coveted Breakthrough Therapy designation from the U.S. Food and Drug Administration (FDA) today. Breakthrough Therapy designation allows for a faster regulatory review process and is reserved for drugs that provide major advancements in the treatment of serious conditions. 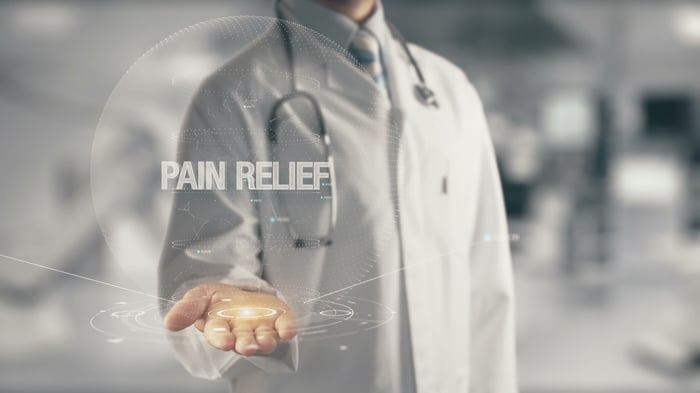 As of 1:22 p.m. EDT Friday, Heron's shares are still up by 33.5% in the wake of this positive regulatory development.

The FDA reportedly granted HTX-011 Breakthrough Therapy status after reviewing the drug's strong mid- and late-stage trial results in patients experiencing postoperative pain. While the drug's ability to relieve pain in a timely manner undoubtedly played a role in this review, the fact that patients in these trials also required fewer opioids to manage their pain, compared to those receiving the current standard of care, was also likely a key factor in the agency's decision. After all, there is a well-documented need for new pain medications that are less addictive and reduce opioid dependence, but can still provide adequate relief in the acute postoperative setting. Based on the trial results thus far, HTX-011 appears to check all those boxes.

Heron is in the process of putting together a New Drug Application (NDA) for HTX-011. According to the company, this NDA should be in the FDA's hands before year's end. That's a potentially major development in the company's life cycle because HTX-011 appears to have a real shot at generating hundreds of millions in sales at peak. As such, it's not surprising that investors are piling into this mid-cap biotech stock today.