You don't even have to know what gene therapy is to know that it's hot right now. Gene therapy is the approach of inserting a healthy gene into cells to correct a genetic disorder. The idea has been around for decades, but gene therapy is really hitting its stride now.

Three gene therapy stocks aren't just hot in 2018 -- they're red-hot. Shares of  Sarepta Therapeutics (NASDAQ:SRPT), Solid Biosciences (NASDAQ:SLDB), and uniQure (NASDAQ:QURE) have nearly doubled or generated even greater gains so far this year. But is it too late for investors to buy these gene therapy stocks? Here's what you need to know. 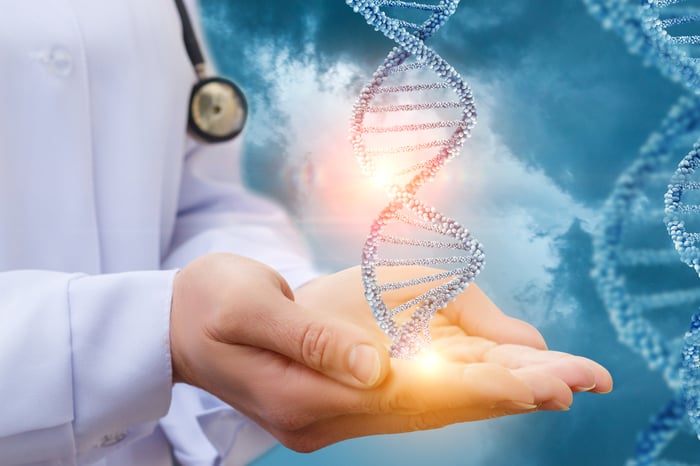 1. Sarepta Therapeutics: Its first gene therapy could be a winner

Sarepta Therapeutics' tremendous performance so far in 2018 -- the stock is up around 160% -- is a carryover from last year. The stock soared 102% in 2017, thanks to a significantly better-than-expected launch for Duchenne muscular dystrophy (DMD) therapy Exondys 51.

Sales for Exondys 51 picked up even more momentum this year. Sarepta has also had other good news over the last several months. The biotech forged a deal with Myonexus Therapeutics to gain five additional pipeline candidates, bringing Sarepta's total number of programs in development to 21.

Exondys 51 is an RNA-targeted therapy, not a gene therapy. However, only a few days ago Sarepta announced fantastic news from a phase 1/2 study of its most advanced gene therapy, AAVrh74.MHCK7.micro-Dystrophin. Patients taking the experimental gene therapy experienced a significant reduction in levels of a key enzyme linked to DMD-related muscle damage. Although the results from the study are very early and were for only three patients, they could represent a huge leap forward in the treatment of DMD.

2. Solid Biosciences: Hold on, hold off

Solid conducted its initial public offering (IPO) in January 2018. The stock got off to a great start, more than doubling by early March. Then the wheels came off. Solid announced on March 14 that the FDA had placed a clinical hold on the phase 1/2 study of SGT-001 due to patient safety concerns. Solid Biosciences stock plunged on the news.

Despite the major blow, the biotech stock slowly began to claw back some of its previous gains. And on June 14, Solid received word that the FDA was lifting the clinical hold after the company successfully answered all of the agency's questions about the SGT-001 study. Solid Biosciences stock skyrocketed and is now up more than 150% year to date.

3. uniQure: A pivotal period on the way

After shooting up 250% in 2017, uniQure stock has already almost doubled so far this year. And that big gain has come despite the biotech conducting a $147.5 million stock offering in May that diluted the value of existing shares.

What's behind uniQure's success? The biotech reported good news for two experimental gene therapies. UniQure plans to advance AMT-061 to a pivotal clinical study targeting treatment of hemophilia B in the third quarter of 2018. On May 21, the company announced new data from a phase 1/2 study that showed that gene therapies delivered via adeno-associated viruses type 5 (AAV5) could be viable for at least 97% of hemophilia B patients.

Are they still buys?

I think investors should look at Sarepta differently than they do Solid Biosciences and uniQure. Sarepta already has a successful commercial product, while the other two are still clinical-stage biotechs.

Exondys 51 could become a blockbuster drug over time. However, it's possible that Sarepta will have to conduct additional clinical studies to win European approval for the RNA-targeted therapy. But with a market cap of more than $9 billion, Sarepta needs more from its pipeline for the stock to move significantly higher.

The biotech could get some help from its other late-stage RNA therapies, golodirsen and casimersen, which also target DMD but involve skipping different exons than Exondys 51 does. Sarepta thinks that the combination of Exondys 51 and these other two drugs could generate peak annual sales of $2 billion or more.

However, even if the company's optimism proves right, Sarepta stock already reflects most of the anticipated growth. The biotech's gene therapy is very promising, but it's also still very early. I have liked Sarepta for a long time, but I'm not confident that the stock can sustain its incredible momentum.

I suspect that Solid Biosciences could steal some of Sarepta's thunder if SGT-001 is successful. I also think that uniQure's chances for AMT-061 in treating hemophilia B are pretty good.

But both stocks are still very risky. Solid Biosciences and uniQure claim market caps of around $1.4 billion. A lot of growth is already baked into these biotechs' stock prices. In my view, most investors would be better off looking elsewhere after Solid's and uniQure's big runs this year.