Shares of Starbucks (NASDAQ:SBUX) tumbled 9% on June 20 after the coffee giant stated that its global comparable store sales would only rise 1% for the third quarter -- its slowest growth in about nine years. It also expects flat to negative comps growth in China, its fastest growing market.

In the US, its biggest market, Starbucks plans to close about 150 company-owned stores next fiscal year. The company also disclosed that sales of its signature Frappuccinos had fallen 3% annually year-to-date, compared to 4% growth in 2017. 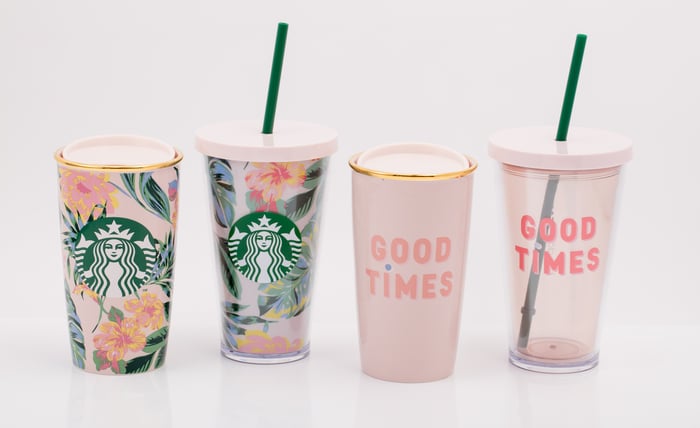 These problems all indicate that Starbucks, which dipped 3% over the past three years as the S&P 500 rallied over 30%, could be in serious trouble. Let's dig deeper into its business to see if it's time to sell this underperforming stock.

How Starbucks' growth got derailed

Former CEO Howard Schultz brought Starbucks back from the brink with a remarkable turnaround between 2008 and 2016. Schultz focused on improving the quality of the chain's coffee, shutting down weaker stores, firing executives, expanding Starbucks' digital ecosystem, and opening stores in China.

Starbucks' digital expansion plans temporarily backfired as increasing use of its mobile app caused traffic jams between walk-in and mobile customers. Starbucks also struggled with controversies, including a tone-deaf attempt to address racial tensions with its #RaceTogether campaign in 2015 and the arrest of two black men at a Philadelphia location earlier this year.

Schultz leaves as growth dries up

The cracks started appearing in the third quarter of 2016, when Starbucks' global comps growth dropped to just 4% -- missing the consensus estimate of 5.7% and representing the company's softest growth in years.

At the time, Schultz reminded investors that Starbucks had posted 25 straight quarters of at least 5% comps growth, and claimed that its slowing US comps growth was an "anomaly". Unfortunately, that "anomaly" marked the beginning of a major deceleration in Starbucks' growth.

Instead of leading another turnaround effort, Schultz announced his resignation as CEO last December, and was succeeded by Kevin Johnson this April. Schultz pivoted back to his previous role as executive chairman, but then announced that he would also leave that position by the end of June.

Schultz's decision to abandon both roles as Starbucks' growth is decelerating raises troubling questions about the coffee chain's long-term future.

Evaluating its growth in the US and China

Starbucks' closure of 150 stores in the US isn't that troubling, since the company still has over 17,000 cafes in the country. The company also still expects to grow its US store count by 5% this year and 3% next year as it shutters weaker stores -- so fears of over-saturation are overblown. But in China, Starbucks could fall into the trap of using new store openings to drive sales growth. Last quarter, Starbucks reported that its comps in the China/Asia-Pacific (CAP) region rose 54% annually as it opened 29 new locations. But the CAP region's comps only grew 3%. Starbucks' expectation of flat to negative sales growth in China for the third quarter casts a dark cloud over those growth plans.

Do investors expect too much?

Wall Street still expects Starbucks' revenue and earnings to rise 11% and 18%, respectively, this year. The stock isn't expensive at 19 times forward earnings, and its forward yield of 2.1% could appease patient investors.

Those numbers indicate that Starbucks is cheaper than both stocks. However, Starbucks' comps growth could still turn negative over the next few quarters, and Johnson's turnaround efforts -- which include expanding the company's global reach via the Global Coffee Alliance, bolstering its growth in the US and China, and boosting shareholder value with bigger dividends and buybacks -- could flop. Starbucks might eventually break out of its rut, but without any catalysts on the horizon it might be a good time to sell the stock.