During Apple's (NASDAQ:AAPL) fiscal year 2015, the company broke two records: It shipped a record number of iPhones, and its iPhone business generated record revenue, driven by both the surge in iPhone shipments as well as growth in iPhone average selling prices.

Apple shipped more than 231 million iPhones during its fiscal year 2015 and generated more than $155 billion from those shipments. 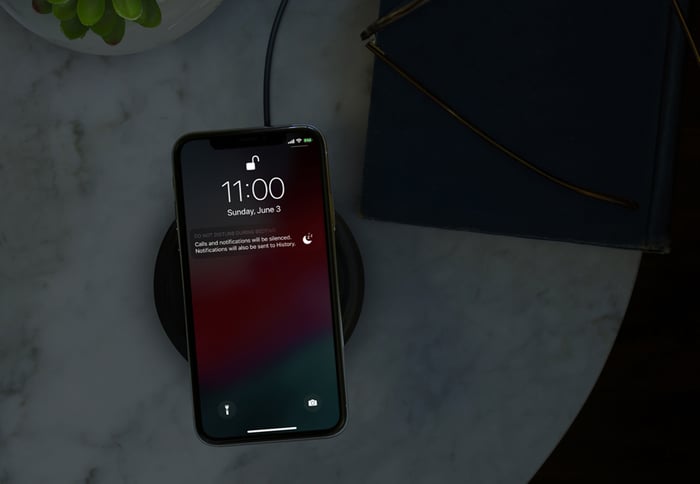 That success was due to the enormous popularity of the company's then-new iPhone 6 and iPhone 6 Plus smartphones, which represented Apple's first large-screen iPhones. Apple was late to bringing out jumbo-sized iPhones, so when Apple finally delivered what customers had been asking for, it enjoyed an enormous surge in both iPhone unit shipments as well as average selling prices as it satisfied pent-up demand.

During Apple's fiscal year 2015 -- the year during which the iPhone 6 and iPhone 6 Plus were Apple's flagship models -- the company saw iPhone unit shipments grow 37% year-over-year with iPhone revenue up an eye-popping 52%.

There's a reason Apple's iPhone 6 and iPhone 6 Plus product cycle is widely referred to as a "super cycle."

Since then, Apple has had a hard time matching either record, as the table below illustrates :

During Apple's fiscal year 2018, the company is on track to finally beat the iPhone revenue record that it achieved in fiscal year 2015 thanks to a surge in iPhone average selling prices attributable to the introduction of the premium-priced iPhone X.

The company may fall short this year, but it seems there's a good chance that Apple will finally break its unit shipment record in fiscal 2019.

The iPhones that Apple launched in the fall of 2017 were certainly good, but there were obvious gaps in the portfolio. For example, Apple didn't have a larger version of the iPhone X to appeal to users who prefer larger screen phones.

Apple's more mainstream models -- iPhone 8 and iPhone 8 Plus -- featured substantial internal upgrades, like the A11 Bionic processor, but they looked very similar to their predecessors.

In a market environment where Apple's competitors have been making rapid improvements and changes in form factor across all of their products, Apple's mainstream iPhone 8 and iPhone 8 Plus -- which, combined, outsold the ultra-expensive iPhone X -- may have felt a bit stale.

TechRadar, in its review of the iPhone 8, criticized the device and its larger sibling for "looking ever-more dated against the competition."

With the lineup that Apple is set to release this fall, the company is set to bring a much more competitive and complete lineup of devices to the table.

Apple's next mainstream iPhone -- the one that'll replace the iPhone 8 and the iPhone 8 Plus -- is expected to get a design makeover to look more like the current, modern-looking iPhone X, but it'll likely be priced in-line with the devices that it's set to replace.

Moreover, Apple is expected to introduce a larger version of the next iPhone X, presumably called the iPhone X Plus, that should help broaden the appeal of the company's lineup.

The products will become available in late 2018, but most of the sales will come in the company's fiscal 2019, which begins in the fall.

Ultimately, Apple's more competitive iPhone lineup could both help catalyze upgrade activity among current iPhone buyers to a greater extent than the current lineup did, as well as allow Apple to gain market segment share in the premium smartphone market.

As long as Apple can deliver such record unit shipments without too big of a hit to iPhone average selling prices, then Apple's iPhone business overall could be set for (another) record year.