After a turbulent couple of years for the bank, Wells Fargo (NYSE:WFC) finally gave its investors a pleasant surprise. Not only was its 2018 capital plan approved by the Federal Reserve, but it included a huge increase in the bank's buyback authorization. As a result, the stock is up sharply -- as of 10:30 a.m. EDT Friday, shares are up by nearly 5%.

Here are the details of Wells Fargo's approved capital plan, what it means to shareholders, and whether this means that now could be a smart time to buy the stock.

Wells Fargo's capital plan, like those of most big banks, contained two parts -- a dividend increase and a new share-repurchase authorization.

On the dividend side of things, the bank is increasing its quarterly payout by about 10%, from $0.39 to $0.43. Based on the current stock price, this translates to an annualized dividend yield of about 3.1%. Compared to the other big banks, this is a rather small dividend increase, percentagewise. For comparison, Bank of America (NYSE:BAC) is increasing its dividend by 25%, Citigroup (NYSE:C) is giving its shareholders a 41% raise, and JPMorgan Chase (NYSE:JPM) is boosting its quarterly payout by 43%.

On the other hand, Wells Fargo's buyback plan is a big story. The bank plans to spend as much as $24.5 billion on buybacks over the next year. This is the largest buyback plan of the "big four" banks by a significant margin and is more than double the bank's $11.5 billion buyback that was part of its 2017 capital plan. In fact, if Wells Fargo buys back all $24.5 billion it plans on, it would translate to a roughly 9% reduction in the bank's outstanding shares.

What the massive buyback increase says

All of the big banks spend the majority of their capital return on buybacks, but Wells Fargo is taking it to the next level with this year's massive increase.

In a nutshell, companies emphasize buybacks when they think their stock is a compelling value. And in Wells Fargo's case, this certainly makes sense. Since the fake-accounts scandal came to light in late 2016, Wells Fargo has underperformed the overall financial sector by a staggering 19 percentage points, and that's including today's 5% pop. 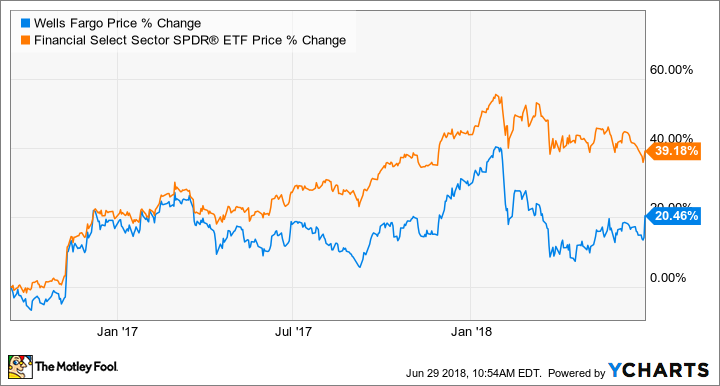 CEO Tim Sloan has set in motion a turnaround plan, intended to rebuild consumers' trust and to change the bank's culture for the better; a more than doubling of the company's buyback authorization is a big sign that management thinks the plan will be a success.

Is Wells Fargo worth a look?

To be clear, I've been rather critical of Wells Fargo stock as an investment ever since the Federal Reserve issued its unprecedented penalty that prohibits the bank from growing until "substantial improvements" are made.

This doesn't necessarily change my stance. While the capital plan was indeed approved by the same Federal Reserve that penalized the bank, Wells Fargo's capital levels were never in question. Strong capitalization does nothing to negate years of bad behavior. For me, there are still too many unanswered questions regarding what constitutes "substantial improvements," how many customers Wells will ultimately lose as a result of its scandals, and more.

Having said that, it is undoubtedly a positive sign for the bank that management wholeheartedly believes in its turnaround plan and feels that the stock is a major bargain at its current price. So, while this doesn't exactly make me a buyer of the stock, it's definitely a big step in the right direction.