Since its founding in 2007, Dropbox (NASDAQ:DBX) has made a name for itself providing a convenient way for individuals to back up their photos and videos in the cloud. But over the last few years, Dropbox has begun to tackle the needs of corporate clients, a market that Box (NYSE:BOX) has been serving since 2005.

The cloud file-sharing market is estimated to total $50 billion, according to IDC. Given that both companies had combined revenue last year of $1.6 billion, it would be easy to say you should buy both stocks, but that wouldn't be any fun. This is an investment case showdown between the two, and only one can be the better buy. 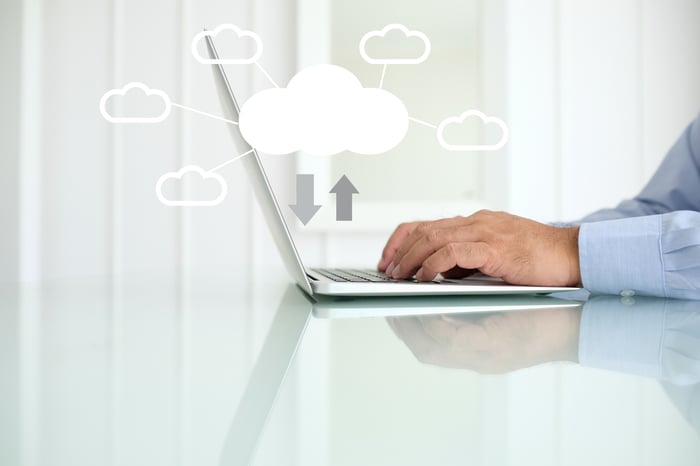 Dropbox has gained a wide following among individuals who want a convenient and free option to store photos and files in the cloud. Today, it has over 500 million registered users across 180 countries.

But since Dropbox can't make any money giving millions of customers free storage, in recent years it has shifted to offering subscription plans to businesses, as well as individuals. CEO and co-founder Drew Houston's goal is to turn Dropbox into a global collaboration platform that is compatible with a variety of top corporate software providers, including Microsoft, Oracle, and salesforce.com, among others.

The familiarity that millions of individuals have from using Dropbox for personal use provides an important advantage when convincing corporations to choose its service over competitors'. In 2017, the company reported that over 40% of its Dropbox Business subscribers were previously subscribers to one of its plans for individuals.

Management believes the majority of its user base uses Dropbox for work, which provides an opportunity to convince those non-paying users to upgrade to a subscription service. Out of its 500 million users, only 11.5 million are subscribers, but that was enough to generate $1.1 billion in revenue in 2017. It's easy to imagine Dropbox doubling its revenue just by persuading another 11.5 million to try a subscription plan, which start at $8.25 per month for individuals.

The company is not profitable yet, having lost $112 million in 2017, but that has quickly narrowed from a loss of $325 million in 2015. Both Dropbox and Box take on a lot of up-front costs in building out the necessary infrastructure for growth, but with revenue growing faster than operating expenses, it's only a matter of time before it turns a profit. Revenue has nearly doubled over the last three years, while operating expenses grew 69%.

In the meantime, Dropbox is generating plenty of free cash flow -- to the tune of $305 million in 2017, which allows management to reinvest in growing the business.

Box has a big lead in the enterprise market

Box is well-entrenched with the biggest companies in the world, serving 69% of the Fortune 500. It has 85,000 corporate clients, which helped Box generate $506 million in revenue last year.

What these big corporate clients like about Box is its customer service and its best-in-class security features -- a must-have in this era of cybersecurity threats.

Box's 109% retention rate shows how satisfied those corporate customers are. Achieving a retention rate above 100% indicates customers are not only sticking with their current service, but adding extensions to their existing plan as Box rolls out additional features -- a clear sign that Box has a very sticky service.

The company generates half as much revenue as Dropbox, but Box has seen its revenue grow nearly tenfold over the last five years. Like Dropbox, Box has not yet turned a profit, but it generated positive free cash flow of $50 million in fiscal 2018, which is the first year Box has generated positive free cash flow. With Box growing fast, it should have no problem building up sizable profits in the future.

Since neither is profitable, the price-to-earnings ratio won't help us. Instead, we can compare the two on the basis of price-to-sales and price-to-free-cash-flow ratios.

One key difference between the two is that Dropbox spends the same amount on sales and marketing but generates twice as much revenue as Box. This reflects the advantage Dropbox has with word-of-mouth marketing within its 500 million users.

Enterprise clients trust Box for its security features, but the familiarity that employees have with Dropbox may allow it to stay ahead of Box over the long run as it convinces companies around the world that its software is the easiest to use.

Dropbox also has a financial advantage over Box, with more annual free cash flow generation and $845 million in cash on the balance sheet compared to only $217 million for Box. This gives Dropbox more resources to invest in new features, such as security, to compete with anyone.

Additionally, because Dropbox has its roots in serving individuals, management wants to expand its paid services to other working professionals like content creators (e.g., artists, songwriters, designers, etc.) who Box may not be able to serve as effectively given its historical focus on large corporations.

If it wasn't clear already, I believe Dropbox is the better box to buy.