Back in November, it became clear that Starbucks (NASDAQ:SBUX) had transitioned from a high-multiple growth stock to more of a dividend stock.  Earlier this month, Starbucks upped the ante, hiking its dividend another 20% for the second time in less than a year, and increasing its three-year cash return target (including buybacks) from $20 billion to $25 billion.

That new $25 billion target is a lot -- more than 33% of the company's market capitalization. And Starbucks' quarterly dividend of $0.36 now sits a lofty 44% higher than this time last year. That's some serious cash for shareholders -- companies don't usually hike their dividends more than once a year. Starbucks' dividend yield now sits at 3% based in the recent stock price.

Yet despite Starbucks' generosity, its stock declined nearly 10% in conjunction with the announcement. What's going on? 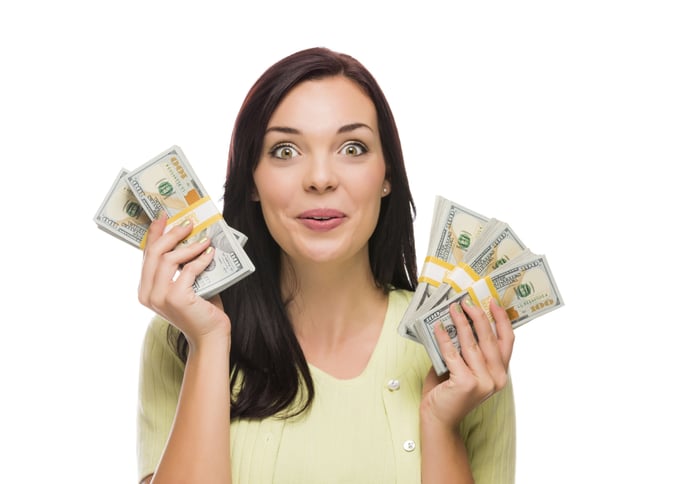 Perhaps the dividend raise was the sugar to help the medicine go down, as Starbucks also unveiled some not-so-hot news in its June 19 presentation.

Same-store sales are now projected to have grown only about 1% in the fiscal third quarter, well below analyst estimates. The company also lowered its full-year guidance for non-GAAP (generally accepted accounting principles) earnings per share, from a range of $2.48 to $2.53 to a range of $2.39 to $2.43.

A company-wide store closure for anti-bias training on May 29 played a part in the dip in quarterly estimates. But at a consumer conference on June 19 (the first major presentation since Howard Schultz left the company), management pointed to a decline in sugary, cold Frappuccinos as the main culprit. Given the trend toward lower-sugar beverages and health-conscious lifestyles, the Frappuccino may be a continuing headwind. CEO Kevin Johnson also didn't mince words, saying in a press release that "... our recent performance does not reflect the potential of our exceptional brand and is not acceptable" (emphasis mine). Johnson continued: "Over the past year we have taken several actions to streamline the company, positioning us to increase our innovation agility as an organization and enhance focus on our core value drivers which serve as the foundation to reaccelerate growth and create long-term shareholder value."

Johnson comes from the tech world, and seems intent on getting Starbucks on a more disciplined and efficient path. As such, he's reining in Starbucks' growth plans to focus more on profits and returns. The continuing streamlining of the business will manifest itself in a few different ways.

First, the company will scale back new-store growth in the U.S. market to 3%, down from a range of 4% to 6% over the past four years. This will include shutting existing stores in coastal urban areas that may be a bit too saturated (and where rent and labor are high), and focusing on more underpenetrated markets in the Midwest and South. The company will also shift its new-store mix in the U.S. to more owned-and-operated stores, which are more profitable than licensed stores.

But outside the core geographies of U.S. and China, Starbucks will look to license more stores.

Rounding out the cost-cutting efforts, Johnson announced the company would be hiring a consultant to find ways to slim down on general and administrative expenses, which he believes are bloated compared to Starbucks' peer group.

Digital will be key

While Starbucks is now aiming for more discipline, the company is not done growing, and Johnson and CFO Scott Maw also outlined a growth vision for 2019.

A big emphasis was put on digital relationships. Soon, the company will be rolling out a credit card with JP Morgan Chase, whereby customers can earn Starbucks "stars" (rewards points) outside of Starbucks. The hope is that as people earn more rewards points, they'll eventually convert to My Starbucks Rewards members. Starbucks has seen strong results among Rewards members, and plans a number of personalization initiatives to help deepen relationships. The number of Starbucks Rewards active members has grown 13% since last year, and management expects the new digital relationship initiatives to drive 1% to 2% of comparable sales in 2019.

The recent presentation certainly gave investors food for thought, with growth headwinds counteracted by the generous shareholder-friendly buyback plans and dividends. Johnson is now in the spotlight, and his new digital and China plans will be tested.

Meanwhile, investors who believe in Johnson's strategy for lower-but-more-efficient growth will now receive an increased dividend as they wait for his plans to develop.