Tesla's (NASDAQ:TSLA) quarterly update on its vehicle deliveries is likely just a few days away. With the automaker in the midst of its most rapid ramp-up in vehicle production yet, the update is particularly important this time around.

While the media seems mostly focused on whether or not Tesla will hit its target production rate for its Model 3 of 5,000 units per week by the end of the quarter, investors would do well to zoom further out to get a more holistic view of the automaker's current situation. For instance, given Tesla's record losses and its accelerated cash burn recently, investors should look for an update on the company's path to profitability.

Of course, Tesla's current production rate for Model 3 will be important, too. But Tesla typically includes more in its vehicle deliveries updates than delivery and production numbers. Investors, therefore, should use all of the information in the report to get an idea of how Tesla is faring. 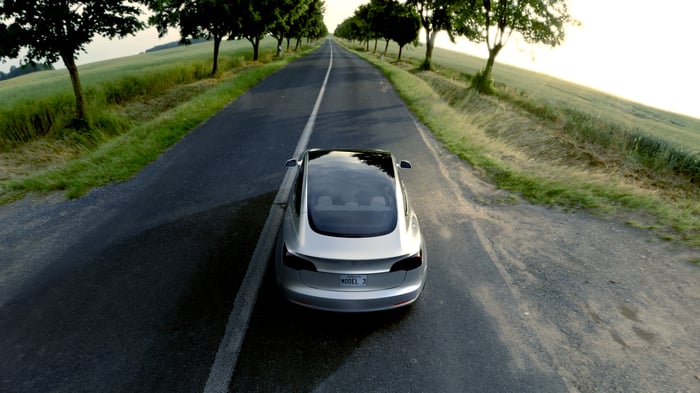 So, beyond checking on Tesla's current weekly production rate for Model 3, here are five important items investors should look for in the company's update:

After delivering just 860 Model 3 cars in the fourth quarter of 2017, deliveries increased to 8,180 in Q1. Forecasting Model 3 deliveries for Q3 is extremely difficult, but it seems reasonable to expect 21,000 units or more.

Tesla CEO Elon Musk recently said he expected the company to be profitable in the second half of the year. Investors should look for the company to reaffirm this outlook in its update. In its first quarter, Tesla reported a net loss of $785 million and negative free cash flow of $1.05 billion. If Tesla can't become profitable soon, it will need to raise capital through debt or equity.

4. An update on demand

Tesla often provides updates on demand for its vehicles in its quarterly updates on production and deliveries. In its first-quarter vehicle deliveries update, for instance, Tesla said net orders for Model S and X were at an all-time high during the period. In addition, Tesla said its Model 3 reservations remained stable throughout the quarter.

Investors should look for similar updates on demand when Tesla reports its second-quarter vehicle deliveries.

Whether Tesla misses, hits, or exceeds its target production rate for Model 3 of 5,000 units per week, investors are going to be wondering what's next. The automaker has said it eventually wants to add incremental production capacity for Model 3, increasing it to 10,000 units per week. But before Tesla gets to this point, it wants to "incorporate our learnings to continue to increase output on our existing manufacturing lines beyond 5,000 units per week," Tesla said in its first-quarter shareholder letter.

Perhaps Tesla will provide some details about its next production rate target for Model 3.

Since Tesla usually reports its vehicle deliveries within three days of a quarter's end, investors can expect an update from Tesla by July 3.