Shares of Sorrento Therapeutics, Inc. (NASDAQ:SRNE) are down 10.2% as of 3:12 p.m. EDT Thursday on higher-than-average volume, but it's not clear what's going on with the biotech. Sorrento announced on Tuesday morning that it was acquiring Kimberly Clark's Sofusa lymphatic delivery technology, which consists of nano-structured microneedles to deliver drugs into lymphatic capillaries beneath the skin.

However, that news had minimal impact on the biotech's share price prior to the U.S. Independence Day holiday. 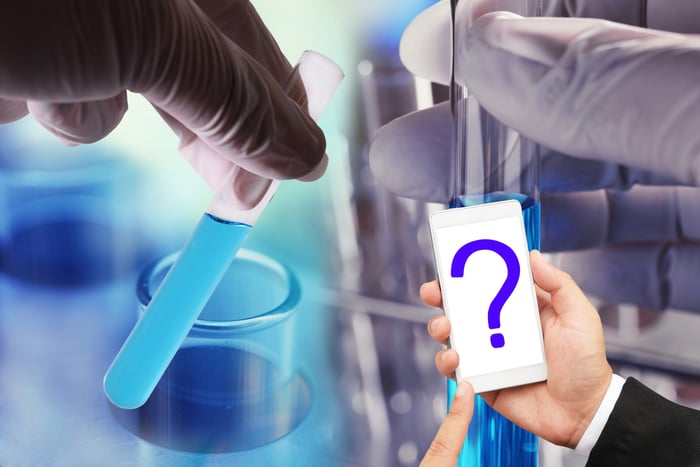 It's possible that we're seeing a delayed reaction to this acquisition. No terms of the deal were announced, so perhaps some investors worried that Sorrento could be paying too much. Shareholders have learned that the fine print with Sorrento's transactions can be troubling, as seen earlier this year with a convertible note offering.

Another possibility is that rising tensions over trade between the U.S. and China could be impacting Sorrento. The company announced in June that it planned to list on the Hong Kong stock exchange. Investors could have been spooked by worries about the new listing in light of the escalating war of words and tariffs.

Should investors be concerned by the latest drop? Probably not -- at least not at this point. Perhaps more information will be revealed over the next few days that will help explain why Sorrento stock fell. It could be that, in a few months from now, regulatory filings with the Securities and Exchange Commission will show that a big institutional investor was selling shares, causing downward pressure on Sorrento's share price.

On the other hand, we might never know for sure why Sorrento stock sank on Thursday. The reality is that small-cap biotech stocks swing up and down by 10% or more fairly frequently without any discernible reason. Sorrento Therapeutics' beta value of 3.51 shows just how volatile the stock is.

Bulls still are eagerly awaiting the biotech's planned U.S. launch of the Ztlido lidocaine topical system in the fourth quarter of 2018. They're also looking forward to Sorrento's phase 1 clinical studies of its CD38 chimeric antigen receptor T cell (CAR-T) therapy and resiniferatoxin in treating osteoarthritis knee pain. Bears are wondering what's taking the company so long to launch Ztlido, since the drug won Food and Drug Administration approval in February 2018.

Bystanders, on the other hand, might be best served by staying on the sidelines, considering Sorrento's volatility. There are plenty of stocks out there, including biotech stocks, with clearer pathways to success and less uncertainty.