One of the largest tech companies in the world is looking to spin off its music subsidiary into the public markets. Chinese tech giant Tencent (OTC:TCEHY) is proposing spinning off Tencent Music Entertainment (TME), according to a recent filing by the parent company. TME could raise as much as $1 billion through the offering, which may value TME at $30 billion. That's quite a bit more than the subsidiary's most recent valuation of $12 billion. 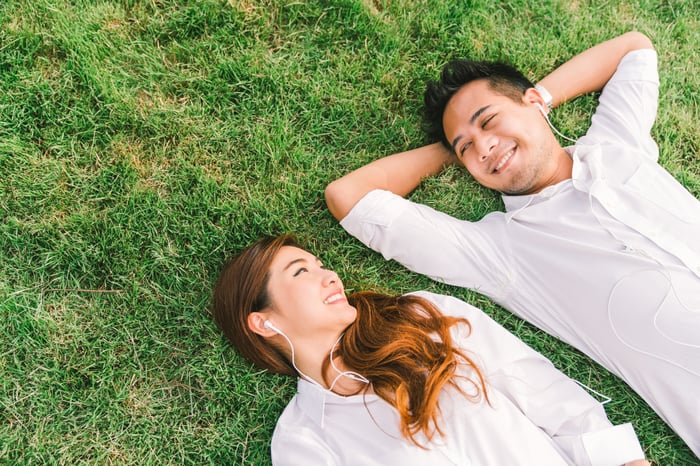 Tencent Music is the largest music streaming service not just in China, but in the world. At the end of 2017, the service had 700 million monthly active users (MAUs), including 120 million paid subscribers, according to Bloomberg. Those figures overshadow both Spotify and Apple.

"Tencent's understanding of how to make money from traffic is far better than Spotify," JPMorgan analyst Alex Yao told Bloomberg. "If you want to make a singer not only sell copies but also have a great way to interact with fans, which company in the world can compete with Tencent?"

If TME goes public at a higher valuation, Spotify could stand to make a lot of money.

Spotify is not in the business of investing

Spotify completed two separate equity transactions with Tencent back in December. One was a transaction where private investors converted $310 million worth of Spotify convertible notes into 4.8 million shares and subsequently sold those shares to Tencent. The other was a direct equity swap where TME and Spotify both issued shares to each other in exchange for minority stakes in one another.

In its F-1 Registration Statement filed in February, Spotify disclosed that it held a whopping 9% of TME (8.5 million shares) valued at 910 million euros ($1.07 billion) at the time. That was the most recent underlying valuation data point for TME, pointing to a valuation of 10.1 billion euros ($12 billion) when the shares were issued on Dec. 15.

If the value of those shares has more than doubled over the past six months, Spotify's balance sheet could get a nice little bump if/when TME goes public. It's worth noting that at 910 million euros, Spotify's stake in Tencent accounted for the entire long-term investment line item on its balance sheet. Spotify's first-quarter earnings release showed that it had already increased the carrying value of its long-term investments to 968 million euros ($1.13 billion).

While Tencent has enough money that it has been taking stakes in companies all around the world, Spotify is not in nearly as strong of a financial condition. The Swedish company has a lot it can learn from Tencent, but could also use some liquidity. Spotify is restricted from selling or transferring its shares until Dec. 15, 2020, but over time many companies tend to liquidate stakes in other companies if they're not in the business of investing and could use the cash. Spotify is in the music business.

TME going public would give Spotify greater liquidity if it wants to sell its shares in a few years, potentially with massive gains.