Earlier this year, the Nordstrom (NYSE:JWN) board of directors rejected an attempt by the founding family to take the storied retailer private. With Nordstrom's status as a public company now settled, management held an investor day on Tuesday to discuss the company's long-term strategy and financial targets.

Nordstrom's sales growth has slowed during the past few years, following a period of rapid gains between 2009 and 2015. The company expects top-line growth to remain fairly modest in the coming years. Nevertheless, Nordstrom is positioned for steady profit increases and double-digit growth in free cash flow per share between now and 2022.

A look at Nordstrom's customer strategy

In recent years, Nordstrom's leaders have highlighted the synergies between the company's four main sales channels: full-line stores, off-price Rack stores, full-line e-commerce, and off-price e-commerce. At the investor day, management elaborated on the value of this strategy. A customer who uses all four channels averages 13 times as many transactions and 11 times the spending of one who shops via only one channel.

Nordstrom executives also explained some newer initiatives during the investor day presentation. Most notably, the company plans to expand the local market strategy it is piloting in Los Angeles to other top markets, beginning with New York City.

In Los Angeles, Nordstrom has opened a small-format store called Nordstrom Local that functions as a service hub for try-ons, online order pickup, alterations, and personal stylist consultations (among other things). The store doesn't carry any dedicated inventory. The idea is to bring services that can't be replicated online closer to customers. Nordstrom recently announced that it will open two more Nordstrom Local locations in Los Angeles later this year, before expanding to New York in 2019. 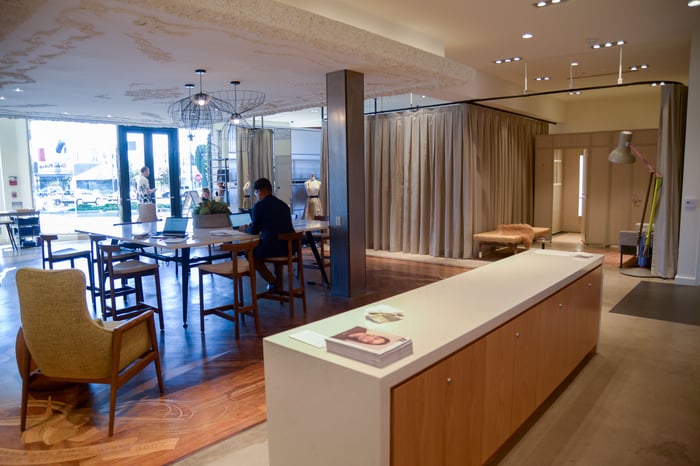 Nordstrom also revealed at the investor day that it will integrate the supply chains for its physical stores and e-commerce operations. This will allow it to improve full-line inventory allocation by holding more inventory in its distribution centers and less in its stores. The company also plans to expand its supply chain footprint to enable same-day or next-day deliveries for online orders in its biggest markets.

Management expects these initiatives -- along with Nordstrom's ongoing technology investments -- to enable revenue growth of 3% to 4% annually. That's modest compared to the high-single-digit annual revenue growth that Nordstrom was achieving just a few years ago, but well ahead of the 1% expected growth rate for the apparel and footwear market as a whole.

Nordstrom's operating margin has eroded dramatically over the past five years. The company is projecting some improvement going forward -- but not a lot.

Nordstrom posted an operating margin of 6.1% last year. It expects this operating margin to expand by 0.5 to 0.8 percentage points by 2022, as the company's recent investments and its local market strategy mature. This will power annualized operating profit growth of 5% to 6%.

This projected free cash flow growth is key to the investment case for Nordstrom stock. Rising free cash flow will enable Nordstrom to return substantial amounts of cash to shareholders during the next five years.

In fact, Nordstrom projects that it will spend a cumulative $1.3 billion on dividends and $3.7 billion on share repurchases between 2018 and 2022. For reference, Nordstrom's market cap is currently less than $9 billion.

This level of free cash flow production could drive Nordstrom stock to $100 -- or perhaps even higher -- by the end of 2022. Between now and then, shareholders will benefit from a healthy dividend that yields just shy of 3%. Thus, investors are poised for big gains if Nordstrom can hit its financial targets, even though the company's plan calls for fairly modest growth in sales and operating profit.