"I don't love absolutely everything about my wife, either, but on balance I love, like, 98%. That's a pretty good ratio, based on my previous relationships."

It's been a little over a year since Amazon acquired the organic grocer for $13.7 billion, and Amazon has aggressively moved to transform Whole Foods' business in that time. Though some Whole Foods suppliers, employees, and executives have balked at some of the e-commerce giant's moves, Amazon has generally improved sales at Whole Foods while cutting costs.

A big improvement in Whole Foods' operating health could be positive for all parties, especially Amazon shareholders, should these initiatives pan out. Here's the progress Amazon is making on turning Whole Foods around, along with some potential pitfalls. 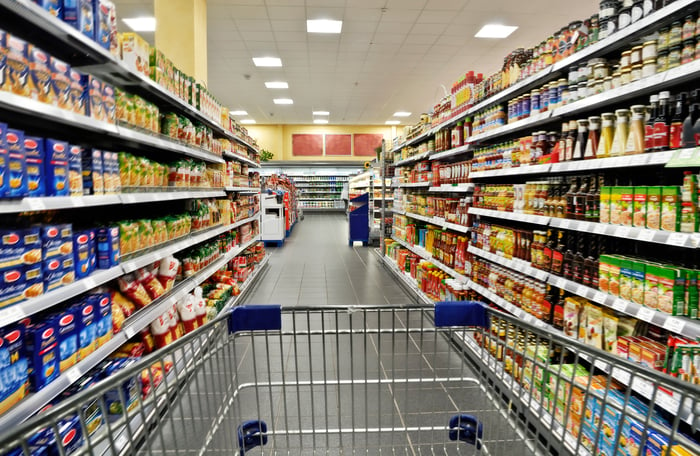 It starts with price

As soon as Amazon closed the deal last August, it slashed prices on select Whole Foods products, including bananas, kale, salmon, and almond butter, among other items. A few months later, Amazon pivoted to hiking the prices it charges suppliers in exchange for shelf space and end-cap promotions. Other fees included reorganization fees on larger suppliers of 3%, with beauty suppliers paying 5%. Amazon justified the moves by saying these fees would go toward promotional initiatives to drive further sales.

After the initial price cuts (to drive traffic), then the subsequent supplier fee hikes (to lower costs), Amazon went back to the well on traffic-driving initiatives, which were mostly tied to its Prime subscription program.

In February, Amazon rolled out one and two-hour delivery on Whole Foods groceries in select markets via Amazon's Prime Now program, which has since expanded to 14 cities. In mid-April, Amazon also began delivering groceries directly to people's cars via its new Amazon Key program.

After hiking the annual price of Prime by 20% at the end of April, another Prime-linked wave of discounts followed. Prime members, Amazon says, will now get 10% discounts on "hundreds, or even thousands" of items, as well as discounts that change week to week. On top of that, customers with the Amazon Rewards credit card through partner JPMorgan Chase will get an additional 5% off. These discounts are all in addition to the aforementioned 2017 cuts.

The efforts are especially geared toward the 40% of Whole Foods customers who aren't yet Prime members and could become another source to augment the 100 million people now in the program.

It appears these moves have been successful. According to research firm Second Measure, Amazon has been able to increase both traffic and overall sales, with same-store sales rising 3%, though sales per customer are down 1% (likely due to price cuts).

Not all are happy

There are some potential pitfalls to all these changes, however. A recent round of layoffs of in-store marketing personnel has sparked talk of unionization, and some suppliers have chosen to walk rather than pay the new fees. Amazon is also looking to centralize purchasing decisions, which will likely mean more layoffs.

While Mackey has voiced displeasure with some of these decisions, Whole Foods admitted the supplier-fee hikes and other moves had been in the works before the Amazon acquisition and that Amazon's increased sales volumes will help everyone come out on top. In addition, tech-enabled cost cuts aren't exactly unique to Whole Foods, especially these days.

If sales do continue to improve as they have, it's also difficult to see large suppliers pulling out of Whole Foods' nearly 500 stores in any significant way. Still, all these issues, especially the potential unionization efforts, are something to monitor.

Increasing traffic and cost-cutting (which filters down to suppliers) has been Amazon's playbook ever since it was founded. And it appears the company has been gradually and deliberately rolling out a similar plan over the past year at Whole Foods. With bigger discounts, faster delivery, and a nimbler organization, I'd expect Amazon's North American retail sales and operating profits to improve as Amazon continues to remake Whole Foods in its image.