Shares of beer brewing giant Molson Coors Brewing Co. (NYSE:TAP) have dropped 17% in 2018, according to data from S&P Global Market Intelligence, as the beer industry starts facing challenges on multiple fronts. Big beer used to be a stalwart of consumer goods, but the business just isn't what it used to be.

The first negative impact on beer producers is the 10% tariff the Trump administration has implemented on aluminum imports from Canada, China, and the European Union. Tariffs will raise costs for beer cans, and management says the impact will be shrinking margins and likely lower profits. 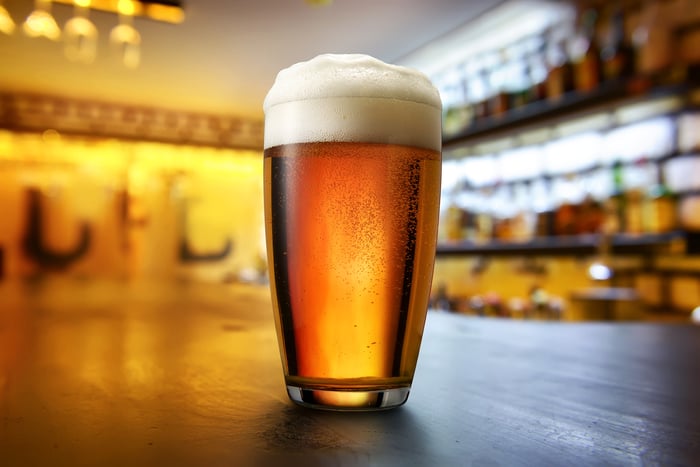 More importantly long-term, big beer brands are losing their luster with consumers. First-quarter volume for Molson Coors was down 3.1%, and there doesn't seem to be any reason to think the company's brands will turn around and become popular against a booming microbrewery business in the United States. In 2017, overall beer sales in the U.S. were down 1.2%, according to the Brewer's Association, but craft beer and import beers were up 5% and 3.2%, respectively, meaning big beer brands are losing market share at a rapid rate.

Consumers are trending away from Molson Coors brands, and there's not a lot the company can do to stop it. We're seeing small breweries pop up all over the country and take share away from their much bigger rivals, a trend that doesn't appear to be stopping anytime soon. That could make it tough for Molson Coors to recover, especially when the problem is compounded with rising input costs from tariffs. 2018 doesn't seem to be shaping up well in the big beer business, and I see no reason to jump on the dip in shares now.

Why Molson Coors Brewing Co.'s Shares Are Down 17.0% in 2018 @themotleyfool #stocks $TAP Next Article
Current