Snap Inc. (NYSE:SNAP) continues to struggle on the public markets. As of this writing, shares of the photo-messaging app trade 21% lower than the $17 at which the company priced its IPO in 2017. The stock continues to suffer on the back of a worse-than-expected first-quarter earnings report and continued analyst downgrades.

Snap's investment thesis was always predicated on growing revenue (and eventually earnings) at a rapid clip. To date, the company has underperformed lofty expectations. However, a potential partnership with e-commerce giant Amazon could be the catalyst to propel Snap shares higher. 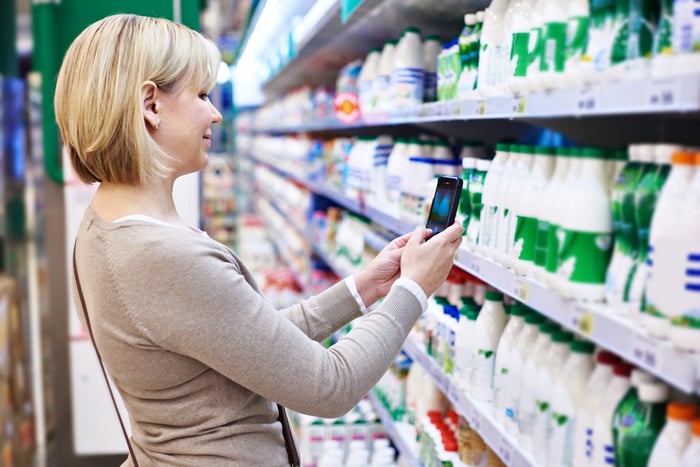 Shades of the Fire Phone?

According to a report from technology-focused site TechCrunch, there is a function called Visual Search now buried in Snapchat's Android app code. This function allows a user to take a picture of an object or bar code for direct purchase on Amazon. In effect, every picture taken via Snapchat becomes a potential marketing opportunity.

If the Visual Search technology sounds familiar, it's likely you remember Amazon's Fire Phone. Jeff Bezos' short-lived foray into smartphone hardware introduced a feature called Firefly that allowed smartphone users to use a picture to buy items through Amazon.

The company's desire was to transform the phone into a mobile shopping portal, growing e-commerce sales by simplifying the purchasing process.

While the phone was quickly discontinued, Firefly technology still exists on Amazon's Kindle Fire tablets. The apparent partnership with Snap appears to be using similar technology, but with an audience of 191 million daily users.

Snap's revenue growth has been mostly via ARPU

Snap's revenue growth is driven by two metrics: average revenue per user (ARPU) and average daily active users (DAU). Here's how the company has grown its top line over the prior four quarters.

Snap investors tend to focus solely on DAU growth. This is understandable as DAU growth is considered more sustainable, and marketers are willing to pay more for social media companies with more users.

Unfortunately, this figure has slowed considerably as concerns about the app redesign have taken their toll. Last quarter, the company reported 191 million DAUs, only 15% growth from the year-ago quarter and 2.1% growth sequentially.

As the chart shows, the bulk of Snap's revenue growth has been via ARPU increases. A potential partnership with Amazon could significantly increase this revenue-per-user figure.

User-generated searches could be a game changer

The brilliance in Visual Search is that it's not the traditional display advertisement that most digital media companies use, but rather a search/query advertisement like Alphabet's. The latter is more valuable on an engagement basis, which makes sense because search is user-generated. For example, Google's AdWords can charge upward of $5 per click for some results.

While it's likely Snap searches won't be as expensive, a successful program should quickly increase Snap's ARPU, which was $1.21 for the entire 2018 first quarter. If this relationship with Amazon works out, it could be quite lucrative for Snap.

It's early, but this could be a game changer for Snap stock. Investors should watch Snap's Visual Search program closely. Any signs of significant adoption from Snap's users could change the stock's negative trajectory.