DigiTimes, citing South Korean newspaper Chosun Ilbo, said that Samsung (NASDAQOTH: SSNLF) is set to spend $9 billion on capital expenditures related to NAND flash memory manufacturing in 2019. This figure, the report says, is an increase from the roughly $6.4 billion it will spend in 2018.

First, let's go over capital expenditure basics so that you know what this means broadly. Then, I'll try to explain what it means for investors in Samsung, as well as other NAND flash memory makers. 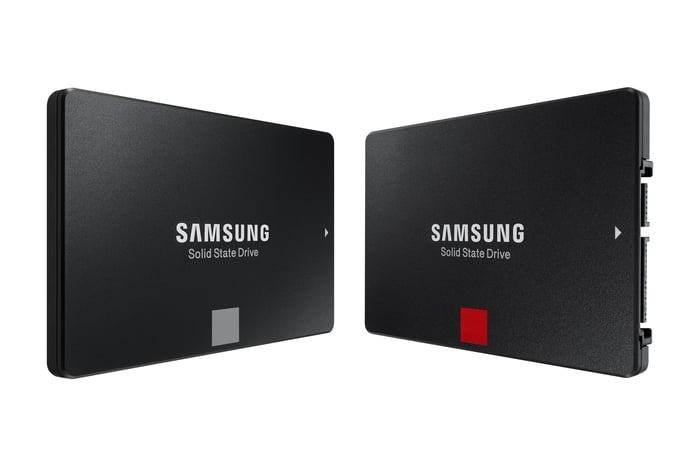 Manufacturing memory chips requires companies to invest substantial amounts of money up front in factories and equipment. Broadly speaking, the more that a company spends on capital expenditures, the more manufacturing capacity they're ultimately putting in.

So, Samsung reportedly upping its NAND flash capital expenditure for 2019 to $9 billion from $6.4 billion in 2018 means that the company aims to bring more NAND flash manufacturing capacity online. This essentially tells us that Samsung expects demand to grow significantly.

On the surface, that sounds good, right? Well, not so fast.

The risk of oversupply

DigiTimes cited analysts with IC Insights, who "warned of overspending by major NAND suppliers in a recent analysis." In fact, they reportedly observed that NAND flash pricing has come down in early 2018, and that those price declines could accelerate during the second half and persist through next year.

The problem is that Samsung isn't the only company boosting its NAND flash production capacity to supply the expected higher demand. The major manufacturers apparently "all plan to ramp up dramatically their 3D NAND flash capacities over the next couple of years," according to DigiTimes.

The report then goes on say that IC Insights "believes that the risk for significantly overshooting 3D NAND flash market demand is very high and growing."

Oversupply is a bad thing for suppliers

In a situation where there's more installed NAND flash memory capacity than there is demand at current prices, market forces dictate that NAND flash pricing will come down. What generally doesn't happen in this space is suppliers cutting production significantly.

The reason is simple. All of them are spending a ton of money to build manufacturing capacity, and they want to keep their factories running at high utilization rates. (Low utilization rates reduce margins significantly.) So, instead of easing off on production and dealing with the financial impact of low factory utilization, they start cutting prices to spur demand for their products.

Lowering pricing is also deleterious to gross profit margins, but it can often be the lesser of two evils. In either case, though, net profits come down.

This risk of oversupply is precisely why memory makers need to be mindful of both the overall demand environment as well as what competitors might do to meet it when deciding how much capacity to put in.

While a NAND oversupply is something that manufacturers dread, it's something that their customers will enjoy. NAND flash is used in many applications, from data centers to smartphones, so lower prices mean better margins for their products.

For example, one company that's probably excited about a ton of NAND flash capacity being installed is Apple (NASDAQ:AAPL)--  it buys substantial quantities of NAND flash for its iPhones, iPads, Macs, and other products.

"We feel that for NAND [flash], we're going to be turning the corner very soon ," Apple CFO Luca Maestri said on the company's earnings call back in May.

You can bet that Apple's peers, as well as many other companies, would be glad to see NAND flash prices continue to soften.