Earlier this year, Samsung (NASDAQOTH: SSNLF) announced the Galaxy S9 and Galaxy S9 Plus smartphones, the latest entries in its flagship Galaxy S-series of smartphones.

The devices received positive reviews from many in the tech press. Tom's Guide called them "the Android phones to beat," and The Verge praised the phones for having a "head-turning design, fast performance, a great screen, and a very good camera." 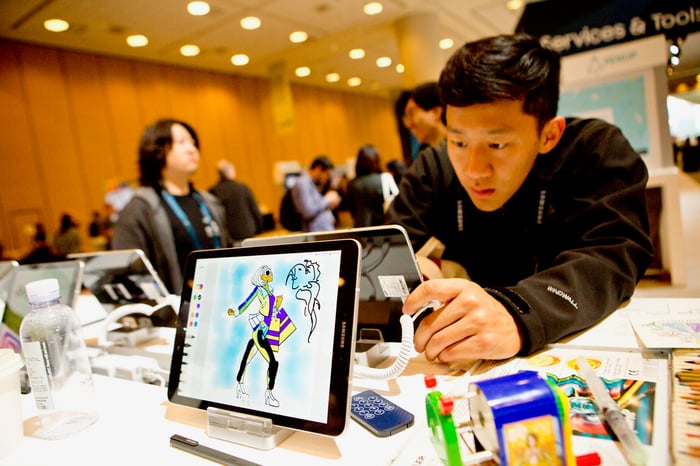 Despite the fact that Samsung seems to have built an objectively good pair of smartphones, it looks like they haven't sold anywhere near as well as Samsung had hoped -- something that initial orders seemed to hint at.

According to one analyst cited by The Wall Street Journal, Lee Seung-woo with Eugene Investment and Securities, Samsung is set to ship just 31 million units of its Galaxy S9 and S9 Plus smartphones during calendar year 2018.

"That would mark a dramatic decline from just two years ago, when the Galaxy S7 became Samsung's best-selling phone ever, with roughly 50 million shipments," The Wall Street Journal reported.

Although in absolute terms, selling 31 million high-priced smartphones in the span of nine months or so is hardly a death knell for Samsung's mobile business, nonetheless it's a negative data point that investors should probably pay attention to.

At this point, trying to figure out why the Galaxy S9 is set to dramatically underperform previous models requires some educated guesswork. There are several things that could be going on.

The market for ultra-premium Android-based smartphones may simply be on the decline, particularly as high-end and midrange Android smartphones become more feature-rich. Samsung itself offers such devices in its broad portfolio of smartphones.

Moreover, within the premium Android smartphone market, competition continues to intensify, particularly from China-based smartphone vendors. So, not only could the premium portion of the market be shrinking, but the competition for that smaller overall business is getting fiercer.

On top of that, Samsung had to contend with Apple's (NASDAQ:AAPL) iPhone X, which was arguably a more competitive offering from Apple in terms of aesthetics than the iPhones that the Galaxy S7 and S8 had to compete with.

And finally, one complaint I've seen is that the Galaxy S9-series devices were simply incremental upgrades compared to their predecessors, rather than radical redesigns. That could be a factor, too.

While Samsung's flagship smartphones get a lot of attention from consumers and the news media, there are two realities that investors should be aware of.

The first is that Samsung's mobile business doesn't depend entirely on flagship smartphone sales. In fact, most of the more than 300 million smartphones that Samsung ships per year aren't in its flagship Galaxy S-line, but include high-end phones, midrange phones, and even very low-end devices. Samsung's mobile business still sells feature phones, too.

The second is that Samsung Electronics, of which Samsung Mobile is just one business unit, generates most of its profit these days from sales of chips -- in particular, memory chips.

Putting some numbers to these qualitative claims, during Samsung's fiscal year 2017, the company generated roughly $47 billion in operating profit, with nearly 66% of that profit coming from its memory business. More than 75% of the company's operating profit came from its overall chip business, which includes the memory business as well as other things like image sensors and contract chip manufacturing.

So, from the perspective of Samsung stock, the Galaxy S9-series apparently falling short of expectations isn't great, but it's not necessarily a reason to sell or short the shares. There's simply more to consider before making an investment decision one way or another.