Anybody who's invested even $100 in the market will tell you that stock prices will go up and stock prices will go down, sometimes with little rhyme or reason. Owning dividend stocks can help protect you from that instability. Not only are they shares of generally more stable companies with proven competitive advantages, but they also provide guaranteed quarterly income to shareholders. Investors looking for solid dividend stocks should consider Williams-Sonoma (NYSE:WSM) and 3M Company (NYSE:MMM).

Home furnishings retailer Williams-Sonoma boasts a strong management team that's committed to returning capital to shareholders. In March, management announced a 10% increase in the company's quarterly cash dividend to $0.43 per share, for a robust dividend yield of 3.58%. In addition, the board of directors increased the total available for stock repurchases under its current repurchase program to $500 million. When a company is committed to returning long-term value through increasing dividends, while also repurchasing shares consistently, it forms a beautiful X when graphed: 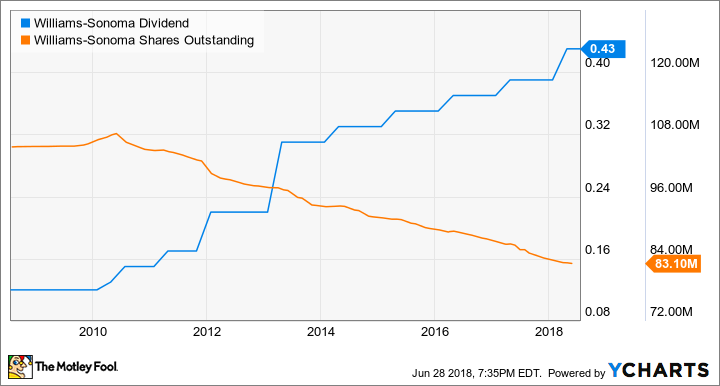 Some investors don't love the idea of share repurchases, but since the beginning of 2016 shares have been undervalued, in my opinion, and continue to trade at a 9% discount to Morningstar.com's fair value estimate -- suggesting these have been good buybacks in recent years. Retailers of any kind have struggled with convincing Wall Street to buy in when there isn't a strong e-commerce story; that's just the retail world in 2018. But with brand names such as Pottery Barn and West Elm, among others, Williams-Sonoma has an incredible e-commerce story.

Just how incredible? During the first quarter, the company's e-commerce net revenue growth was over 11%, and generated nearly 54% of total net revenue. Growth of 11% in e-commerce revenue is impressive, but its 25% compound annual growth rate (CAGR) since 2000 is even more impressive. In fact, Williams-Sonoma ranked as the 23rd largest internet retailer in the U.S. last year, battling near the top of a list of hundreds that include juggernauts such as Amazon, Apple, and Walmart. 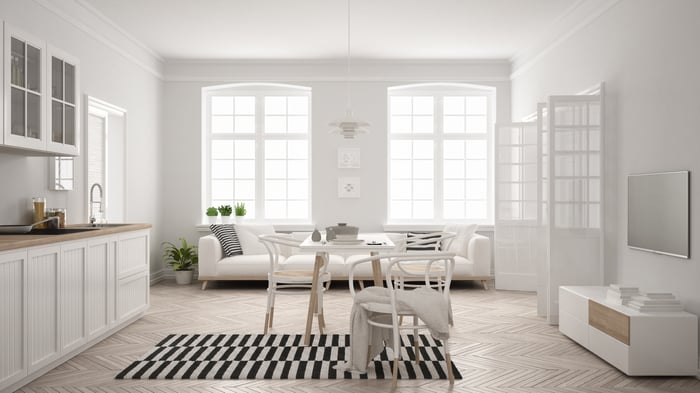 Williams-Sonoma is doing well in the U.S., but why stop there? During the company's investor presentation on April 13, management noted it only had 128 selling locations internationally, generating a meager 6% of total company revenue. But there's a $350 billion addressable market internationally; management is anxious to expand aggressively, and has already identified market opportunities across six continents. Expect the international story to expand consistently over the next decade or so; it could one day be a lucrative part of the company's overall business.

Williams-Sonoma has the elusive e-commerce success many retailers are desperately trying to create, and it consistently returns value to shareholders through increasing dividends and repurchasing shares. If you're looking for a solid dividend stock with upside, consider digging into Williams-Sonoma.

3M is a diversified industrials business operating in the industrial, healthcare, safety and graphics, consumer products, and electronics and energy businesses. It may be best known for its focus on research and development to generate truly innovative products. Many companies claim to be "innovative," and it's an overused buzzword these days, but 3M has proven to be so. Morningstar forecasts the company will generate almost $9 in gross profit for every dollar of R&D, which it says exceeds other highly innovative companies by 57%, historically.

As investors generally find with dividend stocks, successful R&D is a key piece of the company's durable competitive advantage. 3M increased its quarterly dividend 16% in January 2018, to $1.36 per share, for a 2.75% yield. That marks the 60th consecutive year of dividend increases, and 3M has paid dividends uninterrupted for over a century. When you combine that with its share buybacks over the years -- 3M repurchased roughly $16.7 billion in shares from 2014 through 2017 alone -- it forms a compelling graphic of shareholder value being consistently returned: 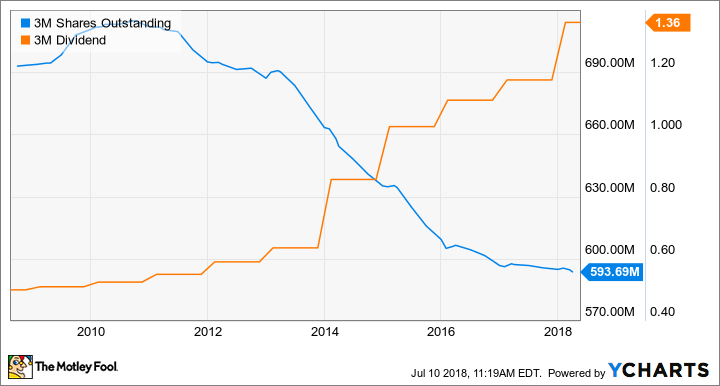 Investors could argue that cash could be better spent in ways other than share repurchases, but the company is a cash printing machine, still spends plenty on research & development to drive innovation, and still has cash leftover to increase its dividend sharply since 2014 -- so reducing its sharecount seems like a good move for investors, for now. 3M's management has highlighted a list of growth priorities. These include automotive electrification, advanced wound care, data centers, connected safety, and four other segments that combine for an addressable market of over $30 billion. Healthcare and automotive electrification could become a major factor in 3M's growth story. Healthcare businesses should benefit from an aging population and increased medical data storage and regulation, and automotive electrification could explode in importance as the world drives toward autonomous and electric vehicles.

Williams-Sonoma and 3M are very different companies, but one thing they have in common is their ability to consistently return value to shareholders through increased dividends and share buybacks. If that's something you're looking for, X marks the spot for these two companies.