The Dow Jones Industrial Average (DJINDICES:^DJI) is one of the most widely followed stock market benchmarks in the world. One of the reasons it has been so popular over time is that it combines simplicity with effectiveness, doing a good job of tracking more comprehensive stock indexes while sticking to a select list of 30 of the most successful U.S. companies.

Stability has been an essential characteristic for the Dow. While other stock indexes switch stocks in and out regularly, changes to the Dow are few and far between. The decision to replace General Electric with Walgreens Boots Alliance was the first substitution made by S&P Dow Jones Indices since 2015, and when you go back to the beginning of the Dow's history in 1896, the average has made changes on only 50 different occasions, some of which involved multiple stocks getting moved in and out of the average.

Since the Dow expanded to cover 30 stocks in 1928, there have been roughly five dozen stocks replaced in the average. But as you can see below, during much of the 20th century, switches were few and far between, concentrated largely during periods of economic uncertainty. 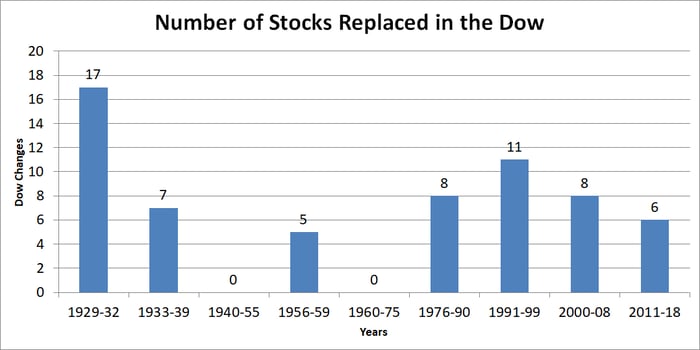 More recently, though, the overseers of the Dow have made replacements on a more regular basis. There hasn't been a five-year gap between Dow changes since the 1990s, and the average has responded more quickly to changing economic conditions. For instance, the tech boom in the late 1990s prompted the Dow to increase its membership of technology stocks dramatically. The Great Recession of 2008 and its aftermath also led to major changes to reflect the struggles in the financial and industrial sectors, including the removal of well-known companies like General Motors and Citigroup.

Investors will keep following the Dow, and membership will remain a valuable distinction for the companies among the 30 Dow stocks. Even with slightly more frequent changes recently, the Dow is still a stalwart among those looking for reliable blue chip stocks with proven track records of excellence.

A Foolish Take: How Often Do Dow Stocks Get Replaced? @themotleyfool #stocks $^DJI Next Article
Current