There was a lot to like when Intuitive Surgical (NASDAQ:ISRG) reported financial results for the 2018 second quarter. Revenue of $909 million increased 20% year over year, beating analysts' consensus estimates of $876 million. Adjusted earnings per share of $2.76 grew 38% compared to the prior-year quarter, beating expectations of $2.50 per share. The company shipped 220 da Vinci surgical systems during the quarter, growing its installed base to more than 4,500 worldwide, and the number of surgical procedures performed increased by 18% compared to the year-ago quarter.

While the company reported all the usual metrics in its earnings release, Intuitive Surgical revealed much more on the conference call to discuss the results with investors. 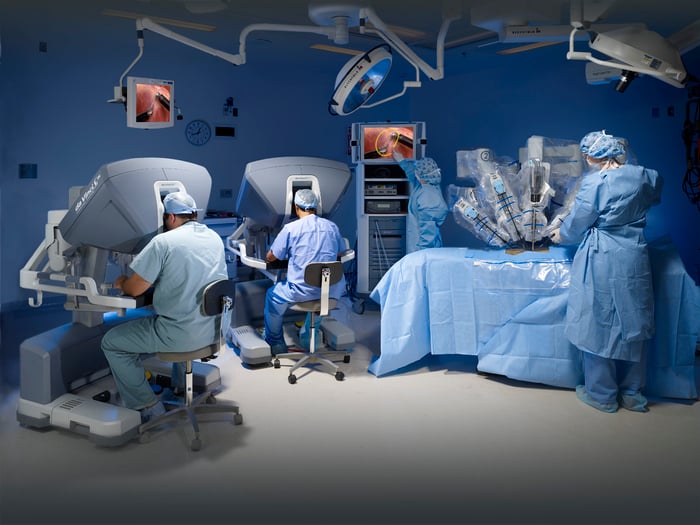 Offsetting the lumpiness of system sales

One of the historical challenges of being an investor in Intuitive Surgical has been the inability to predict sales of the company's flagship da Vinci Surgical systems. The company eluded to that during its conference call, saying: "It's hard to predict capital given budget cycles, given government regulations, in the case of China, and just seasonality. And so it's just hard to predict when hospitals will actually purchase ... capital placements have historically been lumpy and we anticipate volatility in placements for the remainder of 2018."

Over the past decade, however, the recurring revenue resulting from instrument and accessory sales and service revenue have grown to represent more than 70% of the company's total revenue, lessening some of the peaks and valleys caused by "lumpy" system sales. The subject of competition has been coming up more frequently in recent conference calls, highlighting the increasing encroachment on what has long been a near monopoly for Intuitive Surgical. CEO Gary Guthart again acknowledged the growing competitive threat saying: "As our approach to surgery has gained traction, organizations large and small are hurrying to participate in the market. Their entry is an inevitable reaction to positive change in the operating room ... so we're not surprised to see others' interest in it."

While the company is mindful of competition, it believes that its long history of research and development, nearly two decades of experience in the field, and strong relationships with the surgical community provide an unmatched competitive advantage. "We believe this sets a high bar for new entrants in the eyes of the thousands of surgeons who use da Vinci weekly," Guthart said.

Intuitive Surgical has a long history of innovation and has continually sought to improve the capabilities of its surgical robot. The company pointed to the recently expanded usages for its single-port da Vinci SP. "We obtained FDA [Food and Drug Administration] clearance for our da Vinci SP surgical system for neurologic surgical procedures in [the second quarter of] this year, and we are finalizing our transoral clinical investigational device exemption (IDE) for SP this quarter." The IDE process allows surgeons to use the device while collecting clinical data for evaluation.

The company is continuing to develop its flexible robotics platform, a process it began nearly two years ago, to develop a tool for use in helping to diagnose and potentially treat lung cancer. Intuitive Surgical is planning to submit data to the FDA later this year to show that the device is safe and effective for obtaining small samples of lung tissue from difficult-to-reach places -- enabling earlier detection and treatment of lung cancer.

These discussions show that Intuitive Surgical is well-positioned to continue its winning ways, both operationally and financially. The company plans to meet the threat of increasing competition by continuing to innovate and develop new solutions and expanding the existing applications of its devices in collaboration with the surgical community.

In the long run, this will serve investors well.