You might have expected Vertex Pharmaceuticals (NASDAQ:VRTX) stock to soar after the biotech reported blow-out second-quarter results after the market closed Wednesday. But that's not what happened. Vertex's share price actually dropped a little on Thursday.

Keep in mind that Vertex reported a 46% year-over-year revenue increase. The company's adjusted earnings skyrocketed 147%. Everything about the Q2 results looked great. So why in the world didn't the stock at least jump a little?

One potential answer to that question is that the biotech's Q2 growth had already been priced into its shares, to the point that its stock is now overvalued. With Vertex shares trading at a forward earnings multiple of 37.5, earnings growth of nearly 150% apparently wasn't enough to move the needle. In my view, though, Vertex stock isn't nearly as expensive as it looks. Here are three reasons why. 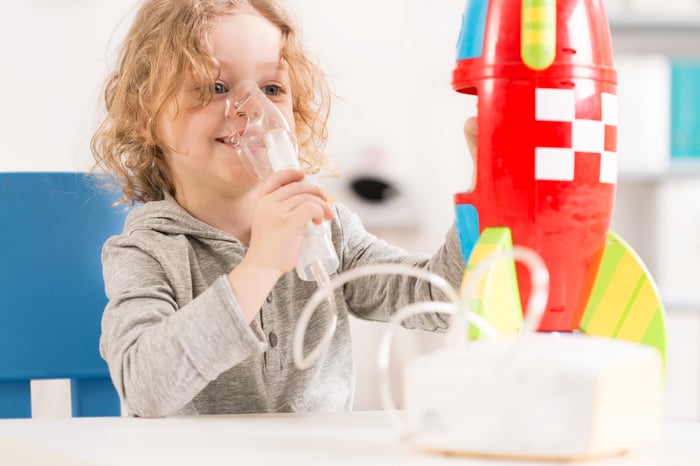 While I get why some investors might think that Vertex's growth prospects are already baked into its share price, I don't agree with that perspective. You can't look only at the earnings growth expected in the next year (which the forward earnings multiple does). Instead, try to understand the biotech's growth trajectory coming in the long run.

Vertex achieved its stellar revenue and earnings growth in Q2 largely because of the successful launch of Symdeko, its latest two-drug combination for treating cystic fibrosis (CF). Of course, we can't leave out continued solid sales for the company's other CF drugs, Kalydeco and Orkambi. But the maximum size of the market for those three drugs is 45,000 CF patients -- 60% of the total number worldwide.

The company isn't reaching all 45,000 of those patients yet. For example, it's still negotiating with the U.K. on reimbursement for Orkambi. Sweden finalized reimbursement for Orkambi in June. Also, the biotech is awaiting regulatory approvals for both Kalydeco and Orkambi as treatments for younger patients. So there's a lot of potential growth available for the company just with its current three CF drugs.

But the bigger opportunity lies with Vertex's triple-drug combos. CEO Jeff Leiden stated in the company's Q2 conference call that the phase 3 studies of combos based on its VX-659 and VX-445 treatment candidates "have moved exceptionally fast." He said that Vertex expects to be able to submit a triple-drug combo for approval by mid-2019. If approved, these combos should expand the biotech's addressable market by 55%. Again, the forward earnings multiple simply doesn't factor in this growth potential.

2. An underappreciated pipeline outside of CF

Even if all Vertex had was its current CF drugs and pipeline candidates, the stock valuation wouldn't be as expensive as it might seem. But the company also claims several other candidates in its pipeline targeting other diseases.

One candidate to keep your eyes on is VX-150. Vertex has already seen encouraging data from phase 2 clinical studies of the drug in treating acute pain and chronic inflammatory pain. The company expects to report results from another phase 2 study of VX-150 in treating neuropathic pain in early 2019.

Another key pipeline candidate is CTX001, a gene-editing treatment that Vertex is co-developing with CRISPR Therapeutics (NASDAQ:CRSP). Although the FDA placed a clinical hold on the application to begin clinical testing of CTX001 as a treatment for sickle cell disease, Leiden said that Vertex and CRISPR are working together to answer the agency's questions. He added that he thought the FDA was being "appropriately cautious and conservative" with what could be the first CRISPR-Cas9 gene-editing treatment candidate outside of cancer to advance to human trials.

In the meantime, it appears to be full steam ahead for Vertex and CRISPR Therapeutics to begin a phase 1 clinical study of CTX001 in Europe for the treatment of the rare blood disorder beta-thalassemia. The two companies received approval for a clinical trial in the U.K. earlier this year, and recently obtained a go-ahead in Canada.

3. A capacity to make deals

Finally, Vertex's current valuation doesn't reflect the company's ample capacity -- and eagerness -- to make deals to build up its pipeline. As of the end of the second quarter, Vertex had cash, cash equivalents, and marketable securities totaling nearly $2.8 billion.

On the call, Leiden said that while Vertex didn't need to buy short-term revenue, it definitely wants to add to its pipeline. Chief Operating Officer Ian Smith added that the company is "more active than we've ever been" in looking at potential business development transactions. He listed external CF programs and early-stage assets outside of CF as top priorities on the radar.

I think that Vertex is in great shape to follow a path similar to the ones that today's biggest biotechs have taken. All of the industry's leaders started by carving out a niche in one area. They then used the cash generated by their initial successes to expand into new therapeutic categories.

In the wake of Galapagos' announcement of disappointing results from its phase 2 trial for C2 corrector GLPG2737 in treating CF, Vertex's competitive advantage in the CF market appears stronger than ever. Its domination of that market seems likely to continue for years to come, providing it with a financial springboard from which to achieve success in other indications.

Considering its long-term prospects, I view Vertex as a reasonably good bargain right now. I suspect after a few more stellar quarters like Q2, Wall Street will wake up and notice this jewel of a stock.