About a year ago, Danaher Corporation's (NYSE:DHR) valuation looked cheap relative to its peers. Of course, when I write peers, I mean its medical, life sciences, and diagnostics peers because after the spinoff of Fortive Corp (NYSE:FTV), which largely comprised of Danaher's industrial businesses, some 78% of the company's sales now come from the medical market.

A year later, the valuation discount has narrowed, thanks to a combination of a near 20% rise in the stock price and good earnings growth. And there could be more to come. Here's why. 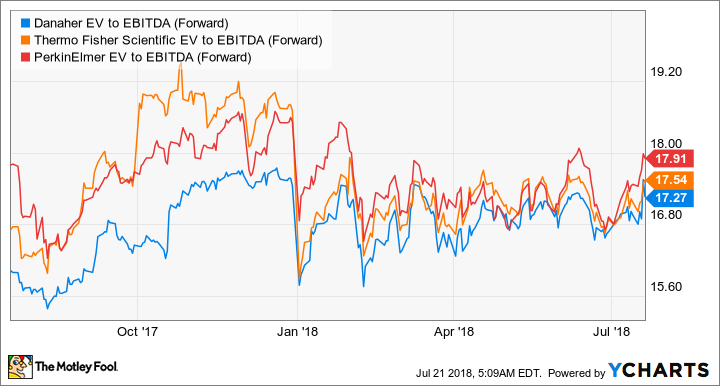 Why the Fortive split means Danaher should trade higher

Life sciences and diagnostics companies tend to trade on higher valuation multiples than industrial companies because the latter has more cyclical earnings. Danaher is a good example of a relatively safe stock with good growth prospects, so there's no reason why Danaher's valuation multiple can't move up in line with the likes of Thermo Fisher Scientific or PerkinElmer.

Danaher almost has closed the valuation gap, but it's arguably been held back by a poorly performing dental segment. As you can see in the chart below, dental has been a clear laggard in terms of revenue growth in the last couple of years. In case you're wondering, Danaher is a highly acquisitive company so it's better to focus on organic growth (excluding acquisitions and foreign currency effects) trends in its sales. 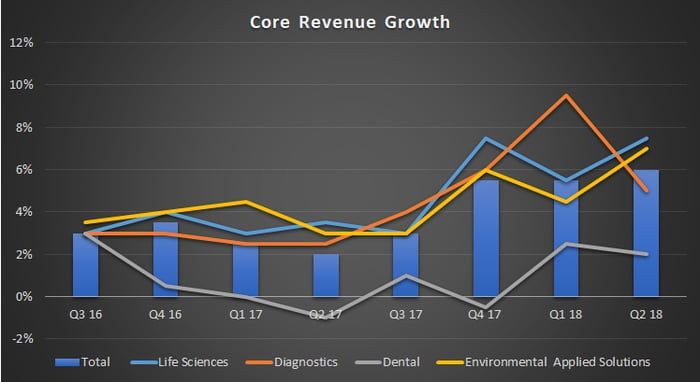 Moreover, it's a similar story when you look at margin performance. Here again, the dental segment has performed more weakly than the others. The environmental applied solutions (EAS) business margin has declined in recent quarters, but this was because of what CEO Tom Joyce described during the earnings call as "accelerated growth investments and productivity initiatives across the platform." You can see the positive results on this in the EAS core revenue growth line in the chart above. 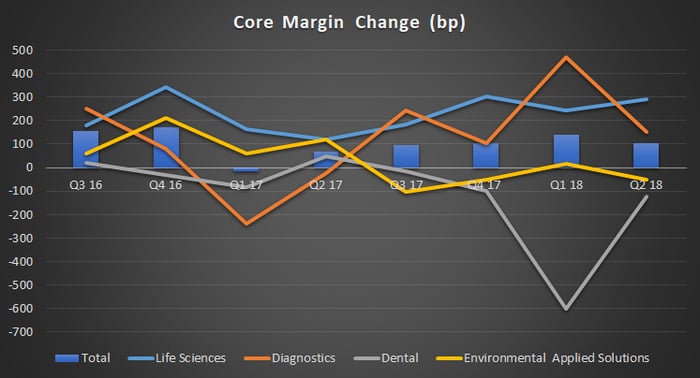 In a nutshell, the dental segment has suffered from weak end markets. Indeed, Joyce pointed out that "our traditional consumables and equipment business grew for the first time since 2016" in the second quarter. It's a problem that's also afflicted 3M Company in the last couple of years -- 3M's healthcare segment has underperformed its medium-term growth targets, partly due to its dental exposure.

There are three key arguments why a spinoff of the dental segment makes sense.

Second, the remaining parts of Danaher are growing strongly and have a significant amount of recurring revenue from consumables sales, so they have similar investment profiles. Dental is the odd man out.

Finally, Fortive's stock is up more than 80% since its spinoff, and investors will be hoping the dental segment can similarly release value for investors.

If there's a worry, it comes from the fact that dental is performing so poorly that Danaher shareholders might not get such a good deal from the spinoff. Joyce answered a question on the matter from JPMorgan analyst Tycho Petersen and claimed: "In addition, I think from a market perspective, the dental market has clearly begun to stabilize. We think a year from now it will be in an even better place."

There's plenty of time between now and the second half of 2019, so Joyce's confidence will hopefully be borne out in forthcoming quarters. It's a good idea to keep an eye out for what companies like 3M and Dentsply Sirona are saying about the dental equipment and consumables market.

If the dental spinoff takes place in a period when Danaher's end markets are growing again, and the separation can accelerate growth in both companies, then Danaher's valuation and stock price are likely to improve. Moreover, there's still a bit of a valuation discount between Danaher and its peers, and that could close, too.

Meanwhile, spinning off the dental segment will make the overall investment proposition much clearer at Danaher. All told, it's a good move and should be welcomed by shareholders.