On the face of it, saying that JD.com (NASDAQ:JD) is a better growth stock than Alibaba (NYSE:BABA) is patently absurd.

Alibaba is valued at nine times the size of JD, owns a much bigger slice of the rapidly growing Chinese e-commerce market, sells more than three times as much stuff (as measured by gross merchandise volume, or GMV), and has a net cash position over four times larger than JD's. These all give Alibaba the upper hand for future growth prospects.

Then, of course, there's the simple fact that Alibaba's stock has behaved much more like a growth stock than JD's over the past three years. 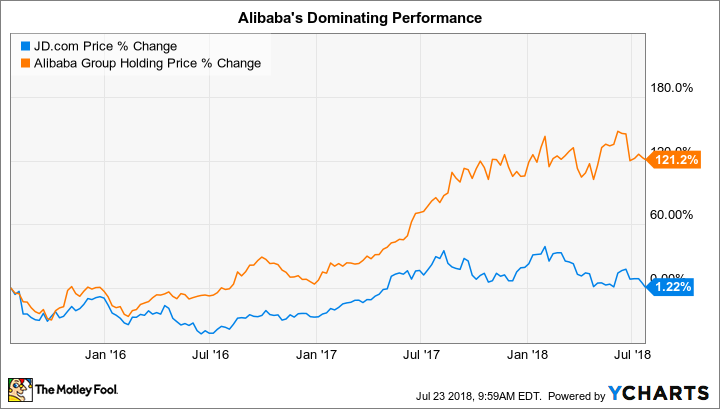 Despite this, I still think JD is a better bet for growth investors moving forward. The company is building a business with a wider competitive moat, and has much more room to grow into a favorable valuation versus Alibaba.

Smaller in size, but laden with potential

I'm not going to argue that JD is currently a more powerful force than Alibaba. But in the stock market, what the future holds is much more important than what's happened in the past. In this respect, JD's small size is actually an advantage, because the company has much more room to grow than Alibaba. 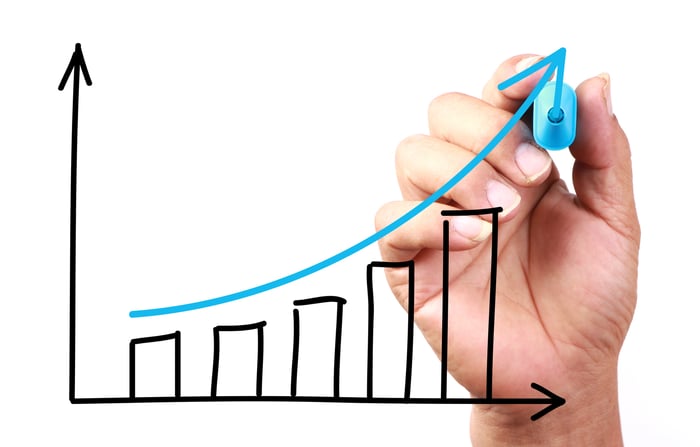 Here's what I mean: If we look at absolute values, we'd see that Alibaba is much bigger than JD. Its annual gross merchandise volume (GMV) of 4.8 trillion yuan far exceeds JD's 1.3 trillion yuan.

But if we measure growth trajectories between fiscal 2013 and fiscal 2017, we see that JD is moving at a much faster clip. The bold and italicized sections show the compound annual growth rate (CAGR) for each metric.

It should be noted that JD actually has higher sales than Alibaba. On the surface that might be surprising, but -- as I'll explain below -- Alibaba enjoys much wider profit margins than JD right now.

The important thing to note here is that while JD is growing much faster than Alibaba, each stock's price tag doesn't reflect this difference. Alibaba trades for 33 times its 2017 free cash flow figures, while JD trades for 26 times its own 2017 figure. If Alibaba were growing at a similar pace, this valuation would make sense. But it's not -- JD is growing much faster, even though it is making massive capital investments. That creates an opportunity for growth investors.

Nothing is more important than the moat

But none of the above matters without moats. The fact that JD has been able to capture market share is nice. But the discrepancy in GMV shows that JD still drives a fraction of Alibaba's volume. It's plausible that once JD grew to be a real threat to Alibaba, the latter could simply steal all of the former's business away.

But that's where a key distinction between these two -- and their moats -- arises. Historically, Alibaba has simply provided a platform for people to sell merchandise. It wasn't in charge of warehousing, manufacturing, or sending anything sold on its site. It just provided a way for people to meet, buy, and sell things.

Over the medium term, this was a very wise choice. By becoming the go-to website for e-commerce in China, the company's Taobao subsidiary benefited from powerful network effects. And because it utilized a capital-light business model, Alibaba was enormously profitable from the get-go.

JD, on the other hand, took the exact opposite approach. It spent years building out an expensive network of fulfillment centers throughout China, with 468 currently spread throughout the country. It warehouses much of its merchandise and owns the complete delivery chain -- from long-haul shipping to last-mile delivery. JD is nowhere near as profitable -- based on profit margins -- as Alibaba.

This is somewhat of an oversimplification -- Alibaba has moved into logistics and has other lines of quickly growing business -- but it highlights the overarching difference between these two companies.

Here's why I believe JD will eventually outshine Alibaba -- both in terms of its stock performance moving forward and on an absolute GMV basis: JD's fulfillment network not only gives it a lower internal cost of guaranteeing two-day delivery, but its control over inventory helps combat counterfeit goods, which is a major problem in China.

Think about it for a second: if you had to choose between buying on Alibaba or JD -- and you were more confident in the quality of your goods and timeliness of your delivery from JD -- why wouldn't you choose JD? Of course, the answer is more complicated than that (Alibaba has a popular payment option that lures customers in, for instance). But over a decade-long time frame, I believe the scales are tipped in JD's favor. Sure, the company will have lower profitability, but it will also have the more enticing value proposition for customers. Over the long run, that means stealing market share from Alibaba.

For its part, Alibaba has realized the emerging dynamics and invested in its own logistics and fulfillment solutions, but I don't think the company will be able to match JD's scale. And even when it does, it's not an area of expertise for Alibaba. JD has been squarely focused on fulfillment from day one.

In fact, if you could sum up the reason why I believe JD is a better growth stock than Alibaba in one word, "fulfillment" would be it. That's why I own shares of JD, but not Alibaba -- and why I have an outperform rating for the former, and an underperform for the latter on my CAPS profile.

If you're looking to invest in the future of China's e-commerce, JD is a better bet at today's prices.