Harley-Davidson's (NYSE:HOG) earnings are not as good as the market seems to think. Simply because the motorcycle maker beat Wall Street's pessimistic forecast doesn't mean it pulled out of the dangerous slide it was in.

In fact, this was actually a terrible quarter for Harley-Davidson because the second quarter is the bike maker's biggest quarter of the year. When the warm weather hits, riders want to go out and hit the road, and historically they've flocked to Harley dealers during the months of April, May, and June to buy a motorcycle.

This year, Harley sold only 46,490 motorcycles in the U.S. during that period. That's the fewest number since the second quarter of 2009 when the markets were still in the pit of the Great Recession and only 35,000 bikes were sold. That's not a performance to get excited over. 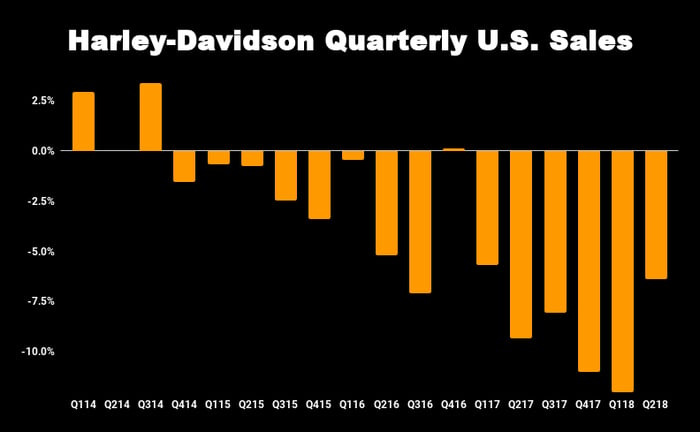 Whatever Harley-Davidson says about wanting to increase international sales so they account for half of its volume is fine as a goal, but right now the U.S. remains its biggest, most important market, representing 59% of sales. If it's only able to achieve international parity because its U.S. business is in freefall, that is no achievement at all.

U.S. sales fell 6.4% this quarter, which was in line with the overall motorcycle market's 6.3% drop. Certainly, it's better than the 12% decline Harley experienced in the first quarter, but it is still a demonstrably weak performance.

In contrast, Polaris Industries (NYSE:PII) just reported it's earnings, and despite not being nearly as transparent as Harley about how many motorcycles it sells, it says retail sales of its Indian Motorcycle brand actually rose by low single-digit percentages.

Yet the international markets aren't exactly robust, either, with sales rising just 0.7% in the period. Put another way, Harley-Davidson sold 218 more motorcycles abroad than it did a year ago. At least it's gaining ground, but that's hardly the stuff of dramatic change that will power global markets.

Last quarter Harley teased a big announcement where it would unveil its strategy for the future. Among the goals it wants to attain are the previously mentioned international sales becoming 50% of its total, bringing in 2 million new riders to the Harley brand, and producing 100 new motorcycle models in 10 years. 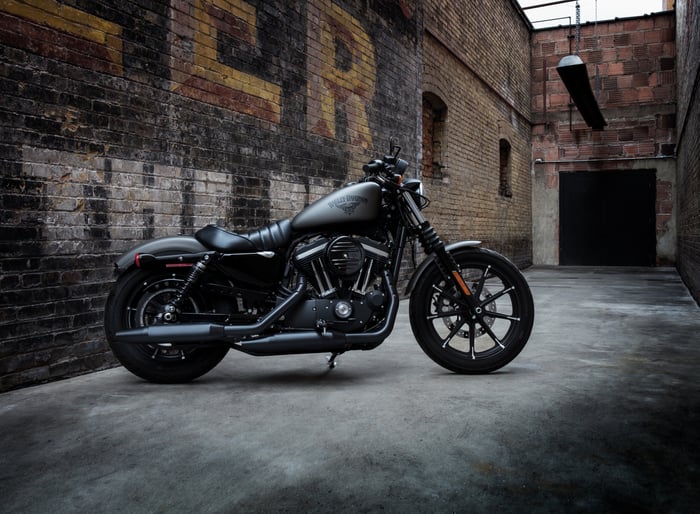 Although many people expected Harley to make the presentation alongside its earnings report, the bike maker chose instead to have a second event on July 30 dedicated to revealing the initiative. It's going to have to be an eye-popping spectacle if it really wants to change opinions, because so far Harley-Davidson's efforts to achieve all of those goals have been muted at best. And now it has to do so in a dicey trade environment.

It is facing increased costs both abroad and in the U.S. after President Donald Trump imposed tariffs on imported steel and aluminum, and Europe, Canada, and Mexico retaliated with tariffs of their own that were aimed at Harley-Davidson.

The bike maker has said the cost of the higher import duties will raise the price of its motorcycles by $2,200 on average, but it has chosen to absorb the costs. That way its international dealers don't have to actually increase bike prices and Harley said it will be moving some production of motorcycles for the European market to its foreign assembly plants.

In the U.S., it is going to have to contend with high raw materials costs as U.S. steel and aluminum prices have surged 45% since the beginning of the year. While Harley-Davidson has mostly kept quiet about the effects of the president's trade policies, it did revise downward its guidance for operating margins, which it now says will be in the 9% to 10% range compared to its previous estimate of 9.5% to 10.5%, because of the impact of the tariffs.

The market seemed to find encouragement in Harley's sales results being slightly less bad than they were last quarter, but that's cold comfort as the company remains in a deep slump with little indication of how it will pull out of it. Maybe the upcoming strategy event will truly rip the cover off how Harley-Davidson will achieve its ambitious goals, but the bike maker isn't exactly known for life-altering news, and it's quite possible it will simply be more of the same. And that's a worrisome possibility.