Columbia Sportswear (NASDAQ:COLM) markets its activewear to do four simple things: "keep people warm, dry, cool, and protected so that they can enjoy the outdoors longer."

Those words certainly describe how long-term shareholders must feel. The stock has climbed more than 1,000% over the past two decades, while the S&P 500 is up only 156%. Over the last 10 years, Columbia's stock has managed to outperform both the S&P 500 and the SPDR S&P Retail ETF, as you can see in this chart. 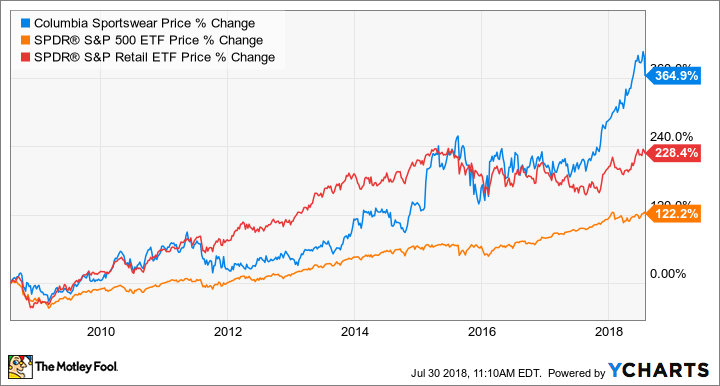 This outperformance is notable because retailers and apparel makers have experienced two recessions over the last decade. There was the broader economic slowdown in 2008/2009, and then starting around 2015, the retail industry struggled as consumers started watching their purse strings.

Despite sluggish industrywide growth, Columbia has continued to perform well on the top and bottom line, and investors have taken notice. Let's take a closer look to find out if the stock is a buy in spite of its epic run. 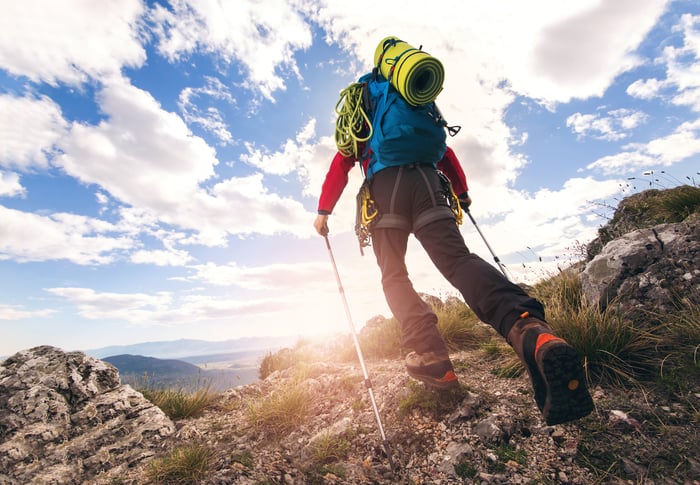 One thing that stands out about Columbia is that it's essentially a family run business that just happens to be publicly traded.

Columbia was founded by the Boyle family in 1938 after they fled Nazi Germany and found a new home in Portland, Oregon. After some tough times in the early years, the family wisely turned down an offer to buyout Columbia for $1,400. All officers and directors of the company own 57% of the shares. CEO Tim Boyle owns 36% and Chairman Gert Boyle owns 14%.

Under its three primary brands -- Columbia, Sorel, and prAna -- the company today generates over $2 billion in annual sales and has seen steady growth on the top and bottom line.

The Columbia brand is the largest of the three with roughly $2 billion in trailing 12-month sales. With the slow industry sales trends over the last few years, Columbia segment sales increased just 4% in 2017. But things have started heating up this year as consumer spending has strengthened.

For the first half of the year, total net sales surged 16% year over year. The company has seen success with its PFG footwear, as well as new innovations like its Omni-shade sun deflector cooling technology. Columbia has also seen strong demand over the last two years for its Star Wars branded apparel, which sold out within minutes online this past December.

But the true sign of how well things are going right now for the company? Columbia reported its first second-quarter profit since 2007 -- significant since its typically the lowest volume quarter of the year for the business. Profitability has improved thanks to margin expansion, with gross margin up 190 basis points to 48.5% this year, and operating margin nearly doubling year over year to 6.3%.

These margin improvements have powered a 120% year over year increase in earnings per share. Management attributes these gains to "clean" inventory levels which has driven a higher mix of full priced sales.

Columbia has historically been a fairly consistent performer. Other than a few hiccups around economic slowdowns, such as 2008, the company regularly grows sales and profits every year. Management has accomplished this while carrying very little or no debt.

I think the company's success comes down to two things: 1) the high ownership stake of the Boyle family, which helps them run the business for long term shareholders as opposed to Wall Street's nearsightedness, and 2) the health of the activewear market, which has steadily grown at a mid single-digit rate over the last decade.

Both of those seem here to stay, so there's really nothing to not like about Columbia as an investment. The problem for investors right now is that the stock seems to have shot out of a cannon lately. Its up 40% over the last year, which has pushed its forward P/E ratio to a relatively high 25 times management's earnings guidance for 2018. This earnings multiple is way above its historic average of about 20 times earnings.

Investors should be wary to buy the stock at these levels. While Columbia is performing well, management's 2018 guidance calls for about 15% earnings growth and high single digit sales growth over 2017. That seems a little low given the company's valuation.

Columbia Sportswear Is Trouncing the S&P 500, But is the Stock a Buy? @themotleyfool #stocks $COLM Next Article
Current