Seritage Growth Properties investors no longer have to wonder how the Sears Holdings spinoff will fund the redevelopment of its real-estate portfolio.

First, Sears and Kmart remain its primary tenants. Both chains are shrinking rapidly and could disappear entirely within a few years, pressuring Seritage's near-term rental income. Second, while Seritage has plans to profitably redevelop buildings currently occupied by Sears and Kmart for new tenants that would pay significantly higher rents, finding funding for these projects has been a constant struggle. Fortunately, Seritage Growth Properties laid those funding concerns to rest once and for all on Tuesday. The REIT announced a new $2 billion term loan facility with an affiliate of Berkshire Hathaway (BRK.A -0.16%) (BRK.B -0.34%). This will allow management to focus on executing the transformation of Seritage's properties.

Seritage Growth Properties' strategy is very simple. At the time of its spinoff, it executed a master lease with Sears Holdings to lease back virtually all of its properties to Sears and Kmart at very low rents. The master lease allows Sears to terminate the leases of underperforming stores (for a small penalty), while Seritage can recapture 50% to 100% of the square footage of each property (with proper notice).

Over time, Seritage plans to recapture space from Sears Holdings and redevelop most or all of the buildings it owns for higher-paying tenants. Usually, this entails subdividing Sears and Kmart stores for smaller tenants. Seritage also has opportunities to redevelop some of its assets into larger-scale mixed-use developments.

Berkshire Hathaway Chairman and CEO Warren Buffett sees the long-term promise in Seritage's strategy. Back in late 2015 -- the same year Seritage went public -- Buffett bought an 8% stake in the company in his personal account.

While this was an unusual move, Seritage's market cap has bounced around between $2 billion and $3 billion in recent years. Berkshire Hathaway usually keeps its ownership stakes in other public companies below 10%, making Seritage too small a fish for the massive conglomerate. 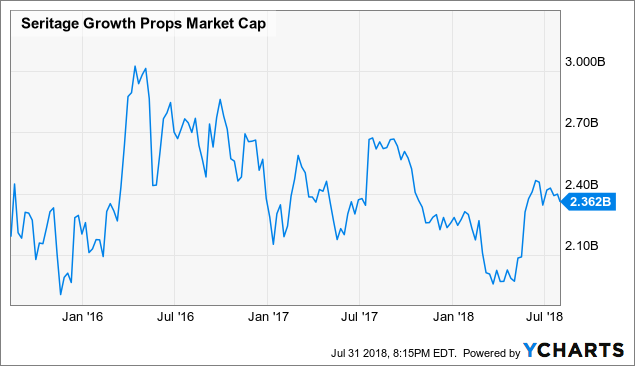 Seritage had a capital shortage

While Sears and Kmart have been closing stores at a phenomenal rate, this wasn't a concern for long-term investors in Seritage Growth Properties. After all, the REIT wanted to upgrade to higher-paying tenants over time.

The real issue was that it was becoming hard to fund Seritage's redevelopment plans. At the end of the first quarter, Seritage estimated that the redevelopment projects it was currently working on would have a combined cost of nearly $1.3 billion, with $882 million still left to be spent.

Seritage has tried to plug the gap by selling some noncore properties while bringing in joint venture partners to help fund the redevelopment of others. However, neither of those solutions is appropriate for every property in the portfolio.

No more worries there

The new loan from Berkshire Hathaway Life Insurance Company of Nebraska puts Seritage on a much more solid footing. The five-year loan provides $1.6 billion at closing, which Seritage Growth Properties used to retire all of its other debt. (It had about $1.3 billion of outstanding debt as of the end of March. The Q2 figures will be published later this week.)

The loan also includes a $400 million incremental funding facility that Seritage can draw upon when needed. The net result is that Seritage now has more than $600 million of cash on hand for redevelopment projects, plus another $400 million that it can access in the future.

Berkshire Hathaway is getting a juicy 7% interest rate on this loan. Still, given that Seritage expects to earn an 11% return on its redevelopment projects, there's a good spread between its cost of capital and its expected returns. Furthermore, when this loan matures five years from now, Seritage will (hopefully) have a much more profitable and diversified portfolio, allowing it to refinance at a lower rate.

In the meantime, Seritage's management can plan for the future without worrying about funding. The Berkshire Hathaway loan provides more than enough capital to complete the redevelopment projects currently on Seritage's plate. And Seritage can still pursue joint venture deals and asset sales -- at a more leisurely pace -- to help fund future redevelopment work beyond 2020.